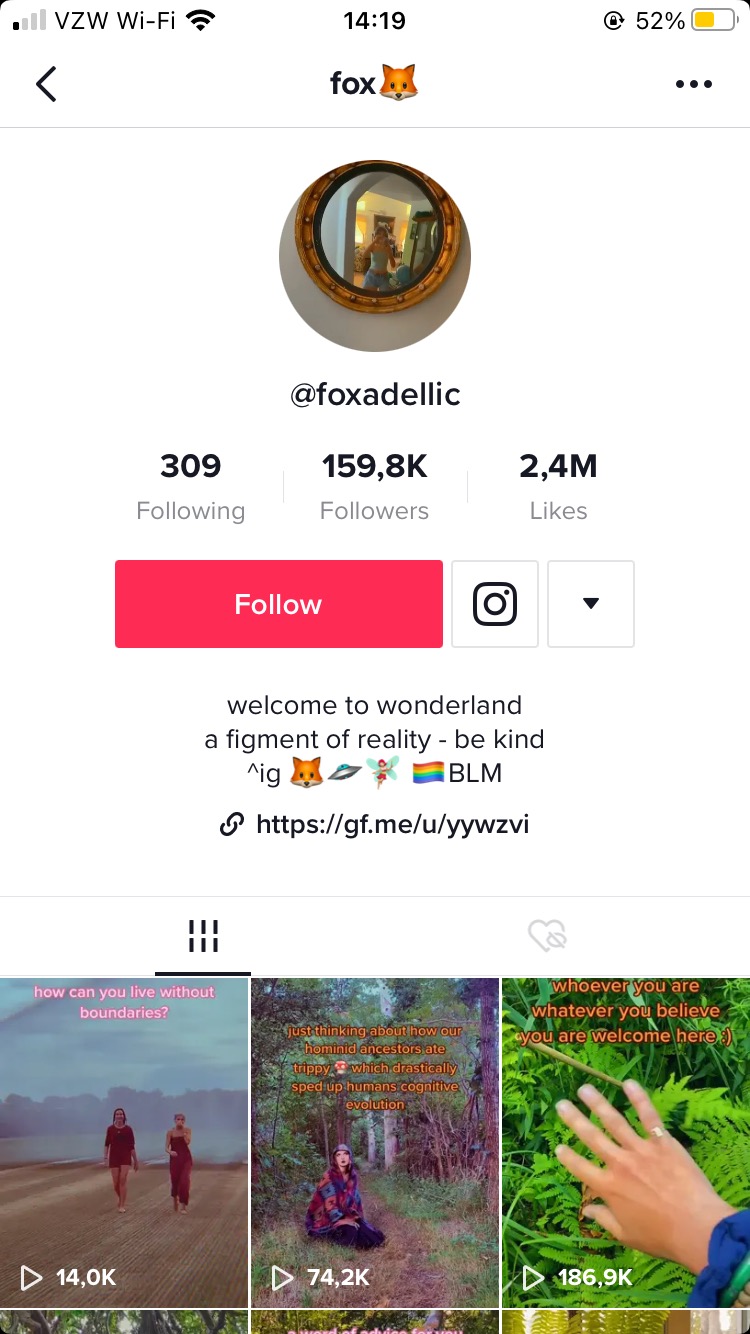 For many, TikTok has been the much-needed distraction from the overwhelming amount of bad news 2020 has to offer.

Part of the beauty of the app’s algorithm is that content is curated for each specific user, designed to cater to each user’s specific interests. While many of these subgenres revolve around styles of comedy or taste in pop culture, one University of Rhode Island student has tapped into a niche all her own.

Logan MacDonald, a sophomore film/media major from Massachusetts, has built a growing audience on TikTok with content centered around spirituality, energy and connection to nature and the universe. Her account, @foxadellic, has amassed over 150,000 followers, 2.4 million likes and her videos regularly get tens of thousands of views each. Her most popular video currently sits at over 2.9 million views and has 750,000 likes.

MacDonald was initially drawn to the app as a creative outlet during quarantine. It didn’t take long for her to achieve viral success, and soon enough she was communicating with thousands of like-minded people, many of whom she feels a genuine connection with.

“I see phones as portals,” MacDonald said. “I’ve found so many people who are on the same wavelength as me, and I’m friends with all these people now. I talk to them every day through the internet, even if they live thousands of miles away.”

As a “conscious creator,” MacDonald uses her videos to spread love, positivity and wisdom of people’s own intrinsic connections to the universe. More than a creator, she hopes to be a guide for people to unlock spiritual elements of the subconscious mind that are often suppressed under the harsh realities of the physical world.

“[The subconscious mind] is your connection to the spiritual realm,” MacDonald said, “like we’re here in these physical bodies and this physical reality, but not everything is that. Our true nature always shines when we’re meditating or sleeping. Those are things that happen in a different plane of reality.”

Sebastian Toledo, a junior and friend of MacDonald, found comfort in her stories of personal growth and her natural imagery.

“Her content is what you would describe as her journey to spiritual enlightenment through nature,” Toledo said. “Her content is friendly, there are no negative messages she is attempting to get across.”

Although she appreciates the notoriety she has gained on her corner of the internet, MacDonald’s content has also caught the attention of many detractors from outside of the spiritual community. Her most popular video has been reshared on Facebook, Twitter, Reddit and 4chan, with comment sections filled with people bashing her and her content.

While the negative attention did initially take a toll on her mental state, MacDonald does not let the hate affect her in the same way it used to.

“People get mad when they are uncomfortable,” MacDonald said. “The purpose of being a conscious creator and a leader of the conscious revolution of opening your mind and expanding your consciousness is you are going to receive an intense amount of hate from people who don’t understand that. If I’m not receiving hate, that means that I’m not doing my job as a conscious creator.”

Toledo saw some of the negative comments firsthand after he found her video got reshared on Twitter. He urged those commenting to consider the person behind the screen before they made any judgements about her character.

“I think people need to take social media, and especially what people post, as lightly as possible,” Toledo said. “Feeling artificial anger for a person who is sharing what they’re into is as low as a person can get.”

MacDonald hopes fans and detractors alike can watch her videos with an open mind, and that people’s egos do not get in the way of her goal to spread love.

Pride Month Time of Reflection for LGBTQIA+ Staff and Students