When I was growing up in Britain in the 1970s, St. Patrick’s Day didn’t exist. The conflict in Northern Ireland was at its bloodiest, and it was not a time when British cities would open their civic spaces for a celebration of things Irish. My sense of what St. Patrick’s Day looked like was informed by the odd news story about celebrations in the U.S. The day appeared as something that was more about Irish America than it was about Ireland.

Years later, I was in a bar in Dublin with a friend discussing Irish history topics that needed to be written about. We agreed that the most obvious Irish date in the calendar, March 17, had never been touched by scholars, and a journey thus began. For the pair of us, the following years were all about understanding parades, Irishness, green beer, and corned beef and cabbage. We looked at a number of countries to try and comprehend why the Irish, perhaps above any other national group, have so successfully exported their national day so that it’s now a global phenomenon. The day is now celebrated in the form of parades, parties, and festivals on every continent.

The modest observance of St. Patrick’s Day in Ireland dates back to the 17th century, as a religious feast day that commemorates the death of St. Patrick in the fifth century. Patrick is credited with having brought Christianity to Ireland, and as such became a figure of national devotion and, in due course, the nation’s patron saint. The day’s importance was confirmed in 1631 when it was recognized by the Vatican.

For most Irish people at home, the day remained primarily religious into the 20th century. The elite of Irish society did mark the day with a grand ball in Dublin Castle each year in the second half of the 19th century. But for the public at large, it was a quiet day with no parades or public events. The day wasn’t even a public holiday in Ireland until 1904.

In the 20th century, the day became a public spectacle, with a military parade running through Dublin’s streets from the 1920s to the 1950s. Right through this period, the day was rather somber: mass in the morning, the military parade at noon and—this will shock American readers—the bars across the country closed for the day. (Irish bars didn’t begin opening on March 17 until the mid-1960s.) The military parade was replaced by a more general parade of floats and entertainment beginning in the 1960s, which in turn was transformed, in 1996, into the St. Patrick’s Festival, which still runs to this day. It’s a four-day event of music, treasure hunts, performances, and of course, on the day itself, a two-hour parade that draws up to half a million people onto the streets of Dublin.

But to understand the day and its significance is to tell an American rather than an Irish story.

The shift in the 1960s, after all, to a parade in Dublin (and many other Irish towns and cities) that was celebratory and fun was directly inspired by what was happening in the real home of St. Patrick’s Day, the U.S. The first recorded celebrations of March 17 took place in Boston in 1737, when a group of elite Irish men came together to celebrate over dinner what they referred to as “the Irish saint.” The tradition of parading began amongst Irish Catholic members of the British Army in New York in 1766 when the day “of St. Patrick, Saint of Ireland, was ushered in with Fifes and Drums,” as described in J.T. Ridge’s 1988 history of the New York parade.

The day grew in significance following the end of the Civil War and the arrival, across the 19th century, of ever increasing numbers of Irish immigrants. Facing nativist detractors who characterized them as drunken, violent, criminalized, and diseased, Irish-Americans were looking for ways to display their civic pride and the strength of their identity. St. Patrick’s Day celebrations were originally focused on districts where the Irish lived and were highly localized. Through the use of symbols and speeches, Irish-Americans celebrated their Catholicism and patron saint and praised the spirit of Irish nationalism in the old country, but they also stressed their patriotic belief in their new home. In essence, St. Patrick’s Day was a public declaration of a hybrid identity—a belief in the future of Ireland as a nation free from British rule, and a strict adherence to the values and liberties that the U.S. offered them.

By the end of the 19th century, St. Patrick’s Day was being observed on the streets of major Irish cities such as Boston, Chicago, and New York, as well as in other cities such as New Orleans, San Francisco, and Savannah. The evolution of highly localized Irish celebrations to broader public events and parades tracked the rise of Irish-Americans in local governments. In the face of growing nativist opposition, to parade down major avenues in city after city announced that Irish-Americans were numerous and powerful, and not going anywhere.

The tradition of celebrating St. Patrick’s Day grew across the U.S. and became a day that was also celebrated by people with no Irish heritage. By the 20th century, it was so ubiquitous that St. Patrick’s Day became a marketing bonanza: greetings cards filled drugstores, imported Irish shamrocks (indeed anything green) showed up on T-shirts, and the food and drink that became associated with the day became bar promotions. Corned beef and cabbage—rarely eaten in Ireland but commonplace in American cities as a springtime dish—became the meal for March 17. Dietary innovations for the day have grown over the years with all types of green food, including milk shakes, beers, and candy. Once a food giant like McDonald’s latched onto the marketing potential of St. Patrick’s Day, it was clear that celebrating had jumped from a solely Irish day into the American mainstream.

The power of St. Patrick’s Day in the U.S. was its ability to survive and then spread. It survived over the decades because generations of Irish immigrants were eager to celebrate their origins. The sheer number of those claiming Irish descent in the U.S., coupled with their mobility and assisted by a network of Irish societies and the forces of Irish commerce (namely Guinness and the ubiquitous Irish bar in very town) has meant that St. Patrick’s Day celebrations have spread across the country.

The holiday also spread by becoming a means for all Americans to become Irish for the day. The shared sense of being Irish, of wearing green and in some way marking March 17, has resulted in St. Patrick’s Day being observed in a similar fashion to July Fourth or Halloween. It’s the closest thing in America to National Immigrant Day, a tribute not only to the Irish, but to the idea that Americans are all part “other.” That may be why the holiday was slower to take off among the Irish diaspora in other nations around the world, where people are less comfortable with hyphenated identities.

Only more recently, once it was established as a bona fide American cultural phenomenon, and again aided by such Irish cultural ambassadors as U2, Guinness, and those ubiquitous pubs, did St. Patrick’s Day become a full-fledged celebration—whose spirit was re-imported in its Americanized form back to Ireland itself.

So, wherever you may be on this day, raise a glass to toast not only good old Ireland, but America’s interpretation of it as well.

Mike Cronin is a professor at Boston College and the academic director of its program in Dublin. He is the author, with Daryl Adair, of The Wearing of the Green: A History of St. Patrick’s Day. He wrote this for What It Means to Be American, a national conversation hosted by the Smithsonian and Zocalo Public Square.

Listen to the most important stories of the day.

TIME Ideas hosts the world's leading voices, providing commentary on events in news, society, and culture. We welcome outside contributions. Opinions expressed do not necessarily reflect the views of TIME editors.

Each product we feature has been independently selected and reviewed by our editorial team. If you make a purchase using the links included, we may earn commission. 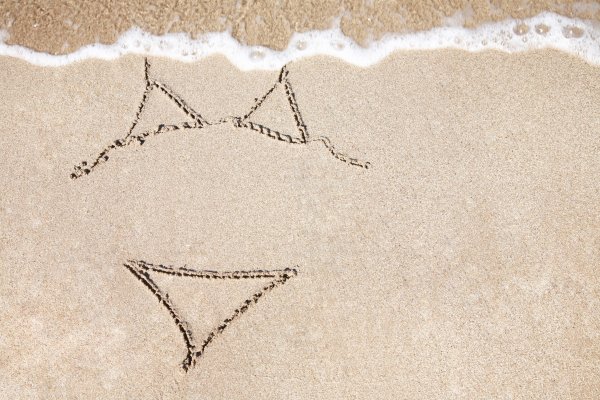 A Feminist Answer to 'Swimsuit Season': Raid Grandma's Closet
Next Up: Editor's Pick