Those living on Toronto’s streets have faced the brunt of extreme weather this year.

At least 70 people experiencing homelessness have died so far in 2017, according to records from the City of Toronto. Of these 70 deaths, over half were people under 48 years old and 57 were men.

Yogi Acharya, an organizer with the Ontario Coalition Against Poverty, said the homeless aren’t given the help they need because of limited resources. 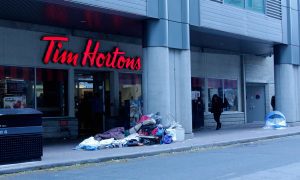 Individuals sleeping outside the Tim Hortons on campus. (Photo by Isabella Perrone)

“Despite the extreme cold weather warning, no emergency spaces were opened,” Acharya said. “Instead of opening shelters, the city wants to talk about adding warming centres.

“The problem is that they are being used as a venue to cram people in. They don’t have beds and there aren’t adequate showers or food support systems available.”

Acharya said that because there aren’t enough shelter beds for Toronto people experiencing homelessness, spaces like the Moss Park Armoury could be used to house people from the freezing temperatures.

“I think the decent thing to do is to allow people to use space. The city knows it takes time to open a shelter, and no one’s debating that it takes time. But the number of deaths this year so far is an emergency situation,” he said.

“People should not be dying at the rate they are dying at, and if it were happening in any other neighbourhood to any other group, the city might be taking action faster.”

Ryerson’s location in the downtown core means that the university could be affected by these deaths as well.

Pascal Murphy is an instructor in the areas of homelessness, disasters and social and environmental justice at the Chang School, as well as the president of St. Clare’s Housing in Toronto. Murphy said the crisis has stayed the same even though more information on it is available.

“I can point to a few different things: one is that the shelters themselves aren’t adequate enough. There’s a long waiting list so people don’t have access to what they need,” Murphy said.

While Ryerson has taken steps to help those experiencing homelessness on and around campus, Murphy believes that a national housing system needs to be reinstated. The former system was cancelled in 1994, and Murphy said that the cancellation has been, “catching up with us every single day because we’re not funding it.

“Ultimately, you have to understand that shelters are a band aid, and various services to try and get people off the street are a band aid unless we actually provide realistic alternatives.”

While more services to help keep people out of the cold are available during the winter months, many of these efforts don’t help the overall issue.

“You can put various policies in place and services and so forth and so on but if you’re ultimately not housing people, then the situation is not going to drastically change,” Murphy said.

Recent research from Toronto Public Health has suggested that in Toronto, there are instances where people have been more likely to die from heat exposure than cold exposure.

Murphy said the research contradicts what most people’s ideas of the problems people experiencing homelessness are, and that the amount of services offered in the summer months is far less than what is offered during the winter.

My name is Rita,I’m on a basic income and try to do my part in helping the homeless and vulnerable.I make sandwiches,have clothing drives,every little bit helps.I ask the public please if you see someone homeless or in distress,please try to check on them and ask if they are okay.I go out in the,evening anytime I can,with or without my grandson.I have made my friends,family and strangers aware,yes this is ate crisis.It doesn’t have to be Christmas to help people.It could anytime of the year,please open up your heart,I often think,that could be my sister,brother,that could be me,scary.If you don’t have change or food to offer a homeless,offer them your heart and time,that could make a difference or even change their life.God Bless Everybody,my favourite saying”every little bit helps.”