A closer look at recurring Islamophobia in campus politics

By Nicholas Baxter and Hirra Farooqi

Ali Yousaf prepares for his campaign in the comfort of his bed on an early January morning when he starts receiving phone calls urging him to get to campus.

Yousaf is running for the position of vice-president operations for the Ryerson Students’ Union (RSU) for 2017. He doesn’t know that what he is about to see, would put a damper on his campaign and impact him psychologically.

Unaware of what’s happening, Yousaf receives a photo on his phone while on his way to school that shows one of his campaign posters vandalized with words that deeply disturb him.

“No Muslims allowed in this country.” 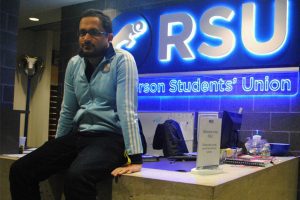 Ali Yousaf, vice president of operations of the Ryerson Student Union, had
Islamophobic remarks made on his campaign poster during the RSU elections of 2017. (Photo by
Nicholas Baxter)

Suddenly, the desire to make a change turned Yousaf into a victim of Islamophobia, in a school he deemed safe from racial and religious discrimination.

Yousaf declined to comment to campus news at the time because he was not ready to have a conversation on the incident and he did not want it to be the centre of attention.

But now, nearly one year later and as current vice-president of operations for the RSU, Yousaf was ready to reopen old wounds and speak about the incident.

“I was disappointed because I used to think Ryerson was a diverse campus where people will respect your race, religion and beliefs, but that didn’t turn out to be the case,” Yousaf said.

The photo of the vandalized poster had immediately gone viral, pushing Yousaf into a spotlight he didn’t ask for. Yousaf admitted the attention took a toll on him and distracted him from his campaign. He needed a break.

“I was extremely disturbed by it, and it, all of a sudden, became a hot topic,” Yousaf said. “It became too much for me at that point, and I remember I took three or four days off from my campaign just because it’s a topic I didn’t really want to talk about.”

This isn’t the first time Islamophobia interfered with student politics at Ryerson.

Obaid Ullah, former vice-president operations for the RSU in 2015, also had two of his posters vandalized with Islamophobic remarks during his campaign period.

One read, “ISIS for life,” and the other read, “Muslims are terrorists.”

“At that time I had a big beard and it was pretty fluffy, so based on my skin colour, my appearance and my name, they affiliated me with ISIS,” Ullah said. “Seeing this happen at Ryerson, in a community so diverse and inclusive, was pretty surprising.”

Rabia Idress was the vice-president equity for the RSU at the same time Ullah was in office. She said she was sad to see Muslim students discriminated for wanting to make school a better place.

“It’s concerning to know that there are people I see on Gould Street, who are studying in a multicultural hub, that are so ignorant and passionate about their ignorance that they have to vandalize the efforts of Muslim students trying to get involved in the political process,” Idress said.

Yousaf said that what happened to Ullah was unexpected. Though the two didn’t know each other, Yousaf felt the need to reach out to him.

Ullah said he was surprised to see the same thing happen to Yousaf a year after it had happened to him.

Osama Ahmad is a fourth-year engineering student at Ryerson. While running for vice-president external for the Ryerson Engineering Student Society (RESS) in 2015, Ahmad’s posters were also vandalized with Islamophobic slurs and drawings. 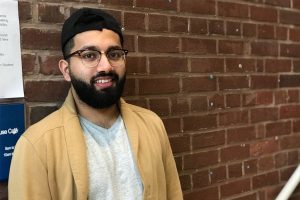 Osama Ahmad ran to become the vice president of finance during the 2016 elections for
the Ryerson Engineering Student Society. (Photo by Hirra Farooqi)

Ahmad was told that someone had referred to him as Osama Bin Laden on one of his posters.

He also found one of his posters with a turban drawn on his head and scratches on his face.

Ahmad said the lack of education on Islam affects him more than the remarks made against him.

“After this incident, I personally did not feel threatened and I was not scared to go on campus or continue campaigning,” Ahmad said. “However, I did feel that people have the wrong idea of what Islam is, what a Muslim name is or means.”

A 2013 poll conducted by The Angus Reid Institute found that 54 per cent of Canadians held an unfavourable view of the word ‘Islam’, though the Arabic word derives from the word ‘al-salam’, which means ‘peace’.

Ullah said the ideologies that peg Muslims as harmful are subconsciously influenced by world events and the words of those in power, who continue to manipulate Muslim ideologies.

“When leaders that people look up to take bold measures and make big statements, it impacts the people that follow and they’re more encouraged to speak about their concerns,” Ullah said.

“It seems that people have become more vocal about their hate towards certain types of people and it’s very unfortunate.”

Amina Jamal, a sociology professor at Ryerson, said Islamophobia has been on the rise since the 2001 World Trade Centre, where the terrorists were identified as Muslims by U.S. officials. 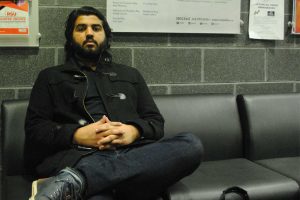 Obaid Ullah, former vice president of operations, of the Ryerson Student Union, had
Islamophobic remarks made on his campaign posters during the RSU elections of 2015. (Photo
by Nicholas Baxter)

A project conducted by the Breakthrough Institute that looked into counter-terrorism since 9/11 found that the enhancement of the U.S. government’s religious/ethnic profiling in the wake of the attacks strongly affected Muslim-American citizens.

“Governments tend to amplify the idea that all Muslims are terrorist-sympathisers,” said Jamal. These incidents will likely restrict Muslim students’ abilities to engage in politics in a healthy manner.

Yousaf and Ullah believe their experiences with Islamophobia while running for their positions with the RSU were influenced in part by world events targeting Muslims at the time.

During Ullah’s campaign, the Syrian refugee crisis and the rise of ISIS both dominated international media coverage. Ullah said he wouldn’t be surprised if the increased tension caused by the state of the world played a role in the decision to vandalize his campaign poster.

The vandalization of Yousaf’s poster the following year was during Donald Trump’s presidential campaign, and also came one day after a shooting in a Quebec Mosque.

Yousaf said he is certain that Trump’s rhetoric and skewed ideology surrounding Muslims played a role in his experience with Islamophobia as well as the shooting.

“Whoever has the same mentality as (Trump) started becoming a lot more vocal (on their stance against Muslims),” he added, referring to when Trump’s campaign took off.

Despite his unwillingness to speak about his incident, Yousaf used the temporary social media spotlight it created, allowed him to encourage students to attend the vigil for the Quebec Mosque shooting.

Though Yousaf has yet to face another Islamophobic encounter, he said he constantly thinks about being discriminated and is afraid that it will happen again.

“I fear all the time that whenever I face some sort of criticism, I’m being discriminated because of my beliefs,” Yousaf said.

“It’s not true because it (being a victim of Islamophobia) hasn’t happened to me since then, but it does leave me with the thought that it can happen in the future.”

Ullah said his encounter with Islamophobia didn’t affect him negatively because of the widespread support he and his campaign gained after the fact.

“It really had the campus come together, and everyone showed that these types of instances are not tolerated,” Ullah said. “It really gave awareness to the RSU elections in general, and it united students to know about what was happening and for them to look into the situation.”

Ullah said it’s sad that people still possess these ideologies and Islamophobic incidents still occur on campus, but that there is possibility for change.

“I just wish there was more open dialogue between those who hold those types of opinions and those who are on the other end of the spectrum,” he said.

“People who hate certain types of people have some sort of ill thoughts that were instilled in them at a young age and they’re not thinking about it, so I would really like to see a conversation happen.”