Ingrid Masak Mida gently tugs on a fresh pair of disposable latex gloves before gingerly arranging a brilliant green Victorian dress on the piece of canvas covering the counter in front of her — the colour of it is so eye-catching that the wrinkles and faded yellow spots are hardly noticeable. She picks and pulls delicately at the sleeves and skirt to display it as true to its form as possible, the green material catching and reflecting the light all the while.

This dress is part of a private collection recently donated to the Ryerson school of fashion by a former professor. The fashion research collection is a library of more than 3,000 garments dating back to the mid-19th century, which are available for all Ryerson students to view up close and handle under supervision.

The dress in particular caught the attention of Mida, the Ryerson fashion research co-ordinator, because of its bright apple-green shade. She instantly had an inkling that the bright colour had a much darker past.

“Just from experience, I had a feeling that this was the arsenic green as soon as I saw it,” she said.

Tests done on the dress came back positive for arsenic.

Because of its style, Mida can date the dress roughly back to the 1860s. She said that shade of green was very popular during that time and the pigment was achieved through a mixture of copper and arsenic.

Following her hunch, she spoke with Alison Matthews David, a Ryerson fashion associate professor. Matthews David curated the exhibit on display now at the Bata Shoe Museum called, “Fashion Victims,” and will be publishing a book of the same name next fall. She has done extensive research on how dress has negatively affected wearers and makers alike throughout history. Seeing the shade of green, she and Mida sent the dress to the Ryerson physics department for testing.

Eric Da Silva, a PhD student with the Ryerson physics department, tested the dress with a procedure called X-ray fluorescent spectrometry — the dress is radiated with an X-ray tube, and the rays coming off of the dress are measured to tell what elements are present in the fabric. It doesn’t measure how much of the element is present, just that it’s there.

Matthews David began her research into physically harmful 19th-century fashion 10 years ago. She says she was the first to prove the presence of arsenic in fabrics. The chemical had previously only been tested and proven present in paper dyed with the same pigment. In her research, Matthews David tested children’s garments from museums in London and pieces from the Bata Shoe Museum that came back positive before this dress came into Ryerson’s possession. She and the Ryerson physics department collaborate often on tests of this nature.

The arsenic green was used extensively in the late-19th century because people craved colour among cities that were becoming built up and grey, said Matthews David.

“Cities became increasingly industrialized and people were yearning for the green of nature,” she said. “They were dying everything green, from wallpaper to dresses.”

Matthews David said it was also popular in fashion because it was technically a pigment, not a dye. This means that it did not fade like other dyes.

But, it was still highly toxic. Much like “mad hatters” who got mercury poisoning, many dressmakers fell ill from exposure to the pigment and died young. Wearers were not as seriously affected, she said, but would sustain skin rashes after prolonged direct contact with the fabric.

The colour plunged in popularity as quickly as it had risen to it.

“Newspapers at the time started printing images of skeletons wearing arsenical green ballgowns,” she said. “People started saying, ‘get me away from those greens.’”

The dress, donated by Kathy Cleaver from her private collection, is Canadian in origin, although all information about the original wearer is lost. It comes in three pieces: a three-quarter-sleeve button-up top, a skirt and an apron-like belt to be tied around the waist at the back. Because of its higher, squared neckline (rather than a plunging neckline), Mida said it was likely worn for formal daytime events and not as a ballgown.

The poisonous dress remains part of the school of fashion’s research collection and can be viewed by appointment by any Ryerson student. 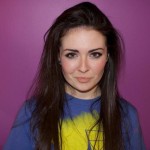