At Union Station in a sea of large Canada Goose jackets and Sorel snow boots, there always seems to be that one girl who stands out; the one who dresses as if the weather doesn’t bother her.

She wears a flared skirt, exposing her legs along with a short leather jacket. She would wear anything to look good, even in minus degree weather.

She is a victim to fashion.

The lengths to which people go in the name of fashion dates back hundreds of years. An exhibition, Fashion Victims: the Pleasures and Perils of Dress in the 19th Century, explores the deadly fashion of the 19th century.

Wide-shot view of the exhibit, Fashion Victims: the Pleasures and Perils of Dress in the 19th Century. (Daisy Badu / Ryersonian Staff)

“We are a product of this history that was being established in the 19th century,” said Elizabeth Semmelhack, senior curator of The Bata Shoe Museum in Toronto, home of the exhibition. “We are seduced by fashion; fashion’s new colours, new shapes, new textures. All of these things influence us as readily as they did to consumers in the 19th century.”

Semmelhack partnered with Alison Matthews David, a fashion professor at Ryerson University, receiving a grant to help create the exhibition that takes a look at exclusive clothing and footwear of the past.

“It’s a period that sees the human effects of the industrial revolution… it was an important shift of the way things were, both made and purchased,” said David.

One of the exhibit’s popular pieces includes beautiful emerald green shoes. They may be wonderful to look at, but the story behind them isn’t quite as pleasing.

“That was a gorgeous new colour … a new pigment.” said David.  “But it was made using arsenic.”

One of the 19th century-inspired dresses on display at the Bata Shoe Museum exhibit. (Daisy Badu / Ryersonian Staff)

The shoes and gloves of Empress Elisabeth of Austria, are a few of the main attractions in the exhibit. Her narrow high heeled shoes to create the desirable feature of slender feet.

The curators hope the stories behind the items on display leave lasting impressions on all visitors.

“From the shift over the 19th century of artisanal shoemaking or craftsmanship to it becoming a fractured process whereby people become factory workers. All of these instances I think have great ramification, great reflection today,” said Semmelhack.

The exhibition opened in June of 2014 and has received great reviews from The LA Times and the National Post. Semmelhack and David were featured in an episode of BBC’s Murdoch Mysteries entitled The Devil Wears Whalebone.

The exhibition is open to the public until June 2016. 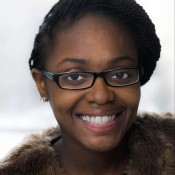 Study space at new SLC is one less @RyersonProblem

Date set for next stage of Ghomeshi trial