Alleged assault at Ram in the Rye leaves student with broken eye-socket, nose

No arrests have been made in an alleged assault that left a Ryerson student with a broken eye-socket and nose, at the Ram in the Rye early last Thursday morning.

The 21-year-old victim was involved in an argument in the washroom, which escalated into an alleged assault, police said. 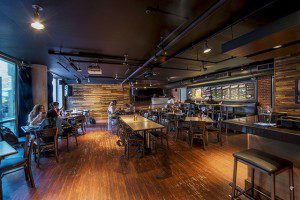 Police said the 21-year-old victim was involved in an argument in the washroom, which escalated into an alleged assault. (Photo courtesy of the Ryersonian archives)

The suspect, who police described as a brown-skinned male in his twenties, fled the scene.

The Ram was closed down for the night following the incident.

“When it happened, we shut the pub down,” said Jennifer Stacey, general manager of the Ryerson Student Campus Centre.

Police spokesperson Const. Allyson Douglas-Cook said that no arrests have been made but if identified, the suspect will be charged with assault causing bodily harm.

Ryerson security responded to the scene and gave medical help to the injured student, checking vital signs, making sure his airways were open and that he was comfortable.

“From our aspect, we attended and offered patient care to the student,” said Tanya Poppleton, manager for security and emergency services.

Hospital staff were the ones to notify police when Ram in the Rye staff dropped the victim off for medical attention.

Douglas-Cook said 51 Division is looking into the incident and no more information can be released as it is an ongoing investigation.