An inside look into the lives of Ryerson’s TV stars

For most people, the path to adulthood and maturity is a difficult but necessary one. Often the growth happens gradually, perhaps starting with a change in our outward appearance, and eventually we begin taking on more responsibilities in our communities and surroundings. At some point in our lives, we all decide we want to be taken more seriously. We shed the skin of our naïve immaturity, and start to truly consider our path in life. But for two Ryerson students and actors, this coming of age is a little more complex. Jadiel Dowlin, 20, and Torri Webster, 22, had to also mature in the entertainment business. The latter graduated from Ryerson’s creative industries program last year and the former currently studies philosophy and film studies. Both acted in children’s shows during their childhood and are now transitioning to become young adult actors, hungry for more ambitious content.

Both actors found their footing in showbiz in their early teens, with films and television shows on YTV and the Family Channel, two quintessential stations in every young Canadian’s childhood. In 2016, YTV was the top TV channel in Canada, across the tween and teen demographics, available to over 11 million households. Most notably, it hosted the Canadian première of Sailor Moon and Mighty Morphin Power Rangers, and licensed the Canadian rights to Pokemon and Dragonball Z. The Family Channel is similarly popular. It licenses most of its content from the Disney Channel, and brought over hit American shows like The Suite Life of Zack & Cody, Hannah Montana, and Cory in the House.

When Dowlin was 13, he did a few commercials before landing a spot on a YTV reality show where kids got to judge adults as they duke it out in various challenges gladiator-style. “I did this show called Zoink’d on YTV, that led to a lead role in this other awesome sci-fi kids show called Annedroids. But my role in Nickelodeon’s Star Falls, that’s probably the biggest project I’ve done so far,” says Dowlin.

Annedroids, which was created by Amazon Video and aired from 2013 to 2017, earned him a Joey Award and a Young Artist Award for Outstanding Young Ensemble in a TV Series in 2015. The praise of the show and Dowlin’s performance served as a jumping point for him to do more serious, higher-profile work.

Webster found her passion for theatre while attending Wexford Collegiate School for the Arts, a high school in Scarborough. It was during this time that she started to set her sights on television and film. During her four years there, her career really picked up, causing her to split her education between the classroom and on-set tutors, which Webster says was, “good and bad.” “When you’re the lead on a sitcom, you’re doing about 10 pages of dialogue a day, so the memorization takes up so much of your time,” she says. “Then at the end of the day you have two hours to do at school.” Despite having to face a unique form of adversity at a young age, it allowed her to get “the big break” so many actors spend their lives working for.

“My focus began on stage, and then when I was about 12 years old, it transitioned into film, which was tough for me at first, coming from the theatre background, the over-acting world of theatre,” says Webster. “Then transitioning into the film world was very interesting but I quickly found a little bit of success in it. It kind of took off pretty intensely when I was 14 and I was the lead of a YTV/Nickelodeon sitcom. That was the moment, the big break. That (show) was called Life with Boys.”

Both actors would continue their careers mostly in productions directed at child audiences until around the age of 18. At this point in time, in their adolescence, Dowlin and Webster went through a shift in mindset. They were older now, they had new interests. The actors already took their careers seriously, but they wanted the content to reflect that too.

“One thing I did specifically, which was targeted towards adults, was this show I have a recurring role in called, Northern Rescue. It follows Billy Baldwin’s character and his family who rescue people throughout the region they live in,” says Dowlin. “It was just this crazy thing but it was riveting, it was visceral. I think doing work like that in the time that I got to do it made me feel like this (more serious work) is something I really want to continue to do.”

For Webster, it was about taking roles that were completely foreign to her. She recognized the importance of pushing herself out of her comfort zone, as she was afraid of remaining in a “bubble” that would leave her stuck in the world of child comedy acting.

In fact, when she was playing a role of a “party girl” this past summer, which required her to act drunk and run around shirtless, some of the makeup artists that have worked with her since she was 14 couldn’t believe that she was the same “little girl (from) Nickelodeon.”

“So it’s a little bit challenging when you end up in a bubble, where you’ve done very specific roles,” says Webster. “Especially in comedy, because if you’re deemed a (children’s) comedy actor, it’s tough to say, ‘No I can be dramatic as well.’”

There is this stereotype in Hollywood. Young actors are forced to grow up too fast as they are thrust into the harsh business of the entertainment industry and exposed to the dangerous fun that can be had. Neither Dowlin nor Webster fit the mould. Both credit their parents and Ryerson for supporting them and being accommodating when they needed it.

“I was really lucky. I had really strong friends and family around me that kept me so grounded in what I was doing, I didn’t have that bad experience,” says Webster. One of the reasons why she decided to go to university was that she wanted to have that “normalcy” and all the things that go along with the university experience. As a recent graduate, Webster looks back on her time at Ryerson fondly, saying that she is “obsessed with Ryerson.”

“I’m a huge advocate for the school… I  would do recurring roles on shows, I was working with brands on social media, but there was never a moment where I felt like I was getting dragged down by my degree,” says Webster. “I was really able to work and be a part of the industry while also studying and learning about the industry.”

She says that the only instances where she felt like she had to grow up quickly was when she found herself in different corporate boardroom meetings, where she would be surrounded by producers. And because she was underage, her parents would have to spend every day with her, often alternating which days her mother and father would be there.

Dowlin similarly had supportive parents who recognized his abilities at an early age, and set him on a path that best suited his skills. “My parents have been really supportive. My mom and dad, I think their greatest strength is not necessarily knowing what my talents are or knowing where to take them, but recognizing what my interests are,” says  Dowlin. “Recognizing my affinity for public speaking, they were able to say, ‘let’s try him out in theatre for a bit and see if he likes that, let’s put him into acting, dance, and playing instruments… let’s see where his comfortability with people and presenting can lead to.’”

Now in his second year at Ryerson, he’s thankful to be in a community that supports creative people and their pursuits. He says that, so far, his time at university has been “awesome.”

“There’s a lot of support for creative endeavours, whether you’re into dance or you’re into acting, whatever your thing is,” says Dowlin. “I just really love the experience. It also doesn’t feel like you’re going to university – it feels like you are going to summer camp where they hand you books.” 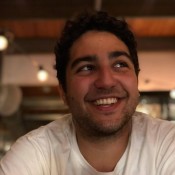 Max Asper is a Toronto journalist and social media editor, with an interest in pop-culture, film, T.V., and music. Outside of journalism, Max works as an artist manager and publicist.

Max Asper is a Toronto journalist and social media editor, with an interest in pop-culture, film, T.V., and music. Outside of journalism, Max works as an artist manager and publicist.

RyersonianTV: This Week for November 7, 2018