Are Ryerson students risking their health by living downtown?

A new study by a team of doctors from Public Health Ontario found living in a metropolitan area with heavy traffic like Toronto, can pose significant health threats — most notably, dementia.

For many Ryerson students, however, living downtown is a necessity. With roots or family far from Toronto, a long or impossible commute can take a physical toll and impact academic productivity.

“We knew from past research that there is pretty good evidence linking how close you live to major traffic to heart and lung disease,” said chief of environmental and occupational health at Public Health Ontario Dr. Ray Copes, who carried out the study along with his associates. “We thought it was quite plausible that it might be linked to chronic neurological diseases.”

In fact, the study, which was published in U.K. medical journal The Lancet, indicated exactly that: Ontarians who live closer to busy roads are more likely to develop dementia than their suburban counterparts.

And the health risks of living in metropolitan areas with high vehicle densities extend beyond dementia. “Motor vehicles, through their engines, emit a lot of air pollution, what’s called particulate air pollution made up of particles and we breathe in those particles,” says professor of occupational and public health at Ryerson University, Thomas Tenkate. 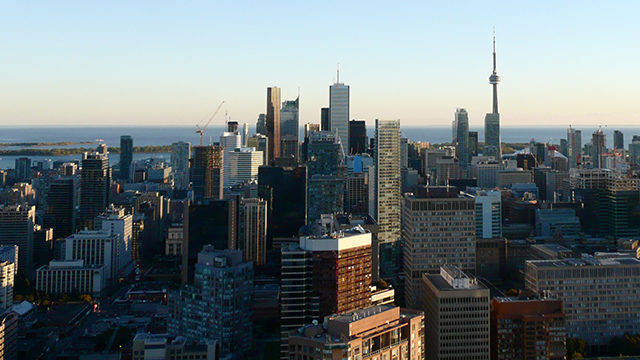 And the range of pollutants experienced by students and residents in the metropolitan area extends beyond the realm of what is identifiable to our senses.

“Things like ultra fine particles we know can be inhaled and can circulate in the body,” said Copes. “But of course noise [pollution] has [also] been linked to outcomes such as increased risk of cardiovascular disease.”

“There’s lots of evidence of health issues associated with breathing problems, like asthma, bronchitis and lung cancer associated with that air pollution,” said Tenkate. He says particles can carry chemicals, which can produce another variety of negative effects on the bloodstream.

And yet, the notions of air pollution and the detrimental neurological or cardiovascular impacts of living downtown aren’t the only concerns for Ryerson students looking for a place to live.

Fourth-year architecture student Alan Guldimann says he experiences excessive light pollution in his Liberty Village apartment every day. “I went from having the calming light of the moon fill my room at night, to the constant fluctuation of lit billboards, street lights, traffic signals and vehicle lights and it definitely made me adjust my internal clock,” he says. “It was really frustrating to be woken up by the sound of garbage trucks and deliveries being made at 5 a.m., not to mention people honking in traffic.”

As an off-campus housing volunteer and a student at Ryerson, Destiny Tucker encountered almost identical circumstances. “In my first two years I lived close to campus and it was pretty brutal because it was so loud all the time,” she says. “Now I live in Chinatown and it is so much nicer and quieter.”

Guldimann faces the same problem. “Sometimes, if I can’t sleep well as a result, I find myself to be much more irritable around coworkers and friends,” he says. “I think the city needs to approach light pollution from an equitable standpoint, and I think that developers need to be more mindful of the light they are producing with their buildings.”

For some, like Tucker, it results in a complete migration from campus. “My sleep schedule got significantly better, so did my stress levels,” she says in regard to moving.  “Although being close to campus is really great, when you’re not in the downtown core I think it makes a huge difference to your overall well-being.”

Tenkate says that, while irritability as a result of lack of sleep is difficult to quantify, effects such as those due to light and sound pollution need to be addressed. However, the solution remains the same: a necessary societal planning and architectural response to ensuring a healthier, more inhabitable environment.

“Taking a look at how we can locate residential areas farther away from heavy traffic than we have in the past and how we can design buildings so that they provide greater protection to occupants indoors from pollutants that arise outdoors are societal type responses,” says Copes. By taking action through public policy to at least attempt to make public living spaces cleaner, Toronto can try to fix a problem residents may not be entirely aware of.

One solution, says Tenkate, would be to create more bicycle lanes and reduce the use of cars throughout the city. “But to do that you’ve got to give people alternatives in regards to getting around,” he said.

Tenkate says that with a more walkable community comes a greater baseline health, “If you can walk to get groceries and walk to the hairdresser, versus having to drive your car everywhere, then you’re building-in physical activity into your daily activity.”

Ryerson University is preparing to open two new residencies in 2018. Both are set to be constructed on or near roads of heavy traffic and at Ryerson, with big lights and loud noises never far away.