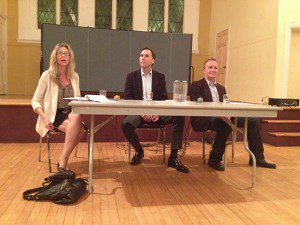 Toronto Centre candidates participated in their first debate of the 2015 campaign Tuesday night, but some of the attendees at the forum were upset that they didn’t get to ask questions of their own.

Amal Kanafani, who said she came to Canada as a refugee from Syria, was not happy she didn’t get a chance to speak.

“For me, I have a lot of questions … they didn’t even let us talk.”

Kanafani said that although she is highly educated, she can’t find employment in Canada. She volunteers “day and night” but is repeatedly told she doesn’t have enough experience for a job here.

Candidates addressed the issue of employment and foreign credentials several times over the course of the 1.5-hour-long debate.

Linda McQuaig emphasized that “foreign credentials are an enormous problem,” lamenting that “we bring the best and brightest, then when they get here, we don’t recognize their credentials.”

Her party, the NDP, has pledged to recognize foreign professionals and to accelerate the recognition of foreign credentials and degrees.

Bill Morneau said that Canada could be doing more to help Syrian refugees and that the Conservatives’ lack of action was unacceptable.

When challenged by McQuaig, who said he hadn’t mentioned the foreign credential issue, Morneau labelled it as a critical issue and said the Liberals would collaborate with provinces to come up with solutions.

For Kanafani, all that talk just didn’t cut it.

“They say something nice but we hope they will do what they speak about,” she said.

Diana Mavunduse, the community development co-ordinator for Dixon Hall Neighbourhood Services, helped organize the debate as part of an effort to get St. James Town residents involved in the upcoming election.

While she was happy with the turnout, Mavunduse said that a lot of residents didn’t show up because they were working, many at precarious jobs. The number one issue for residents is employment, she said.

When asked if it sounded like any of the candidates would help with unemployment and foreign credentials, Mavunduse said, “No, I didn’t hear that.

Mavunduse explained that many foreign professionals believe a “job” means being able to work in their field in Canada, but instead they often end up working menial, low-paying jobs. Mavunduse said it bothers her that qualified professionals from other countries, often trained in the British system, must go back to school, but “when Canadians go to those countries, they’re experts (and) nobody questions their credentials.”

But not everyone in attendance had a problem with the debate. Anish Alex, who works at the Yonge Street Mission, said the debate was great. He felt that candidates answered questions as best they could, given the two-minute limit on answers.

“I think this is a wonderful opportunity for people to participate in the process of democracy,” Alex said.

The debate had a fairly congenial atmosphere, in spite of the mournful organ music that crept in from an unseen part of the church. Morneau responded calmly to McQuaig’s frequent jabs, with Biggin cheerfully joking that the Green party’s role was “to mediate between these two.”

“It’s all too common to bash competitors,” he said.

While each candidate criticized the Conservatives at different times, no one directly mentioned Di Battista’s absence.

Di Battista did not respond to several requests from The Ryersonian for comment. 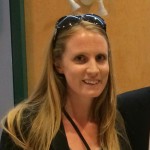