AUDIO: Ryerson performance at the Senate

Twenty-year-old Karis Redwood still remembers having her own solo in the choir at age six.

“Everyone in the room went quiet and they were like ‘she’s so cute,’ but I was so serious about it,” the Ryerson student, who goes by ‘Karis’ on stage, laughed. “If I messed up, I would’ve been so angry.”

Growing up in Jamaica, and having never spent more than two years at the same school, she said music is one thing in her life that remains constant.

Karis describes performing as an addiction she can be proud of. Her dad calls it a natural high.

“It’s a fulfillment of a dream. From when I was really small, it was never ‘I just love music.’ It was always ‘I’m going to be on that stage,’” she said.

Last week, that stage was in Ottawa at Sen. Jim Munson’s annual children’s breakfast. Karis performed an original song to celebrate National Child Day, one that she wrote specifically for Radio Change the World, an initiative by Ryerson’s radio station, CJRU. 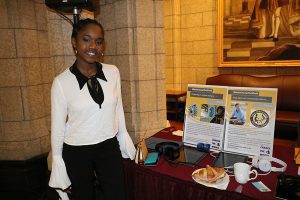 Michelle Song, a coordinator of the initiative, said choosing Karis out of the handful of applicants to compose the featured song was fate. When Karis first wrote the song, she titled it “Change the World,” having no idea the radio’s project was named Radio Change the World.

The song’s lyrics take on the perspective of a child whose voice is not being heard, spreading awareness for children who have died this past year and magnifying the importance of youth voices. She says a song’s impact is much different when you hear words like ‘my’ and ‘I’ rather than ‘you’ and ‘us.’

“It becomes personal. People have to stop and listen to it. Even moving out of my family hearing my music and my friends hearing my music, and being able to perform in Ottawa at Parliament Hill, there’s a difference. You feel how powerful your work can be when people hear you,” Karis said.

This past summer, Karis got a taste of that feeling when she performed at Honey Jam, an all-female talent showcase featuring artists from across the country. She describes it as a landmark in her career, and the first time she didn’t need anyone to validate her as an artist. 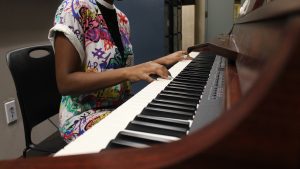 Karis is using the business skills she learned at Ryerson to develop her own brand, building connections within bigger circles. (Photo by Kate Skelly)

“It was the first real professional performance for me, and having it turn out good really propelled me into realizing I can do this and it’s not just something that’s in my head,” she said.

Today, Karis still lives off the natural high of performing. She’s taking a break from her law and business major at Ryerson to focus on her music career, spending time surrounded by other creative minds at Harris Institute, a music school in Toronto.

After getting back from Ottawa, Karis performed an exclusive acoustic version of “Change the World” for the Ryersonian. Take a listen.