Ryerson University’s Faculty of Communication and Design (FCAD) has teamed up with Audible to create more opportunities for students.

Audible announced its official launch in Canada and its partnership with Ryerson on Wednesday morning.

“We’ve earmarked $12 million over the next three years to invest in Canadian writers and Canadian voices,” said Don Katz, founder and CEO of Audible. 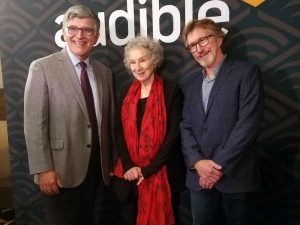 Dean of FCAD Charles Falzon, Author Margaret Atwood, and founder and CEO of Audible Don Katz, at the launch of Audible in Toronto. (Photo by Brendan Dellandrea)

Ryerson University is the only institution that was made part of the launch in Canada. Audible is “committed to investing heavily in the creative industry,” said Charles Falzon, dean of FCAD.

As a result of the partnership, FCAD will be hosting a series of workshops this fall on audiobook production.

Dellandrea added that “the long-term plan is to foster the development of a creative, professional ecosystem for audiobook content development in Canada.”

FCAD students will also benefit economically from this partnership.

Audiobook sales amounted to $2.1 billion in 2016, an increase of 18.2 per cent from 2015, according to the Audio Publishers Association.

While talks are still underway, Falzon said benefits will go directly to the students, and  the partnership could translate into paid internships and production projects funded by Audible.

Dellandrea explained Ryerson has a number of leading schools that are relevant to this production, making it a strong fit for this partnership.

“They’re interested in working with us to develop that talent and to create new opportunities for our students.”

Brooke McGibbon, a first year RTA School of Media student, said the workshops are something she is interested in learning more about, and thinks this partnership will be a great opportunity for students to expand their skillset.

Workshops will be held sometime this fall over a two-day period and they will be open to all Ryerson students.