The ballet community struggles with inclusivity, especially when it comes to ballet attire

The art of ballet has the strength to transport the audience to a different place without the dancer having to say a single word on stage. It’s the one place where ballerinas can express everything and anything while being their most authentic selves. It’s also one of the main reasons why Australian-born ballet dancer Tene Ward loves ballet so much. But when it comes to authenticity, in the eight years of being a ballerina, Ward has become accustomed to wearing the generic pink pointe shoes which are far from her natural skin complexion.

And, in many instances, performing in brown-coloured pointe shoes is still seen as an exception, rather than the norm.

Ward, who identifies as Sri Lankan and African-American, has been doing ballet since she was eight. The first time the dancer started packing a foundation-type substance on her pointe shoes was at 13, when she began training full-time. Ward says dancers who are not the same colour as their attire have to use the “pancake method” to get their pointe shoes to match their skin, which is commonly done for contemporary work.

“It’s a little tedious, it’d be a lot easier if we just got in shoes that were our colour,” says Ward.

Pointe Paint, one of the most popular products used by ballerinas for pancaking, is a water-based pigment that dancers conveniently use to dye and mattify their pointe shoes or canvas ballet slippers. According to Pointe People’s website, the main reason why it was created was so dancers wouldn’t “feel inferior because of the colour of their skin, the shape of their body or their economic background — ever.”

Since classical ballet stresses uniformity, as a member of the Corps de Ballet for the National Ballet of Canada, Ward is expected to blend in with the group.

Increasingly, however, dancers of colour are questioning this allegiance to tradition and asking why their brown attire can’t be part of the Corps.

“The ideal in ballet is that your foot is an extension of your leg, it’s supposed to look like it’s all the same colour,” says Nishi Bassi, manager of exhibitions and assistant curator at the Bata Shoe Museum. “Women of colour have traditionally not been able to achieve that ideal because ballet was not made with them in mind.”

When pointe shoes were invented in the early 1800s, they were originally white to help dancers appear ghostly — the romantic ideal was for women to be ethereal — and pink came to dominate as a way to approximate European dancers’ flesh, reported the New York Times. The Times also added that the shoes should be able to blend in with the leg and not “break the line.”

Ward says when you speak to anyone who watches ballet, such as a donor, they emphasize tradition. “When they watch a classical ballet performance like Swan Lake they say, ‘oh, it’s so beautiful when they all look the same’ — it’s like, OK…but we’re not all the same.”

Since Ward’s golden complexion undeniably stands out in her pink shoes and tights, her lines continue to appear broken.

So why are dancers of colour prohibited from wearing brown-coloured pointe shoes during a classical performance?

Nicholas Rose, Corps de Ballet member of the National Ballet of Canada, says that “people are so concerned about what a ballerina should look like [that] they’re not even paying attention to what the ballerina is doing on stage.”

The second-generation Bahamian says that most of his black female ballet friends have been affected by the strict colour rules that govern classical ballet in particular.

“Every single one of them has told me at some point they have gone through colourism dysphoria because they have to walk in the room and put on those pink tights knowing that is not what is underneath those tights…it bothers them to the core,” says the 22-year-old dancer.

Rose stresses that having attire that matches your skin tone doesn’t have to only be for black and brown dancers. “There was a white girl in my [old] company that wore tights that were closer to her skin tone and it looked amazing…that’s the way it has to go, that’s the way it’s going to go.”

Dawn Quinn, the manager of The Shoe Room on Jarvis Street, agrees. “There’s definitely room for growth, but I think we’re on a good start. Ballet tends to be a slow progression because a lot of people are stuck in ‘tradition,’” says Quinn. The Shoe Room’s motto, which offers up to 8,000 specialty pointe shoes, states that they “understand the importance of fit and function without sacrificing style.”

Quinn recognizes that there’s a growing market for pointe shoes in a diverse range of shades. She orders speciality pointe shoes from Freed of London, a brand that recently created a line of ballet shoes specifically for dancers of colour. As of now, brown pointe shoes are available for custom order at her store; however, she says she’s looking to increase her stock so there’s access to them without a wait.

Ward says that although the National Ballet of Canada is probably the most diverse it’s ever been right now, the ballet community still has a long way to go when it comes to diversity and inclusion.

“Seeing how diverse other art forms are becoming and how much people are trying to include more people of colour, I would think that we [the ballet community] should progress faster.” 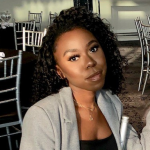