Being a woman in politics 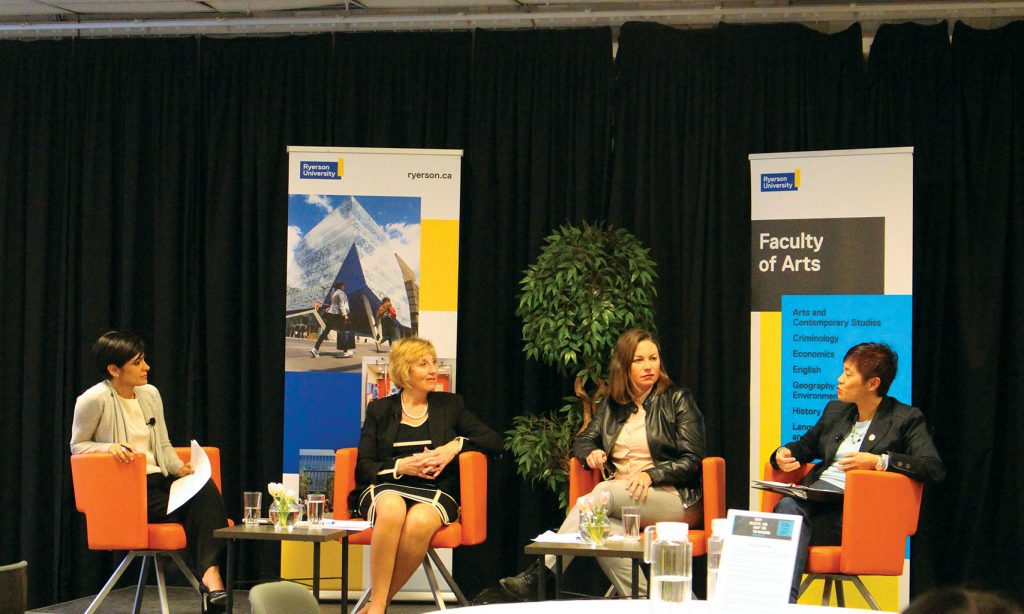 #Metoo and Time’s Up have made their mark on Hollywood, but these movements are also bringing change for women in Canadian politics.

On Monday, three female politicians discussed the challenges of being a woman in politics at the “Why Elections Matter to Women” panel at Ryerson University.

Due to the effects of these campaigns, Kitchener-Waterloo MPP Catherine Fife says she was recently able to rebuke a male colleague after he criticized a woman’s appearance on TV. She says she never would have done something like this two years ago.

“(It) always surprises me that legislators need a code of conduct to remember that they shouldn’t be saying sexist and misogynistic things or (making) racist or discriminatory comment,” Fife said.

During her first run for office in 2007, Fife was forced to focus on her appearance She was given a clothing allowance and her hair expenses were covered.

“If I show up looking like I just rolled out of bed, people would talk about it, whereas they don’t talk about it with men,” she said.

With initiatives like #MeToo and Time’s Up however, Fife says we’re amid a cultural shift: men are being held accountable for their actions and safe spaces for women are on the rise.

“When I first came to the ONtario legislature, I was genuinely shocked at some of the conduct,” she said. “You’re dealing with a workplace where there is a lot of networking – networking is what we do – there are receptions all the time, there is alcohol, there are power imbalances that exist.”

In Ontario, only 36 per cent of MPPs are women. Equal Voice, a multi-partisan organization dedicated to electing more women in Canada, estimates that it will take 90 years before the legislature can achieve gender parity in the House of Commons.

Ryerson PhD candidate Bhutila Karpoche is the NDP candidate for the Parkdale-High Park riding. Karpoche has been campaigning for the upcoming June 7 provincial election, which she says has left her little time to spend with her husband and three-year-old daughter.

“It’s a lot of hard work and you’re out there campaigning long hours,” Karpoche said.

Karpoche’s experience is shared by women politicians across the board. If she is elected for the upcoming term, she will join the MPP “sisterhood.”

“The most valuable part of having a sisterhood is there is a camaraderie,” Fife said. “Regardless of what party we’re from, we have this shared experience of working as MPPs.”

Still, women are often reluctant to run for political positions.

“So what happens after they leave post-secondary, or leave high school? They stop,” Wong said.

Karpoche’s advice for young women who want to pursue a political career: go for it.

“You always feel like you need to have all these qualifications and experience before running, but guess what? You don’t,” Karoche said. “All you need to be is 18 years old and a Canadian citizen.”

OPINION: The major downside of working a desk job