Behind the camera with Cheryl Thompson, Shonna Foster and Ayat Salih

The late great Toni Morrison once said, “If you find a book you really want to read but it hasn’t been written yet, then you must write it.”

Black writers and filmmakers face a similar reality, according to Cheryl Thompson, assistant professor in the creative industries program at Ryerson.

To close Black History Month, The Catalyst at the Faculty of Communication and Design (FCAD) organized Black in Motion: Behind the Camera, a virtual event discussing the realities Black women face in film. The event featured directors Shonna Foster and Ayat Salih.

After collaborating with Foster on a Gold Series campaign, Thompson, the moderator of the event, decided to bring her on as a panellist to share her cinematic journey.

Foster’s journey to becoming a filmmaker was a multifaceted, windy road, she said. Despite being a director today, Foster’s journey began in front of the camera as a child actress. When Foster was eight, she starred in “Gone A Foreign,” a short film directed by Annmarie Morais.

“At that point I had never seen a Black woman directing, nor had I been on a set that was diverse. I really credit that experience to knowing this is something I can do,” said Foster.

Further inspired by her family’s love for cinema and foreign films, Foster went on to receive a BFA honours degree in theatre from York University. Foster is now an award-winning director, producer and storyteller as well as a film and TV consultant.

Like Foster, Sudanese artist Salih came from a film-loving family. Her mother once told her that she was her last love, but film was her first.

As a director and media production student at Ryerson, Salih said fulfilling her directorial dreams is a “full circle moment”  that just made sense.

“I see the world in movie scenes anyway so I might as well strive to have a career that accommodates my perspective,” Salih said. “There are moments where words or sounds fall short and in film I feel like I can truly express what’s happening in my mind.”

Despite being at two different stages in their successful careers, Foster and Salih both noted that the paths to getting where they are comes with challenges.

Hashtags like #OscarsSoWhite, created by April Reign in 2015, drew attention to issues of representation and inclusion plaguing the industry.

Foster said that although the industry seems to be doing a better job at diversifying who is in front of the camera, it’s still very much struggling to do that work behind the scenes where it is still “dominated by whiteness.”

The same issues of race have trickled down to classrooms, and also pose a problem for film students like Salih. Imposter syndrome and a lack of confidence are two of many struggles Black creatives cope with as they are often the only Black people in the room, said Salih.

“You spend so much energy and time in class being the Black student and the Black advocate,” she said. “The theoretical education we’re supposed to receive does not apply to me, my history, my aesthetics or my culture.”

Salih told Thompson that she was one of only two Black professors she has had. As a Sudanese creator, Salih also said she feels pressure to be a trailblazer of sorts.

“There’s a lack of cinema culture that I can look to as a Sudanese person because Sudan was robbed of its cinema culture by colonialism and dictatorship.”

To this, Thompson said pioneers are to be celebrated — and out of the misfortune, greatness is often born.

Looking to a brighter future, both Foster and Salih have exciting projects in the works. Foster is currently working on a short film with a student mentee entitled “What If We Are Not Okay and What If I Am Not Sorry?” with two pilot series in development and a feature film also on the way.

Last fall, Salih made her directorial debut with Purple Matter. The film follows a young Black and queer woman confronting the grief of her deceased mother and the blossoming of a new relationship — all explored through dreams.

Purple Matter navigates the specific reality of a Black queer immigrant woman and what coming out, a concept she said is foreign to many queer folk beyond the Western world, looks like for her.

As for the future of Black women in the film industry as a whole, Thompson predicts a bit of a “renaissance.”

Through important work being done by organizations such as The Black Screen Office, BIPOC TV and Film, as well as Hire BIPOC, Foster said the industry is still getting there — but something is brewing. 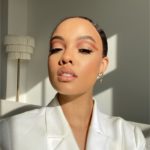 Lauren Knowles is an audience engagement producer and writer for the Ryersonian's Winter 2021 Masthead. Lauren is also a fourth-year journalism and fashion student passionate about writing purposeful pieces.

Lauren Knowles is an audience engagement producer and writer for the Ryersonian's Winter 2021 Masthead. Lauren is also a fourth-year journalism and fashion student passionate about writing purposeful pieces.

From the frontlines: a look into the lives of health-care workers a year into the pandemic