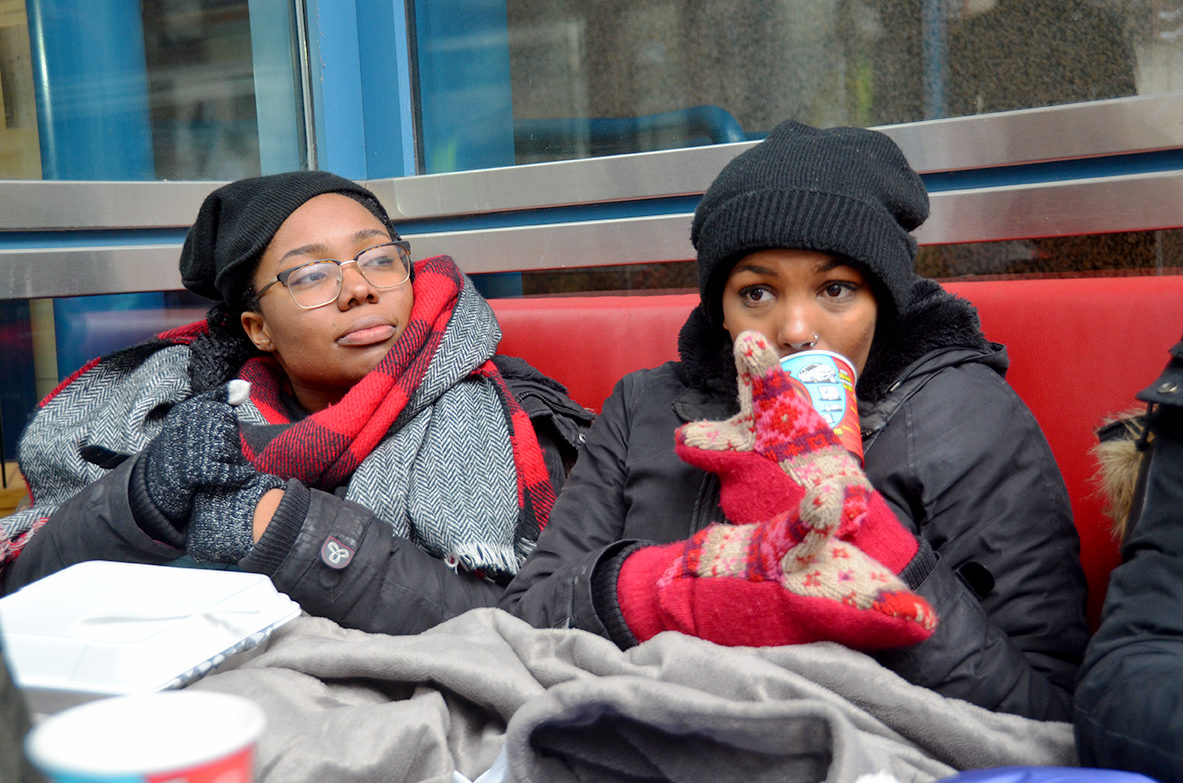 Tuesday marked the tenth day that Black Lives Matter – Toronto (BLMTO) was camped outside the Toronto police headquarters in what they’ve dubbed “#BLMTOTentCity,” demanding charges be laid against the police officer who fatally shot a black man last summer.

BLMTO has released a list of demands, including that the Ontario Special Investigations Unit (SIU) release the name of the officer who shot Andrew Loku and lay charges against him. They also demand a coroner’s inquest into Loku’s death, an overhaul of the SIU and a “full elimination of carding.”

Kristyn Wong-Tam, Toronto city councillor for Ward 27 (the ward that Ryerson is in) released a statement March 24 offering to facilitate a meeting with BLMTO organizers, city councillors, police chief Mark Saunders and members of the Toronto Police Services (TPS) board for “an honest conversation at city hall on how Toronto polices its citizens and how we can do better to save lives.”

“Their conclusion was that officers were justified in what they were doing,” -Mark Pugash

On March 29, Wong-Tam and fellow councillors Mike Layton and Gord Perks filed a motion to Toronto city council to ask the provincial government to conduct an “anti-racism” review of TPS and the SIU.

These are two successes that have come out of Toronto’s ongoing BLMTO movement, which Ryerson students and student groups have been heavily involved in.

The demonstration began March 20, when around 100 protesters gathered at Nathan Phillips Square. They were demonstrating after the SIU announced earlier that week that it would not press charges against the unnamed officer who shot Loku, 45, in his west Toronto apartment building in July 2015.

Loku, a black man, was shot and killed after police say he refused to drop a hammer he was holding.

Mark Pugash, TPS’s director of corporate communications, stressed to The Ryersonian that the Toronto police were not responsible for investigating Loku’s case.

“It was investigated by a fully independent, arms-length body (the SIU). They looked into the evidence and they have a responsibility under the law of this province to investigate such incidents,” he said. “Their conclusion was that officers were justified in what they were doing.”

Organizers of the March 20 rally announced their intentions to pitch tents in Nathan Phillips Square and stay there all night. Shortly after, Toronto police allegedly threatened to charge the protesters with trespassing.

Protesters relocated early Monday morning, taking their tent city to the front of the Toronto police headquarters on College Street, where they have since remained.

Monday evening, the protest turned violent when demonstrators clashed with police. Police and the fire department entered the tent city to remove the tents and extinguish the firepit that protesters had set up. Some protesters said they were pushed and shoved by police.

“I literally thought my insides were going to come out,” -Yasmin Mumed

Pugash told The Ryersonian that police used “minimum force to move people” after asking protesters to remove their tents and firepits.

But Yasmin Mumed, a University of Guelph student and protester, disagreed.

Mumed said that the police “roughed us up a lot and pushed us really hard to the ground.

“I literally thought my insides were going to come out. Ever since then, I haven’t been able to eat properly or digest my food properly.”

Still, Mumed said that she does not want to leave the tent city.

“In terms of what’s feeding me, what I need is here. Just the love and the spirit, what is in this space right now,” she said on Thursday.

“Our community is tighter than it was before and we’re more united than we’ve ever been. We’re mourning black lives. We have nothing to lose at this point.”

Mansoor Tanweer, a second-year Ryerson journalism student who was also present at the tent city on March 21, agreed that the community’s resilience seemed stronger than ever.

Tanweer arrived after the TPS and fire department had entered tent city to extinguish the firepit. He said that the situation had calmed.

“When I arrived, the atmosphere was really communal,” he said. “Everyone was really calm. They weren’t rioting or anything, it was more like, well, Bob Marley was playing.

“It seemed like everyone knew in the back of their minds that it could be shut down at any time, but nobody was letting that affect the mood.” 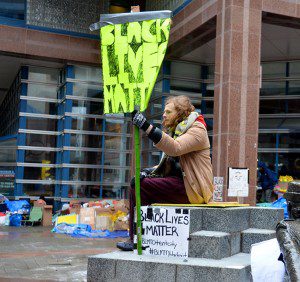 Despite freezing temperatures, protesters stayed at the tent city throughout the week.

A March 24 rally at police headquarters ignited further energy for the cause as hundreds of people showed up.

The rally began at 4 p.m. and continued into the night. It closed off part of College Street and turned into a street party with musical performances later that night.

Jean Montaque, a black Toronto mother and nurse, and her lawyer, Saron Gebresellassi, held a press conference at the rally about Montaque’s lawsuit against the Toronto police, in which she claims that she was illegally detained and her home illegally searched in 2013.

Pugash said that the lawsuit had already been served to Toronto police on Feb. 11.

Gebresellassi said that the March 24 press conference was “symbolic.”

“This happens in the GTA often, and it’s rare that a family can actually hire a lawyer and sue, but this family was able to do that,” Gebresellassi said at the rally.

“This sends a message to police officers across Toronto that Toronto Police Service (is) acting with such a great level of disrespect and impunity towards the people of Toronto and against black families.”

Yusra Khogali, a BLMTO co-founder who also spoke during the rally, reiterated this thought.

“The ways in which the police inflicted violence on this family and this woman (are) the same ways they have been inflicting violence on us. This is an everyday lived experience of being black in this city,” Khogali said.

“The Toronto Police Services are anti-black. And this is a real situation.”

Members from each of the groups were also present at the rally.

“This isn’t anything new,” said Pascale Diverlus, a BLMTO co-founder and a Ryerson student.

“Our lives being this uncomfortable, this moment being so uncomfortable is not something that’s new to us,” she said.

Diverlus noted that BLMTO has succeeded in sparking conversation about being black in Toronto.

“Realistically, it’s a global problem. You need to talk about it, and it’s amazing to see that folks are not only standing in solidarity with us, but raising the issue in their own city as well,” she said.

“The support of the community has really been what’s driving us. People have been so giving.”

“It just reaffirms what we know already — that what we are doing is right,” Diverlus said of the donations.

As for any kind of timeline, Diverlus insisted that the community will decide just how long the tent city should live on.

“Black Lives Matter is here to stay,” Khogali agreed. “We are going nowhere.”