Jennifer Shahade, chess champion, poker star and author of Chess Bitch, was blindfolded and tortured by the sound of jackhammers at Ryerson on Friday. All the while, a computer algorithm translated her chess moves into poetry.

Shahade, in Toronto for a poker tournament, stopped by campus to face off against Ryerson English instructor and chess enthusiast Aaron Tucker, one of the developers of the ChessBard algorithm. For each space a player moves to, the program selects a word from 12 source poems Tucker wrote. The result is two unpredictable, and often surreal, poetic compositions. 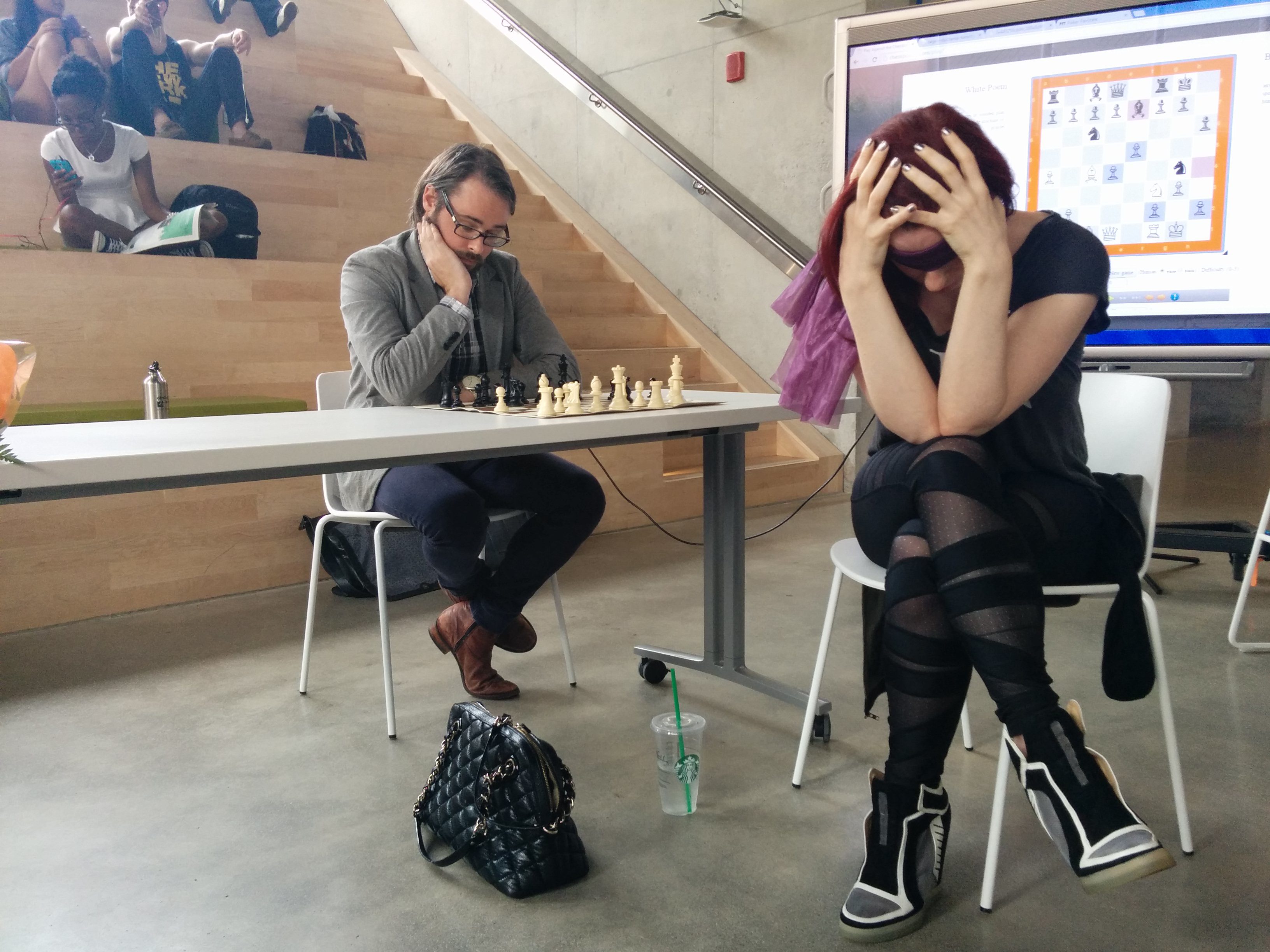 Jennifer Shahade tries to block out the throbbing sound of a jackhammer at the SLC.

“I’ve always written poetry,” Tucker told The Ryersonian. “I started seeing the language and the precision required in (chess) being mirrored in how I write my own poems and the minor programming and web design background that I have I sort of conflated those three realms together.”

A two-time American women’s chess champion and Woman Grand Master, Shahade agreed to help compose some digital poetry by playing her first public blindfolded match in the atrium of the Student Learning Centre (SLC). Her blindfold gave Carter, who’s been playing for just over four years, a fighting chance against the chess powerhouse.

“When you play a blindfolded exhibition you have to focus so much,” Shahade said. “You just have to do your very best to picture the chessboard in your head, and that’s a massive concentration. It’s akin to meditation.”

But just as the pair began to make their first moves, Shahade’s meditation was interrupted by the pounding sound of a Bobcat jackhammer plowing into the concrete of the newly constructed SLC building. The noise went on for 20 minutes, prompting Shahade to wrap her hands around her head in a futile attempt to block out the noise.

“Got to make the best of this,” she said afterwards. “It’s going to be a funny story later.”

See our video report, by Kascha Cassaday and Arthur White:

Playing from memory, Shahade stayed a step ahead of Tucker throughout the game, even stopping to correct one move he called out. But another miscommunication led to confusion, as the mental board in Shahade’s head no longer matched the one that Tucker and the crowd were looking at. The game was called off and Shahade, who had more pieces left than her opponent, was declared the winner.

Shahade, whose brother and father are both professional chess players, has always been interested in the parallels between art and chess. Like Tucker, she’s influenced by the work of Marcel Duchamp, a French artist known for his fondness for chess. Tucker’s program has translated some of Duchamp’s games into poetry, while Shahade has re-enacted one of his most famous matches, something she calls “naked chess.”

“It’s a reversal of Marcel Duchamp’s iconic match against a naked woman,” she explained, after showing a picture of her naked match to the crowd. “But in this case I was clothed and he was naked.”

That’s only one way Shahade has inverted traditional gender roles in the chess world, a realm long dominated by men.

Keeping her clothes on is only one way Shahade has tried to give women the upper hand in professional chess, a world long dominated by men. Her first book, Chess Bitch, was followed by Play Like a Girl, her attempt to reclaim a phrase that’s been used to deride women in chess.

“People mean it to say you don’t play aggressively enough,” she said, “so I just wanted to give this book to young girls all over the world who are trying to become chess champions and show that playing like a girl is a good thing and all the tactic in the book are subject-noun agreement checkmates and combinations by female chess champions.”

After the blindfolded game ended, Tucker read out the poems that ChessBard had churned out. Shahade’s went as follows:

toward necessity beside machine or

active temptation or that grain

any wink the diagonal ownership

each ownership, the slug, intuition

Tucker was particularly pleased with the last stanza of the poem from his side of the game, noting the contrast between the term “pastoral” and the digital nature of the ChessBard algorithm.

“I think they’re actually two of the better poems that have come out of this project,” he said.