BREAKING NEWS
Ryerson science departments give medical supplies to Toronto hospitals fighting COVID-19
Toronto’s global climate strike moves online
A diary: what it was like leaving residence due to COVID-19
How to study at home for exams
Student groups are taking out the social from social distancing
NewsScience & Technology

Twenty-three per cent of Canadian youth reported sustaining a head injury in 2015, Statistics Canada found. Between Canada and the United States, a company report stated, more than four million people suffer from mTBIs.

For people recovering from mTBIs, common Liquid Crystal Display (LCD) or Light-Emitting Diode (LED) screens can cause headaches. During their recovery, doctors recommend mTBI patients not use phones, computers or much else with light-emitting screens. This keeps many mTBI patients from working productively at school or at their jobs. It also cuts them off from a lot of social contact. 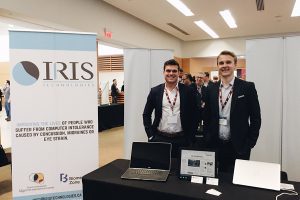 “When you injure your ankle, you need to immediately rest it and then reintroduce activity gradually,” said Dr. Andrew Baker, a researcher in the Keenan Research Centre at St. Michael’s Hospital. “You don’t go back to marathon running the same week. Similarly, the equivalent to walking and running for the brain is cognitive load.”

The brain relaxes if the scene is constant but, every time it changes, the cognitive load increases because the brain is vigilant and must process the new information, Baker said.  The refresh rate of an LCD screen can overwhelm a concussed brain. This is especially true of LCD screens whose refresh rates hovers around 60Hz. “It was thought that this was just faster than the refresh rate of the retinal neurons,” Baker said. That leaves injured brain cells struggling to keep up.

Back in 2014, the American Academy of Pediatrics studied the length of time physical symptoms continued in patients with mTBIs. Light sensitivity is defined by the University Health Network as “an abnormal sensitivity to light,” which keeps people off phones, computers and other devices with backlit screens. UHN said “the majority of screens on computers, televisions, phones and other technology are liquid crystal displays (LCD) using a backlight or reflector to produce light in colour. For someone suffering from photophobia, the backlight is aggravating as well as the ‘flicker rate’ of an LCD screen which refreshes approximately 60 times per second.”

The American Academy of Pediatrics found light sensitivity remained a problem for the patients studied for a median of about two weeks (13 days) but, for some, it stretched on for 90 days.

Iris developers Colin Harding and Connor Ross both knew family and friends who suffered from concussions and the resulting light sensitivity, and knew the impact it had on them. Their project, Iris, allows people with concussions to get back to using screens sooner.

Iris uses an e-paper display instead of an LED or LCD display. With e-paper, magnetized polymer creates shapes that move across the screen. There’s no flashing light and no refreshing.

E-paper isn’t entirely new technology. Kindles and Kobos use it to mimic paper without emitting light, but they’re mostly limited to reading documents and can’t be manipulated. Iris, however, can be plugged into a computer and used like any other monitor.

Harding and Ross joined the BMZ just over a year ago after they built an early model at Queen’s University. But they lacked funds, clinical validation and guidance. Harding said that has since changed. Now, “Iris Technologies is an investor-backed Canadian healthcare company with a clinically validated and patent-pending product.”

Since joining the BMZ, startup services manager, Ran Manor said Iris has made a “significant pivot.”

Manor said the BMZ encouraged Iris to modify a third-party-made screen to save time and money. “It’s one thing to get a prototype, it’s another to get a market-ready product,” he said. “If you can find a shortcut, you might as well take it. They found one which, with a few tweaks, matched their criteria. They made it their own screen.”

“The goal was to have 50 participants, but the response was so overwhelmingly positive that the principal investigator, who’s a concussion expert for all of North America, cut the study short,” Dreger-Smylie said. “He didn’t feel the need to continue it because every patient that trialed the device, compared to a typical LCD or LED screen, experienced fewer symptoms, a decreased severity of symptoms and the duration of symptoms they experienced was significantly less.”

Manor said Iris is distributing trial-run models to schools and individual users soon, before expanding its distribution, under BMZ direction. He said he expects Iris to remain with the zone for at least another three months.

“The Biomedical Zone has been invaluable,” Harding said.“Almost every week, the BMZ team informs us about a new opportunity.”