Dunham is the creator and star of the HBO series Girls, which first aired in 2012. As the title character Hannah Horvath on Girls, she is known for her nude scenes and outspoken attitude.

Not That Kind Of Girl, is currently ranked no. one on the New York Times Best Sellers in Humour. On the inside front cover, her book promises to be “a hilarious, wise, and fiercely candid collection of personal essays.” It aims to be a reassuring life story from an honest young woman. After a few pages, however, it quickly turns into a self-absorbed yet entertaining read.

Dunham’s memoir depends on oversharing personal details in order to craft her journey through life. Every crush or memory of teenage angst is shared throughout the 262 pages. As it’s not a chronological memoir, Dunham can be a curious child  in one paragraph and a moody teenager in the next. The book also places little emphasis on her writing, creative process or success at a young age.

Surprisingly, there is a common theme of isolation and desperation, which jumps out at the reader. Twelve-year-old Dunham was “devastated” when her friend Natalie no longer wanted to have sleepovers. As a young girl, appointments with her therapist helped her cope with anxiety. Later in life, a 24-year-old Dunham wears lacy underwear and begs a suitor to “please, finally have sex with me.”

Though devastation and isolation exist in Dunham’s life, privilege prevails. As the daughter of two well-known artists, Dunham has enjoyed the pleasures of privilege and a wealthy upbringing.

On page 83, she describes being featured in The New York Times as a teen. “When I was 17 years old I even had a vegan dinner party that was chronicled in the style section of The New York Times — headline: ‘A Crunchy Menu For a Youthful Crowd!” At moments like these, all traces of the theme of awkward youth disappear from the book.

When the young Dunham steps out in Dior owned by her grandmother and shares her views on leather and animal rights with the newspaper, it becomes obvious that her coming-of-age story is one of wealth and opportunity. When she suddenly leaves her restaurant job after college, it becomes an affirmed fact.

At Ryerson University, Dunham has support on campus for both her honesty and her work. Third-year radio and television arts student, Caroline Rolf, is a fan of Girls and has watched the show since it first aired. 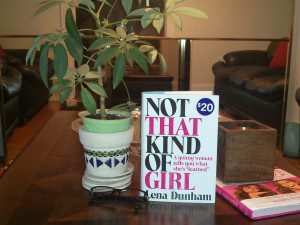 The cover of Lena Dunham’s memoir, Not That Kind of Girl (Fatima Syed / Ryersonian Staff)

“Sometimes, I laugh at it out of discomfort or pity for the characters, not because anyone’s cracking jokes. Yet, in all its uncomfortable and confusing moments, I return again next week,” said Rolf.

The 21-year-old says that she identifies with Dunham because of her age and demographic. As an aspiring writer and RTA student, she also admires Dunham’s professional achievements.

Rolf does not have an issue with Dunham’s on-screen nudity either. In fact, she appreciates the “raw quality” of this aspect of the show.

“Women don’t have sex with their bras on, that’s like the second thing to come off. If a camera were in my apartment – guess how I look getting out of the shower? Very much like Hannah.”

While Dunham’s memoir may be a story of privilege, it is also an unusual and captivating read which has its moments of humour. Not That Kind of Girl is laced with amusing thoughts and offers a behind-the-scenes glimpse of a charmed life. 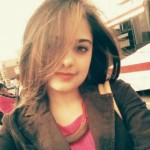