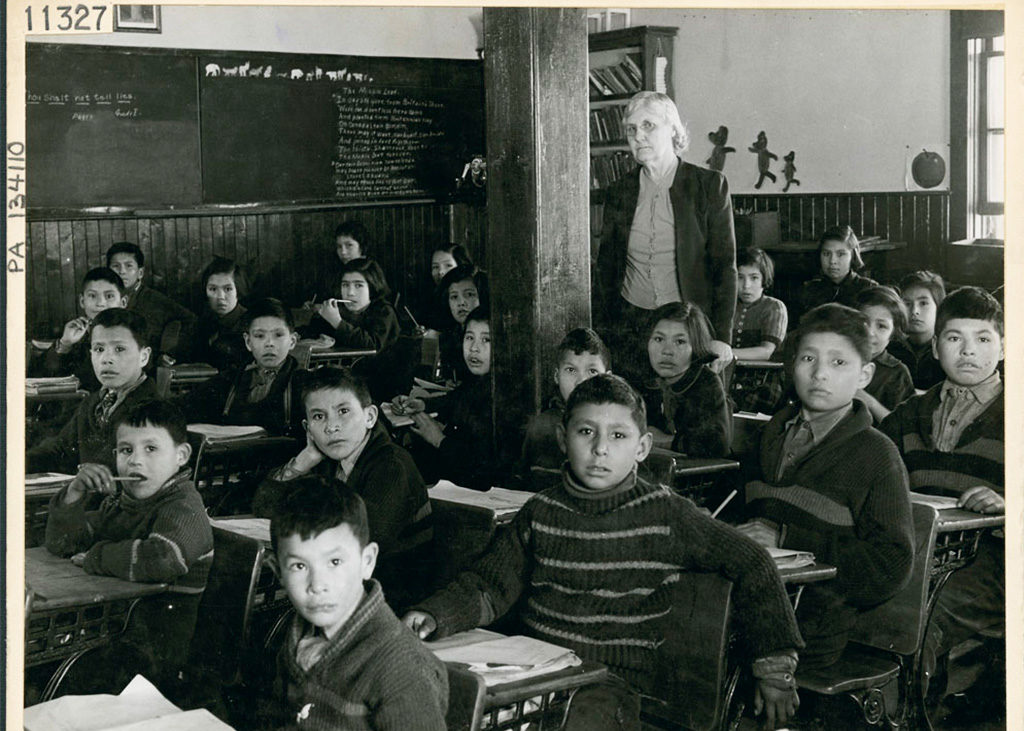 (Courtesy of Bud Glunz via Library And Archives Canada)

If you’re an indigenous person new to an urban campus it might be hard to see yourself represented among the floods of fashion forward students on Gould Street.

“It is really hard for Indigenous students to come to an urban place and try and fit in,” said  Riley Kucheran, a graduate student in the communication and culture program at Ryerson and member of the Pic River First Nation.

Kucheran has been working with Ben Barry, associate professor of equity, diversity, and inclusion, at the fashion school, to incorporate indigenous curricula into his mandatory first-year course, fashion concepts and theory.

“Fashion is obviously a field that perpetuates colonialism against Canadian indigenous people,” said Barry. “But fashion also has the power to shift the current dynamic and to change colonialism and change appropriation.”

“Clothing was used as a weapon in residential schools to take the identity of the children who attending it,” said Kucherena, who has been researching this topic for the course.

Residential schools would strip children of of their traditional clothing and throw them in the garbage or burn them. Children were forced to wear western style school uniforms, according to What We Have Learned, Principles of Truth and Reconciliation.

The experience of indigenous students in fashion courses, and the role clothing played in residential schools, will be part of a 50-minute lecture given by Kucheran in the course. The rest of the three-hour class will be a panel discussion with indigenous fashion experts, followed by a networking event that will give students a chance to mingle and ask questions.

The courses is still being researched and the panelists are still being decided. But, according to Kucheran,  Sage Paul, who created the Setsune indigenous fashion incubator, may be one of them.

The Aboriginal education council at Ryerson gives money to faculty who want to incorporate indigenous history and culture into their course material. This is also one of the recommendations put forward by the Truth and Reconciliation Commission last year.

When Barry went to the council at Ryerson to make this part of his curriculum, Kucheran volunteered to do the research.

“In spearheading this curriculum, this is why I am working with Riley”, said Barry. “Obviously as an Indigenous student, these are issues he has a perspective on that I do not.”

Both Barry and Kucheran have been working to gather as many different perspectives as possible in assembling material for this curriculum. Kucheran stresses the importance of listening to indigenous elders when he was conducting his research.

“I think it is important that there is power sharing, and that faculty members step back when dealing with issues of identity, that is not their own identity or area of expertise, and support others to really take the platform and provide a pathway for them to champion these issues,” said Barry, who is not indigenous himself.

In a biographical documentary series about the creation of the magazine, Charleyboy talks about attending Ryerson as a fashion student and incorporating a Salish design into a hat she made for a project. She was told by her professor “that isn’t fashion.”

“I think, just now, we are starting to see indigenous content being created,” said Kucheran, “If you don’t see yourself in courses and in any other way, you are not as likely to engage in that culture.”

The course is scheduled to launch on Feb. 1 and will be open to students who are not enrolled.

The lecture will focus on how indigenous culture has been misused in the fashion industry and how students can change this power dynamic.

“Really the goal of this class is to foster the next generation of agents of change,” said Barry.