She never thought her gender would be an issue during her tryout for the Ryerson Rams baseball team, but being the only woman on the field brought Brittany Chan some unexpected attention.

After all the questions were answered and cameras were put away, the Ryerson Rams began their inaugural season with a 5-3 victory over the University of Guelph Gryphons on Saturday.

Chan, a second-year hospitality and tourism student, wasn’t in the lineup. She didn’t survive the final round of cuts over the summer.

During the summer tryouts, Chan pitched two innings. She says she believes it was her shaky first inning that sealed her fate. Her inability to find the strike zone was something out of the ordinary for her because she prides herself on throwing the ball accurately across the plate.

She received an email while she was getting ready for work one day that broke the bad news. For the first time in her life, she hadn’t made the cut.

“I don’t mean to be cocky or anything, but it’s just never happened. I just didn’t know how to deal with it at first,” she says.

Chan says although she was upset about not making the team, she also felt relieved.

“It was all over. All the stress, all the people asking me questions and giving me all this attention that I didn’t want,” she says.

People kept asking questions about trying out for a sports team dominated by male players.

“To me, it’s not about (being the only woman on) the men’s baseball team,” she says. “It’s not a big deal to me because it’s what I do all the time. That’s what stressed me out because I didn’t want to make it a big deal.”

Ben Rich, the Rams’ head coach, did his best to ensure the judgment process was no different with Chan than any of the other players.

“It’s not about her being male or female. It’s about putting together the best team possible,” he says. “If a female can compete at that level, all the power to her. I’m not about restricting anyone from putting forward their best effort.”

Rich says Chan was pretty close to making the team.

“She has virtually flawless mechanics on the mound and she commands the ball pretty well. But ultimately, it came down to a couple pitchers that were ahead of her in terms of velocity, sharper movements on their curveballs and secondary pitches.”

The CBC was one major news outlet to report on Chan’s experience. Even though the coverage didn’t help her cope with the common stresses that come with trying out for a sports team, she believes it helped educate people about the basic aspects of determination and highlighted the various avenues women can take if they are seriously contemplating playing competitive women’s hardball.

Although she didn’t make the team, Chan has a competitive future ahead of her. She is heading to British Columbia next July to participate in a Canadian National Invitational Tournament where women’s national team manager André Lachance will select the women he will take to Japan for the 2014 Women’s Baseball World Cup.

Chan says if she makes the team, would be unsure of trying out for Ryerson’s baseball team again next fall. It all depends on how much she has recovered after her time away.

“You can turn a step back into a comeback in a way. Take it as a learning thing,” she says. “Learn from what you failed at and use it as motivation if anything to become better.” 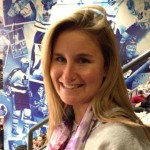 Originally from the West Indies, Hayley loves everything to do with sports. Equestrian turned journalism student, she needs to know what is happening on the court, the field and of course the racetrack.

Given that Secretariat is her favourite athlete, she hopes to someday witness a Triple Crown unfold. This difficult feat hasn't been accomplished since Affirmed won the Kentucky Derby, Preakness Stakes and Belmont Stakes in 1978.

For this reason, Hayley continues to wait for the next big sports story to spring forth from the gates.

Masters Student. Sports Lover. Fitness Fanatic. Originally from the West Indies, Hayley loves everything to do with sports. Equestrian turned journalism student, she needs to know what is happening on the court, the field and of course the racetrack. Given that Secretariat is her favourite athlete, she hopes to someday witness a Triple Crown unfold. This difficult feat hasn't been accomplished since Affirmed won the Kentucky Derby, Preakness Stakes and Belmont Stakes in 1978. For this reason, Hayley continues to wait for the next big sports story to spring forth from the gates.

Skating into the season with a new strategy