BREAKING NEWS
Why I, a student journalist, stopped reading the news
From the frontlines: a look into the lives of health-care workers a year...
Non-profit organization helps students find jobs in their field during the pandemic
Ryerson rolls out winter food relief program
Ryerson honours outstanding pandemic efforts
Features

Money-related stress is common among students, but there are ways to save.  Josh Kolm / Ryersonian Staff

“Money is always going to be an issue,” says Eric Zaworski, a fourth-year Ryerson student who has learned about the value of money the old-fashioned way.

This past summer, Zaworski held down three jobs: running the gamut from valet parking at a high-end steakhouse to working at Ryerson’s own Digital Media Zone. He says he’s had worse jobs and been less financially stable. Although he’s taken out OSAP for the first time this year, he has a reasonable and relatively optimistic outlook on his situation for the upcoming school year.

“I may be in debt now, but I’m 23,” he says. “I have no mouths to feed and I’m not financially responsible for anyone else but myself.”

But covering his personal expenses isn’t an insignificant cost. He receives help with half of his tuition, but covers the rest of it in addition to rent, books, transportation, internet, food and a cell phone bill. Put simply, all of his living expenses.

As for his social life?

A 2010 survey released by TD Canada Trust found that 21 per cent of Canadian students were stressed about their finances, while another 36 per cent said that they felt anxious. Yet tuition fees are still on the rise. According to a recent report by the Canadian Centre for Policy Alternatives, fees for this fall average $6,610, and by 2017 tuition is expected to triple what it cost in 1990.

Experts agree that knowing exactly what you spend is the first step to proper money management for students.

Tai Sheng Ju teaches economics and finance at William International College of Business and Technology in Toronto. As a recent alumnus of Ryerson, he says that keeping an honest record of spending during school is a necessity, pointing out that everyday spending adds up quickly.

“They don’t understand the idea of an opportunity cost,” he says. “That this money could have been doing something else.”

Students should think small-scale, or as Ju puts it, “If you don’t eat out once, you could actually take your girlfriend out to a movie.”

He illustrates his point, explaining that eating out one $10 meal a day adds up to roughly $300 a month. “Take whatever rent you have now and put $300 on top of that and you could probably have a brilliantly nice place,” he reasons. “But most people choose not to. It’s simply a choice. It’s the opportunity that they’ve missed out on.”

While any student might be horrified to discover that they’re spending a whopping $300 a month on dining out, Ju suggests that envisioning that money going towards something else is a more effective way of curbing the habit of over-spending.

National Post personal finance writer Melissa Leong also believes that keeping track of spending is the most important step when trying to comply with your budget.

“You can’t manage your money if you have no clue what comes in and what goes out,” she says. “So, make a list of earnings from your job, or your loan, or your grants or things that your parents gave you and then keep track of everything that you spend (money) on.”

Leong looks at spending as a matter of need versus want. While everyone spends differently — be it a passion for movies, clothes or beer — it’s easy for everyone to lose track of what’s leaving their wallet. It’s ok to devote a portion of your earnings to having fun and enjoying nice things (I mean, if Parks and Rec has taught us anything, it’s that it’s ok to “treat yo self”), but it’s still something that has to be factored into your budget so it doesn’t just become a trail of forgotten costs.

“When you’re looking at needs versus wants, do you need that salted caramel hot chocolate from Starbucks, for example?” she asks. “Because if you have one five days a week for a month, that’s almost one hundred bucks. It totally adds up.”

A few dollars a day on a delicious beverage might not seem like much at the time, but for some individuals, a few extra hundred dollars padding the bank account could make a world of difference.

“I almost became homeless last year,” says Zaworski. “And then I see people who actually shop at places like Holt Renfrew.”

After losing his job during an already brutal winter term, he was left fumbling to make rent. He turned to the Community Food Room, a free service from the Ryerson Students’ Union that provides access to food and nutrition for those in need. It was a helpful but strange experience for Zaworski.

“I still have nice clothes and I still have a good foundation, but I can’t afford groceries,” he remembers thinking. “It was a real harrowing experience. I had to borrow money from a cousin and eventually came out of it in the clear, but it wasn’t until I was pretty close to the brink.”

It may have been a more extreme experience than most Ryerson students will have to face, but savings can no doubt go a long way when unexpected costs arise.

“If I could go in to a hot tub time machine and go back in time, I would tell myself not to dye my hair blonde, and to save more,” says Leong, half-jokingly. “Because when there are unexpected costs that come up – for example, when I lost my textbook and I needed to buy another one and it was $50 and I hadn’t budgeted properly, it was money that I didn’t have.”

She also points to unforeseen emergencies like car repairs or replacing a lost Metropass (editor’s note – this happened to me this week, kill me. I think this interview jinxed me) as expenses that can sneak up.

According to BMO’s 2013 Annual Rainy Day Survey, which collects information on the saving habits of Canadians, 17 per cent of the participants have less than $1,000 saved away for emergencies. It also revealed that 43 per cent of those polled have less than three months’ worth of living expenses saved, while 23 per cent are living paycheque to paycheque.

Although it may be unfair to hold students to the same savings standards as working Canadians, establishing good money habits early is the key to avoiding trouble after graduation.

“Being good with your money has nothing to do with being in finance or understanding the stock market or being too young. It’s a learned habit,” says Leong. “If you learn a few good money habits today, you’ll save yourself a lot of stress later on.”

She emphasizes that in addition to monitoring their cash, students should be extremely careful with money that doesn’t actually belong to them. Credit cards can be “evil” if misused, and she also warns that student loans are not “a windfall of money to spend at the bar or to buy the latest iPhone.” It’s an easy habit to fall into since the “prospect of paying it off is so far away,” but she has tips for repaying student loans, as well.

Students borrowing OSAP have a six-month grace period following graduation which they are not responsible to make any payments and are only charged interest on the portion of their loan that comes from the federal government (interest on the Ontario portion is covered by the provincial government). It may seem like an easy break, but Leong recommends using this time to start paying back the loan aggressively. She specifically advocates for automatic withdrawals that channel money towards paying off the loan.

“Then you don’t have to think about it,” she says.

Of course, this assumes that recent graduates have obtained stable employment. For current students and grads alike, however, the bleak job market presents an opportunity to get creative with making and saving money.

A recent McGill graduate (he asked that his name be withheld for reasons related to his job in print media) got particularly crafty his first summer home from university. At his dad’s suggestion, he began selling family and friends’ “junk” for them on eBay, keeping a percentage of the sale.

He sold a lot of used and broken IKEA furniture. “The resale value on that stuff is terrific,” he says, but his best sale was a set of a neighbour’s golf clubs.

While he wasn’t making what his peers with more conventional summer jobs were, he remembers, “It was enough to take a bunch back to school and pay for entertainment all summer.”
Back at school, he ran a frugality blog where he would inform the McGill population of fundraisers, meetings and events that provided free food for students.

“Mostly, I liked to celebrate that there were samosas,” he says when asked why he started the blog. “I ate a lot of samosas.”

Like Zaworski, he made a conscious effort to scope out deals and limit his social spending. The goal was $20 a weekend.

Both of them are on the right track, according to Leong and Ju. Knowing what you make and what you spend is of utmost importance, and trying to bank a little extra for emergencies is a good idea.

It’s not as a grim a lifestyle as it sounds, either. Zaworski saves additional costs by cooking almost all of his meals. As a vegetarian, that means a lot of the same stir-fry dishes, but he maintains strict self-imposed rules when it comes to food.

“Do not eat food out ever,” he warns. “Ever. Do not do it. Bring Tupperware.”

It’s that kind of discipline with his cash that has allowed him to treat himself to a big-ticket reward once a year. Last year it was a vacation, this year it was Kanye West concert tickets.

“The experience is worth more than the initial blow to your wallet,” he says, defending the splurge.

It’s a method that provides some food for thought — as long as that food isn’t takeout.

— With files from Stephanie Chan 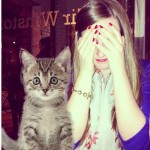 What I think when I think about running