Student doc shines a light on Ryerson’s campus after dark

When you wake up to get ready for your morning lecture, some students are just heading home for the day.

“There have been times when I am in the studio at Ryerson until 4 a.m. or even 7 a.m., late enough that I have actually walked home amongst those headed for their 8 a.m. classes,” Klymciw said. “There hasn’t been a time when I haven’t gone home and not seen someone, even at 4:30 a.m.”

Klymciw and others in his program are far from the only ones on campus during the night. In fact, there’s an entire documentary featuring Ryerson’s many “stay-uppers.”

“Those overnight experiences are kind of bewitched, obviously because you’re loopy and exhausted but also because campus at night feels so conspicuously empty,” said Ramsaran. “[Sometimes] the late hours start to feel like talking in the dark during a sleepover.”

As their late night campus experiences increased and diversified, the idea for the doc started to naturally shape itself.

“If you’re still awake by morning and people start flooding back in, you can feel the weird energy disappearing,” said Ramsaran. “So I guess the idea came from me wanting to capture that night world because it disappears so soon.”

Over the course of five days, Ramsaran and Dimitrovska talked to a wide variety of “stay-uppers,” including students and staff, each with their own unique story. 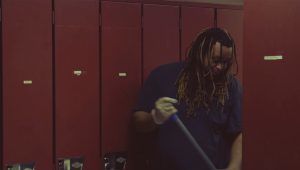 At night, it can feel “like you’re the only human left on earth and you can do whatever you want,” Ramsaran said. “And people do — one guy in the doc talks about how a group of engineers somehow got a car on top of the RAC archway.”

She also talked about ghosts and God “for like an hour” with a school custodian in the film.

The goal of the documentary is two-fold — CAMPUS:AM not only tells the story of these “stay-uppers,” but aims to reflect a student experience that’s closer to reality than many mainstream representations.

Having worked with Student Affairs to create promotional videos throughout her undergrad, Ramsaran noticed that most people who volunteer to participate in Student Affairs content are the typical faces — the club leaders, team captains, student politicians and others who are “clearly grooving” with the university experience.

“Gradually I discovered that there is a lot of fascinating, unique and difficult work being done by students that goes largely undetected because it’s not hashtagged with #RYERSONISLIFE or whatever,” she said. With that in mind, she set out to challenge that mainstream view of a university student and show the true 24-hour hustle across campus.

The late-night campus stays are not always out of necessity, as they were for Klymciw. For some students, it simply aids productivity.

“I find myself very distracted at home and I never get anything done, so I like to stay up on campus,” said Adam Asmar, a fourth-year history student. His favourite after-hours spots include Kerr Hall (if he can get in before the doors lock, he says), the ServiceHub or his faculty lounge.

On the rare instance Asmar doesn’t see another student, he still knows he’s not completely alone.

“The rats on campus like to come out at night,” he added. “So, my understanding of how big rats could get is constantly broken each time I stay on campus.”

The documentary has a third goal for Dimitrovska — to show what still needs to be done for students.

“We should be working together as a province to make tuition and housing more affordable,” she said. “A lot of [the] CAMPUS:AM footage is cool and reveals the wonderful underbelly of students out of class, but my experiences overnight at Ryerson were often because I had to book the 4 a.m. slot at the RCC mixing studio and had to crash in there until morning because I couldn’t afford to rent downtown.”