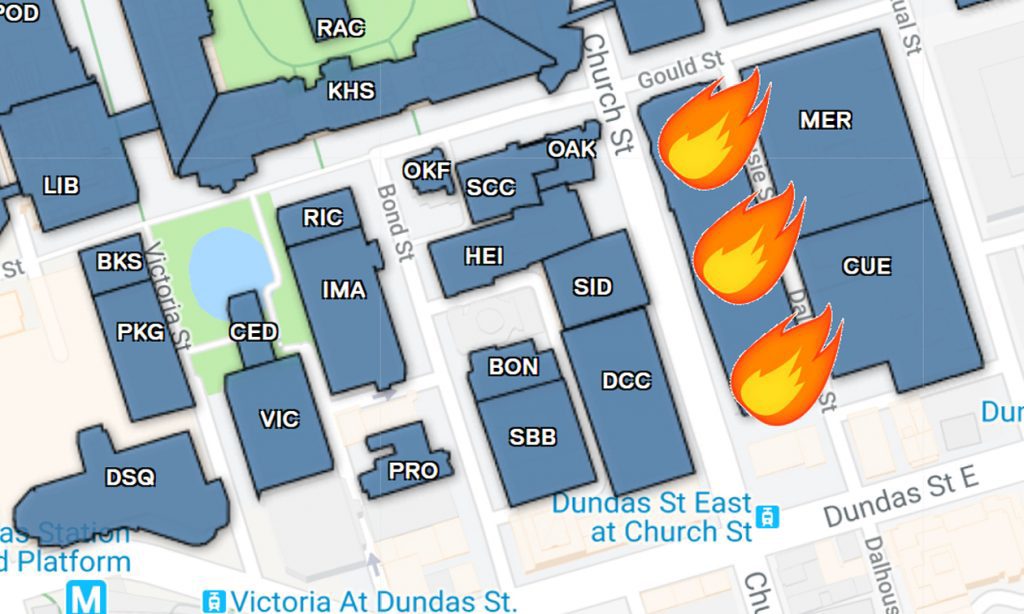 A graphic showing the location of the fire on campus on March 1. (Anika Syeda/Ryersonian)

A fire on the Ryerson campus Friday night caused the evacuation of an entire campus building with students writing midterms inside.

Toronto firefighters responded to a call at the engineering building in the area of Church and Dundas streets at approximately 7:30 p.m. last night. The fire was traced to the mechanical room in the south end of the building and extinguished quickly.

A security guard was transported to the hospital for smoke inhalation following the fire, however no further injuries have been reported.

First-year electrical engineering student Moustafa Eid was among these students. Eid was writing his engineering economics midterm when the alarm went off and students were told to evacuate.

He said students were not permitted to return to their midterms.

Eid and his classmates received an email this morning from their professor, Hakan Toksoy. The email said that all exams, finished or unfinished, had been disposed of and therefore none of them could be graded.

“I understand and empathize your frustration since you prepared for this exam and you had given up your Friday night,” reads Toksoy’s email. “I’ll do everything to resolve this situation in a way that is fair for all students. I will find out what university and departmental policies and protocols apply in this situation.”

Eid took to the Ryerson subreddit to vent his personal frustrations with the cancellation. He said he felt that he’d “aced” the midterm but, seeing that all tests had been discarded, he would now have to rewrite it.

The engineering building has since reopened. Students who left valuables in the classrooms during the fire have been instructed to look for their belongings in lost and found.