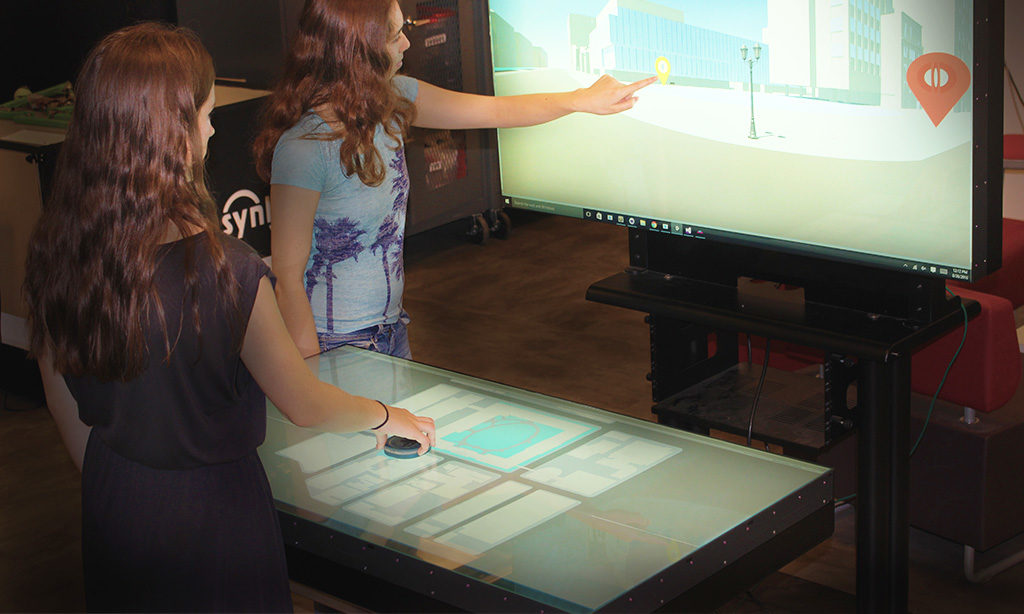 Users interacting with the interactive tabletop and wall display. The tabletop shows a map view, while the wall display shows a perspective view of the urban space. (Richa Syal)

A collaborative Ryerson research project is aiming to use 3D interactivity to change city planning.

The Participatory Campus Planning project is a pilot study within FCAD led by professors Frauke Zeller and Ali Mazalek from the Synaesthetic Media Lab. They are developing a system as the new approach to planning Ryerson’s future campus.

The prototype uses a virtual world model projected onto an interactive tabletop and a wall display. The tabletop shows a bird’s-eye view of the campus, while the wall display puts the user in a first-person perspective.

While navigating your way through campus, users can use pucks, called active tangibles, on the tabletop to move around.

He describes it as “a prototype system that combines the tangible and multi-touch surfaces with a virtual world platform to provide a participatory planning approach for campus development projects.”

The participation aspect of this project comes from the ability for users to flag certain areas around campus.

“For example, if you think a certain area on campus is dark, you can flag it with a red marker, which stands for safety,” says Haley Coppins, a research assistant working on the communications side of the project.

From there, users can select options from within the menu to make virtual changes.

“Within the safety section there would be a lamp post. So if you think there isn’t enough light, you can add it to the virtual world. You can move it, scale it and place it to see what kind of impact it can actually make,” says Coppins.

The team has developed a number of categories in addition to safety, including accessibility, recreation, sanitation and green space.

“Our thought with this is that it will actually help students, faculty and staff to visualize the campus better, and see what their envisioned changes will actually do,” says Coppins.

The idea was based on a similar mapping project called Virtual Hamilton, which Zeller worked on. The difference here is with the added technology of the interactive table and wall display.
While Zeller’s work focuses on the communications side of the Participatory Campus Planning project, Mazalek concentrates on building the technology from the Synaesthetic Media Lab.

“We’re trying to find a way to get away from the challenges that traditional participatory planning has faced. A lot of traditional methods involve town hall type meetings and pen and paper forms of activity that weren’t all that inclusive,” said Coppins. “What we want to do is help some of those challenges and create a system that will involve more of the Ryerson community into the actual planning of the campus.”

The next step is to complete the prototype.

“We are planning to reach out to other faculties and departments who also have been doing work in this field, such as the Urban Planning department,” says Zeller.

They will create a mobile app where Ryerson community members can actually walk around campus and flag issues. The team aims to develop an app that allows users to take photos and record comments as soon as they see the issues on campus.

Then the information would be sent into the system and show up in the virtual world. The goal is to highlight these issues raised by the Ryerson community so that changes can be made in the future.

This month, the team will be running focus groups at the Synaesthetic Media Lab to get feedback from students and staff about the interactive tabletop and wall display.

They hope to attract a broad range of the Ryerson community to get involved and tell them what they think of their system, and how they envision the project can help plan Ryerson’s campus.