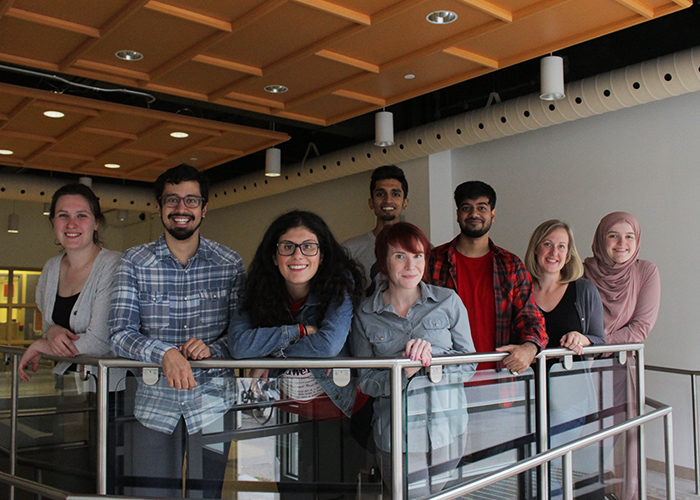 Ryerson professor Becky Choma (second from right) and her psychology lab are researching the effects of humour on Islamophobia. (Kevin John Siazon)

The irrational fear of Muslims, otherwise known as Islamophobia, might have a comedic cure.

Becky Choma has spent years researching prejudice and discrimination. The Ryerson psychology professor recently turned her focus to the effects of fear on Islamophobia, given the rise of prejudice towards Muslims in the western world.

Choma was awarded a grant for her latest project, which she hopes won’t just reveal the psychology behind Islamophobia, but offer up a solution. Choma proposes that laughter may in fact be the best medicine.

“We know that there are certain types of humour that lead to more prejudice — disparaging humour, racist jokes, these sorts of things,” Choma said. “But there’s this other element of humour that’s more sarcastic, or more self-critical, that might lead people to question these kinds of assumptions.”

Choma is referring to comedians who use humour to combat prejudice, whether it’s contained in standup material, sketches or sitcoms. She references Canadian comic Russell Peters, who questions the legitimacy of negative stereotypes in his act, as well as the 2013 documentary The Muslims Are Coming!, which follows Muslim-American comedians touring Middle America.

“There’s lots of examples of comedians who kind of push the envelope of getting people to question the stereotypes and assumptions they hold,” Choma said. “So I want to look at that in a more empirical way.”

Part of Choma’s study will include creating a database of jokes — largely from clips found online — and conducting a content analysis. Participants in the study will be separated into two groups: one group will read or be presented with disparaging humour that is likely to promote prejudice, while the second group will review examples of what Choma calls “critical humour.”

Choma said humour that fosters critical thinking might help reduce the fear that is at the root of Islamophobia. 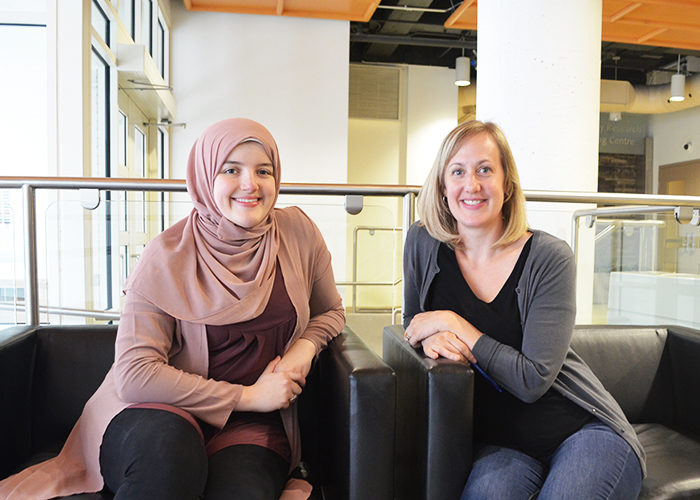 “When people feel afraid, they feel more prejudice and more intolerance,” Choma said. “If we use humour, does it dampen that effect?”

Mariam Nouser thinks it can. The mechanical engineering student and president of Ryerson’s Muslim Students’ Association (MSA) said, “comedic relief is the best type of relief,” and therefore essential to addressing sensitive issues like Islamophobia.

“Comedy is something that is universal and people understand it no matter what language they speak,” Nouser said. “It’s all about tone, about how people are saying things. So the [idea] of using comedic relief to kind of negate Islamophobia — it’s really interesting.”

As part of her research grant, Choma and her psychology lab are partnering with the MSA on community outreach efforts. They hope to start hosting an annual event where students can have a platform to talk about their experiences with humour and Islamophobia, as well as inviting local comedians to perform.

“I think this is the very first time the MSA has done something on an academic platform,” Nouser said. “The fact that we’ve been approached by faculty, that is so important to us. That’s something I really worked on last year as VP external affairs — to really bridge the gap between the students and faculty.”

While humour could potentially reduce prejudice, Nouser said she also makes jokes in her everyday life that helps her deal with Islamophobia.

“I work at Starbucks. I’m one of two hijabis,” Nouser said. “Both of us were on till at the same time. That never happened before because at my old store, I was the only Muslim there.”

The situation caused Nouser to make a joke about some of the Islamophobic incidents she had experienced herself.

“I was saying, ‘Look, the bigots can’t do anything now because they got two hijabis that are on till,’” Nouser said. “We only have two tills in our store. It was something funny, just to make light of the situation, but at the same time recognizing its urgency to be negated.”

Comedian Abdul Butt has plenty of experience using humour as a way to deal with bigotry. His childhood in Quebec was spent making jokes about the hate he encountered.

“I grew up in a smaller town where I was one of maybe six coloured people in my schooling years, so you come across those situations all the time,” Butt said. “It’s how you handle it that makes you move on with your day, and I’ve found humour, or laughing at it, or kind of poking it with a stick [helps].” 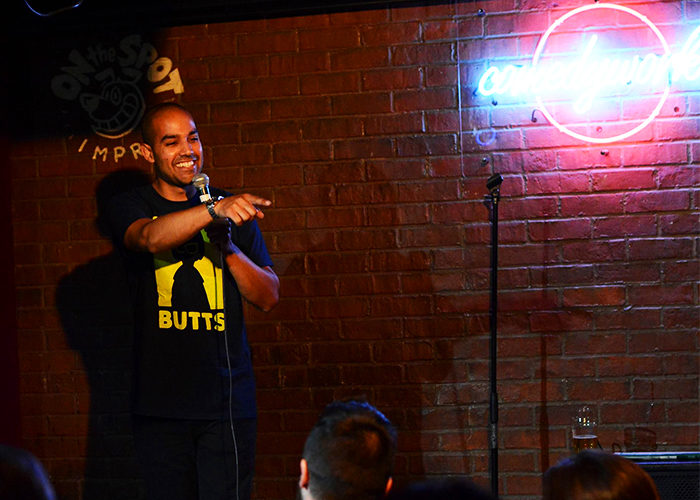 Butt has maintained that sense of humour as a satirical news correspondent on CBC’s This Hour Has 22 Minutes. In one segment from 2015, he reported from an anti-Islam rally in Montreal.

“I will go to racist protests and try and be like, ‘Oh ya, great, thanks for being here,’” Butt said. “That’s what makes me laugh because if you try to debate people on that kind of topic, it never tends to go well.”

“It’s funny that that’s still kind of the approach I take — that I’m friendly even if I’m put in a room with people who will want to kill me.”

Zarqa Nawaz believes comedy can go further than poking fun at bigots. She said it can change people’s perceptions of certain groups.

The Ryerson journalism grad and creator of Little Mosque on the Prairie, has made a comedy career out of writing about Muslim identity. Her sitcom about a Muslim community living in Saskatchewan ran for six seasons on CBC. It was recently used in a study that revealed watching the show could counter prejudice towards Muslims. 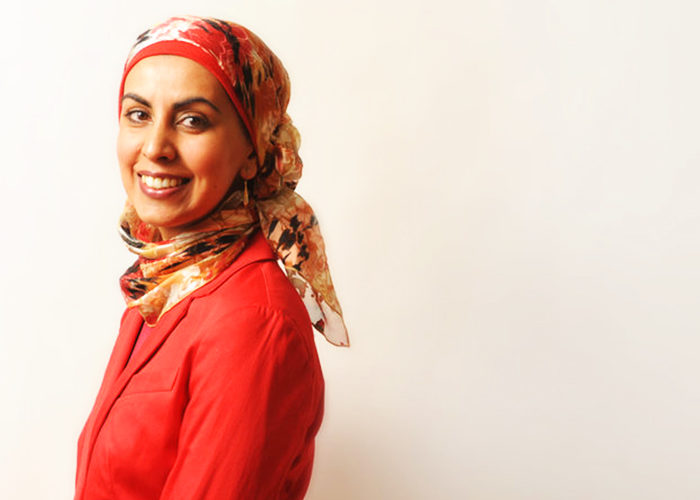 “It’s been proven that there’s a measurable difference when people watch sitcoms about a cultural group they’re not familiar with,” Nawaz said.

The study, conducted by PhD student Sohad Murrar at the University of Wisconsin-Madison, had one set of participants watch episodes of Little Mosque while another group watched episodes of Friends. Murrar measured prejudice levels before and after viewing, and those who watched Little Mosque had more positive attitudes towards Muslims immediately after viewing, as well as four to six weeks after watching the show.

“You consider Muslims ‘the other,’ yet when you laugh at them, it humanizes them and you realize you have so much more in common with them than you realized,” Nawaz said. “You see them as human beings and you see your own humanity reflected in them.”

Aisha Alfa said a similar thing happens when she’s on stage performing standup comedy. The Canadian comic doesn’t always bring up her Muslim family in her act, but she said sensitive issues like religion and race become more accessible when they’re used in standup material. 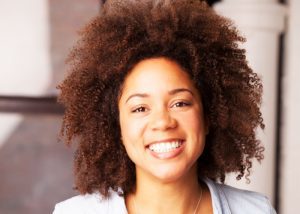 “People don’t get their guard up as fast and people give you the benefit of the doubt, especially when you’re on a stage holding a microphone,” Alfa said.

Whether it’s a standup set or a television show, Choma wants to find out whether humour can translate to intolerant people and change their prejudiced assumptions.

For Muslim students like Nouser, humour is how they survive the constant spate of Islamophobia directed at them.

“I definitely have experienced micro-aggressions at work, where folks will treat me horribly but treat my non-Muslim colleagues nicely,” Nouser said.

“Comedic relief is my way of reconciling with the fact that yes, there are racist folks out there, but it doesn’t mean I cannot go about my day.”

For more on this story, listen to Isabelle Docto’s conversation with Avneet Dhillon on the Ryersonian Weekly Wrap. 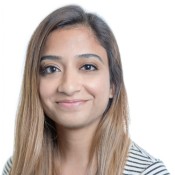