Two women working with Ryerson University have been included in Canada 150 Women, a book that explores 150 of the most influential and groundbreaking women in Canada.

Ann Cavoukian and Imogen Coe were both recognized and profiled in the book released last week. Cavoukian is the distinguished expert-in-residence, leading the Privacy by Design Centre of Excellence, while Coe is dean of the Faculty of Science at Ryerson.

The author of the book, Paulina Cameron, spent six months speaking to leading women across Canada and profiling them. Cameron wanted to recognize leaders across Canada who have made significant contributions to their fields.

“This year for Canada 150, I wanted to create an initiative that would celebrate the incredible women that are doing important and really impactful work in Canada,” Cameron said.

As for why Cavoukian and Coe were profiled, Cameron said it wasn’t a hard decision.

“Both of them are kind of no-brainers,” she said. “One of the ways we (chose) women was how they were recognized by their peers and community, but we also asked women in the field who they look up to and both of these women were brought up continuously. They’re both leaders in predominantly male dominated fields.” 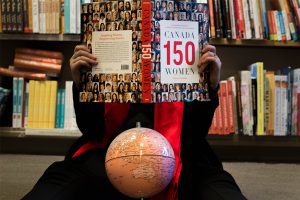 Canada 150 Women as seen at Indigo, can be found in different places around Toronto. (Photo by Spencer Turcotte and Kayla Douglas)

Ann Cavoukian served as Ontario’s Information and Privacy Commissioner from 1997 until 2014. She was excited and surprised when Cameron reached out to include her in the book.

“I was so honoured. I was blown away because there are millions of amazing women in Canada, so I was truly honoured and wanted to share my story,” Cavoukian said.

Cavoukian tells a story in the book of sneaking out of Egypt and upon arriving to Canada, having to live in a friend’s basement for six months. Cavoukian, who needed neurosurgery to have a brain tumor removed around the time of her 40th birthday, said she hopes that readers take away a message of hope and resilience from the book.

“I wanted to show young women that there will be setbacks in your life that you could have never anticipated like the neurosurgery that I had, but not to let that stop you from pursuing the path that you have chosen.”

In 2016, the Women’s Executive Network (WXN) named Imogen Coe one of their Top 100 Most Powerful Women in Canada. Coe feels we should consider having more humanity in science.

“We want all of humanity to participate and to be included, and we need to recognize that it needs to be a place that we are cognizant of everybody’s individual humanity,” she said.

In her profile, Coe publicly opened up for the first time about being a survivor of intimate partner abuse.

“There are stereotypes around people who have had certain life experiences such as domestic violence,” she said. “I thought it was the time to tell some of those stories and time to challenge some stereotypes.”

Cameron hopes that Canadians who read the book can feel proud of the women leaders throughout the country and hopes to see more of a change in who is seen in positions of power.

“I want young girls to read these stories and feel inspired and energized that here in Canada they can make any impact or change they want to.”