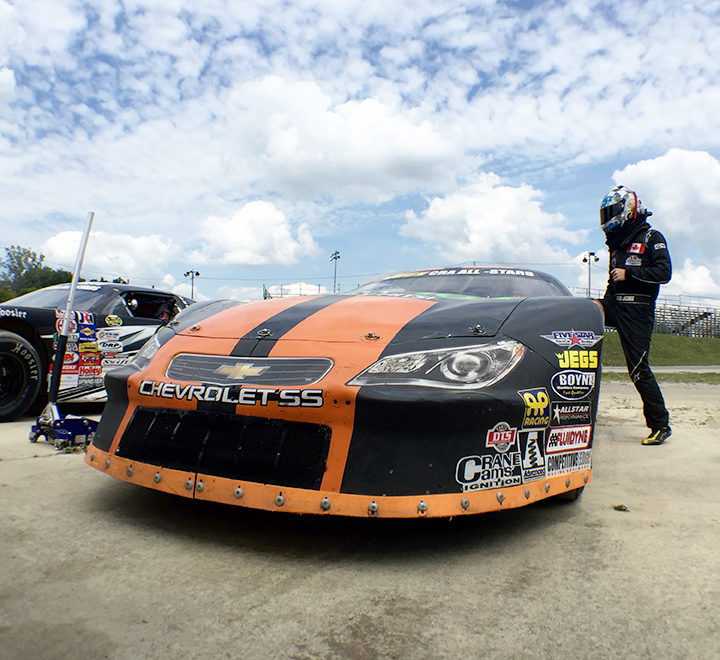 Three years ago Jaxson Jacobs, then 14, was driving a practice run around the track at New Smyrna Speedway near Daytona Beach, Fla. As he came to the end of the straightaway, traveling at what he estimates was 240 km/h, Jacobs’ motor exploded and his car slammed into the wall. He was knocked out cold and his car was destroyed.

But it didn’t suck because of the injury. As Jaxson says, he’s “been knocked out a lot.”

What sucked was that this practice run was part of Speedweeks, a 10-day event leading up to NASCAR’s biggest race, the Daytona 500. The 2012 season was the first time Jaxson was old enough to race in the event, in front of all the top names in racing. He was more embarrassed than anything else.

“If you’re a race car driver, chances are you’re kind of crazy and you just have to accept that,” he says. “If you let the fear of wrecking get in your way, you’re never going to succeed.”

It’s one thing for the driver to be calm in this extremely dangerous sport, but imagine being the parent of a driver and watching your child hit a wall at 240 km/h. Now imagine you had four children who all put their lives on the line for this sport. That’s the life of the Jacobs family, who make up the Jacobs Racing team.

Jaxson is the third of five children in this family from London, Ont. Parents Ken and Jodi had Marc, age 23, and Savannah, 22, before him. After Jaxson came in 1997, Paighton, 15, arrived and then Shane, 12. Savannah rides horses, but all the other kids in this family drive race cars.

“It was scary when they first did it, seeing lots of accidents,” Jodi says. “But I guess I’m not as scared as I used to be.” 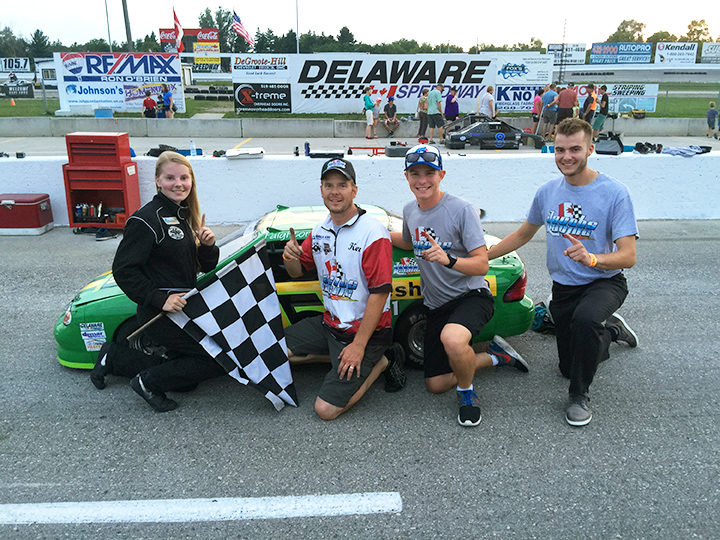 Racing has always been a big part of the family’s life. Jodi’s uncle, Don Duncan, was in the pits when legendary Earl Ross became the first (and only Canadian) to win a race in what was known then as the NASCAR Winston Cup. Ross won the Old Dominion 500 at Martinsville Speedway in 1974 and had plenty of other top five finishes with Duncan helping out.

Watching NASCAR on the weekends is still a family ritual, but what turned the Jacobs from fans to drivers was something much more local.

Delaware Speedway is a quarter-mile track located only 10 minutes from the Jacobs’ home. These days, there’s a good chance that if you go to see the junior races on Wednesday nights or the senior races on Fridays, a Jacobs driver will be featured.

But back when oldest brother Marc was nine, the family were just fans. Friday nights, sitting in the blue seats built into the side of the hill that looks down onto the track was a family ritual. One night at the track, there was a display of some junior late models (cars half the size for kids to drive) for people to look at. Ken picked up a pamphlet, as requested by his son, and without any prior experience, Marc was driving his own car at Delaware Speedway within a year.

“I’m not sure what it was, but it’s an appealing sport to be a part of as a kid,” Marc says. “Loud engines and you smell the fuel. It’s fast, exciting and it’s something that any kid would want to be a part of.”

Within three years, Marc was the champion in the local Krown Junior Racing League. Jaxson loved watching his big brother race and couldn’t wait to get started the following year when he would be eight and old enough to drive a junior car.

Jaxson recalls being “nervous as hell” before getting into the car for the first time, but comfort set in once he started driving.

“I felt at home, my first time doing it,” he says. “I grew up with it. It was what I knew, so it didn’t seem anything out of the blue.”

Jaxson, like his brother, found success at a young age, winning a championship at the Grand Bend Speedway in 2010 and another on a local dirt track the same year.

Paighton watched with curiosity as her older brothers took to the sport and began doing well. By the time she was eight, she wasn’t sure if she wanted to drive or follow her sister in what Jaxson calls “the one-horse-power sport.” But since the family had an extra car not being used, Paighton decided to give it a try.

“So I started going faster,” she says.

Undying support from the family has helped the racers improve and the team grow. When Marc was first starting out, they kept his little eight-foot junior car in Jodi’s parents’ garage. As more kids began driving and more cars were added to the team, they had to find a new place to store them. So a 1,000-square-foot space was cleared behind the family’s party tent rental business and it became the garage, the place where everyone would hang out.

Now there are between nine and 11 cars in the garage depending on who you ask. As much time as possible is spent there fixing motors, changing oil and detailing the cars, among other jobs. Ken says the racing team runs on a budget of about $50,000 a year, which comes mostly from sponsors. Jodi adds that all the prize money her kids win is invested back into the cars.

Ken grew up on a farm and learned some things about engines while working on tractors. He’s made it his mission to teach his young drivers about the cars and how to fix them. While they have a couple crew members help on race days, the Jacobs basically do all the repairs themselves.

“I never raced myself so I enjoy heading the crew and turning the wrenches,” Ken says. “When Marc got into it, I guess I realized that I enjoyed (racing) too.”

Jaxson says it’s important for drivers to know how the car works. If anything were to go wrong in a race, he can better help the crew understand the problem and possibly fix it.

But what Jaxson, and all the Jacobs, cherish most is the ability to learn and be together in the garage. They all say this is why they have a close knit family and why they’re able to race all over North America and win. The older siblings help the younger siblings learn, and inspire them to be the best.

“Marc was kind of the guinea pig going through it and I learned so much from him,” Jaxson says. “I hope (Paighton and I) go down the same path … because it obviously brought (Marc and I) very close.”

“I view (Marc and Jaxson) as mentors,” Paighton added. “Without them, I wouldn’t be racing.” 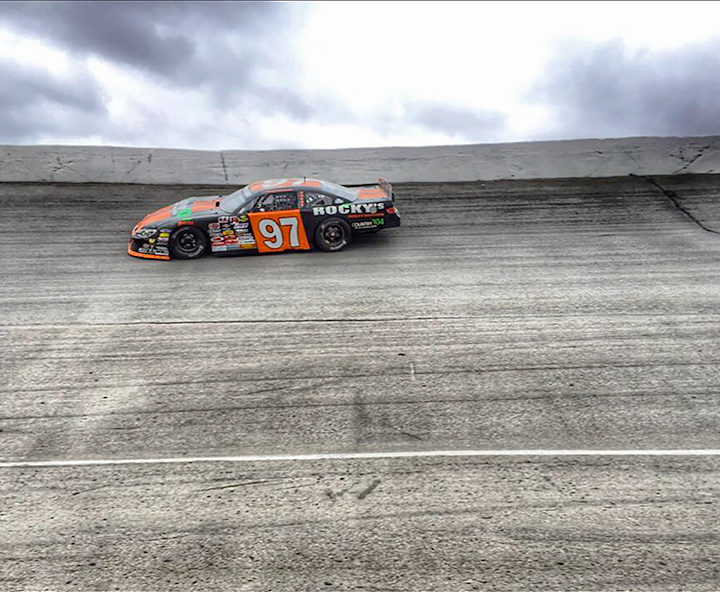 The first race of the season is still a few months away, on May 1 in Springport, Mich. A few days before, the family will load up their motorhome with food, and three trailers with race cars, and head down Highway 401 in a convoy.

Once they arrive, the family will set up camp, then take a walk around to familiarize themselves with the area and, most importantly, the track itself. Jodi will make sure the crew and her family are fed, while Ken will help with any last minute tune-ups needed on the cars.

This will be the first season Paighton drives the full-sized, late-model cars with her older brothers, so Jaxson and Marc will spend the days leading up to the big race helping her prepare. The first time Paighton drove a late-model was in December. Although she wrecked that day, she says she can’t wait to get back out there.

“I’m excited to get into it this summer but still nervous,” Paighton says. “I obviously don’t want to wreck again.”

After the race, everything will be packed up and the team will head home. The 2016 season will put more of an emphasis on fun than going for a championship. With the Canadian dollar tanking and the kids starting to have other commitments, the family has decided not to join just one championship tour and instead pick and choose the races they’d like to participate in. This will likely cut the total races this year from 20 to 15, but more of them will be in Ontario than the U.S.

“I don’t want them to feel guilty about doing something else,” Jodi says. “This way it will all be for fun.”

Marc has an undergraduate degree in history and is now taking some business courses at the local college with plans to start his own business down the road. He says there are plenty of opportunities to go into business while staying in the sport.

Paighton is still in high school and isn’t sure what she’ll be doing for a career yet. One thing she does know is that she’ll be racing around southern Ontario for as long as she can.

When asked about the prospects of racing as a pro on the NASCAR Sprint Cup circuit, Jaxson smiles. It’s clearly his dream to do so, but he says sometimes dreams are out of your control.

“Unfortunately, racing has kind of gone the way of ‘whoever has the most money goes up the quickest,’” he says. “It’s really hard to go up to someone and say ‘can I have $10 million so I can race NASCAR for a year?’”

Marc agrees that getting onto the pro tour is very difficult, but says every team starts somewhere.

“Being younger and being a first generation team in a way works against us,” Marc adds. “A lot of guys we race against come from generations of racers, so they obviously have an experience advantage over us.”

Jaxson went into sports media at Ryerson with the dream of covering NASCAR events. But he’s also interested in the business side of sports and looks forward to learning more about it as he progresses through his time in school.

“We’ll see where it goes but if it ends up with NASCAR, that would be awesome,” he says.

What do you want from your student leaders?