For the month of November, the RAC is offering a free visit to non-Ryerson community members, and certain classes have been designated part of a “Trans & Allies” series, sending a message to transgender individuals that these spaces are particularly inclusive.

The centre also posted the locations of each of its all-gender change rooms —  which opened at the end of 2017 — to its website.

While the RAC’s initiatives aren’t as high-profile this year, Andrew Pettit, manager of recreation, said they wanted to focus on making adjustments at the ground level to make their programs and facility more welcoming.

“It’s small steps really, but we need to take them, and they can be big steps for people to understand that we are different than your high-school experience or your grade school experience, if it wasn’t (a) positive (one),” said Pettit.

In 2011, Egale Canada Human Rights Trust released results from its first survey of homophobia, biphobia and transphobia in Canadian high schools. The findings revealed that 49 per cent of youth identifying as LGBTQ and 42 per cent of those with LGBTQ parents felt the most unsafe in gym change spaces. In particular, 52 per cent of trans youth felt unsafe in change spaces and bathrooms.

“I’ve been an athlete my whole life, and I’ve never really felt safe in athletic spaces, even when I identified as cis,” said the co-facilitator of the Trans Collective, who goes by the name Goldbloom. The Trans Collective is an equity group that advocates for and supports Ryerson’s trans community.

Goldbloom added that athletic spaces can have an aggressive and judgmental atmosphere because the focus is on the physical body, when it should really be about feeling healthy.

Advertising the location of all-gender change spaces on the RAC’s website is intended to send a message to the trans community that they can feel comfortable here, said Goldbloom. At the same time, it also lets the general community know that these are transpositive spaces and to be respectful to other groups.

Outside the change change rooms, fitness instructor specialist Alan Faigal said he’s worked towards reconceptualizing the spaces he teaches in to make them more inclusive and safe. Faigal, who teaches the Masala Bhangra dance class every Thursday evening —  one of the designated Trans & Allies classes this month — said that being an instructor for these classes means recognizing his own privileges and biases.

But this isn’t something he always understood. Faigal said he learned this lesson when he was called out for his description of the Masala Bhangra. As previously explained to him, Masala, which is defined as spicy, brings a feminine Bollywood grace, while the Bhangra is a masculine dance.

“I’ve never referred to it as male-female, but even that language of itself could be interpreted that there is a binary,” said Faigal. “I think it’s just the continued need for us to practise self-examination and unpack that maybe we are unintentionally perpetuating certain biases, so that was eye-opening for me.”

Rewording the way a dance is described might seem like a small change, but just like the other initiatives taking place at the RAC, Goldbloom said the small details can be a big step forward for the 2SLGBTQ community.

While Goldbloom acknowledges the progress being made, they also suggested additional initiatives that Ryerson and other institutions can adopt to improve their inclusivity towards trans people in sports and athletics. These initiatives include hiring trans people for administrative positions, and providing scholarships and sponsorships for trans athletes.

Beyond the administrative level, for users of athletic spaces, Goldbloom said. “It’s also about understanding how you act in a space and what kind of space you take up as a person.”

Goldbloom said it’s encouraging to see post-secondary institutions being more welcoming to the trans community within the realm of sports and athletics, but they noted that there’s still more to be done, both at Ryerson and within the broader sports world.

Pettit acknowledges that these additions won’t erase the transphobia and homophobia that has historically transpired in these spaces, but he hopes they will encourage people to give their facility a chance and get the ball rolling on bigger initiatives.

“The ultimate thing is that there is something really powerful about being in your own body, being in motion, the agency, the empowerment that comes from that and from feeling connected to your community,” said Pettit. “So this is why we want to share this with people because when you can knock down barriers for people and create a welcoming environment they have a chance to connect with that, with themselves and with others.” 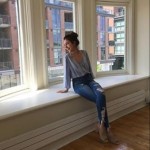