What does it mean to “run like a girl”? For Ainsley Garbut, it means spreading stillbirth awareness, after giving birth to her stillborn daughter two years ago. For Rora Blue, it means learning to handle her late-stage Lyme disease and creating art. For Ash Soto, it means advocating for body positivity after being diagnosed with vitiligo at the age of 12.

These women are only three of the dozens sharing their stories on yourunlikeagirl and challenging stigmas through the female-empowering online series. 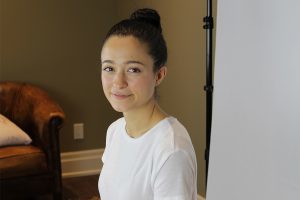 After speaking with family and friends, Addesi realized the negative impact social media can have on young women. (Photo by Kate Skelly)

Nadia Addesi graduated from Ryerson’s School of Social Work in April with a degree in her hand and years of internship experience in her back pocket, but no job waiting for her on the other side. Not being one to lay low, she initiated her own project, inspired by Humans of New York and an appetite to use social media for positive change.

Now, with over 32,000 Instagram followers, and an inbox full of requests to be a part of the series, yourunlikeagirl has become a platform for women to shed light on their imperfections, obstacles and vulnerabilities, while showing the world how far they’ve come.

From a burn survivor, to a Special Olympics champion, to women battling cancer or leaving abusive relationships, the series taps into a deeper side of social media that young women don’t swipe past on their explore pages every day.

“It’s real and it’s what people want to see,” Addesi said. “So many people can be going through so much and you’d never guess it just based on their social media or how they present themselves. It’s made me realize that you don’t know everybody’s story.”

This mindset stemmed from one of her first social work courses, where her favourite professor, Steven Solomon, asked the students to write down why they enrolled in the program. They all folded up their papers and threw them across the room, picking up each other’s and reading them aloud.

Addesi remembers realizing that nobody had the same answer — each student’s story was different. She said if it hadn’t been for her social work experience at Ryerson, yourunlikeagirl probably would not exist.

Solomon describes Addesi’s journey at Ryerson and where she is today as a solid piece of evidence of what the social work program can produce. He says yourunlikeagirl is something to keep an eye on.

According to Solomon, even the series’ name is changing how people think.

“The work that she’s doing is putting us on the road to where the day will come when ‘run like a girl’ will be the highest form of compliment,” he said.

For Jennifer Kriski, this road is being paved by genuine conversation.

Kriski was featured on yourunlikeagirl’s Instagram in October, opening up about her experience with anxiety and panic disorder. It was not until she found her voice, shared her story, and began reading the dozens of comments on her post, that she discovered the kindness in strangers.

“I was smiling for days and days. I had to screenshot almost every comment because I was so shocked at how many people were replying to me. I even take it out and read the comments when I’m down, and it instantly cheers me up,” Kriski said.

This past weekend, Addesi rallied female friends and family to shoot an introduction video for yourunlikeagirl’s YouTube channel, set to launch at the end of the month.

Women crowded into the brightly lit room, taking their turns filling the empty stool in front of the white backdrop in the centre of the room. Addesi asked each of them what they love about being a woman. 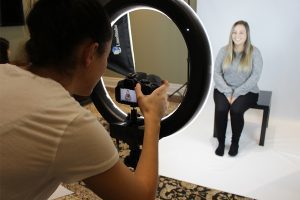 From getting to play around with makeup to someday becoming a mother, the responses ranged across a variety of perspectives.

One woman, in particular, said she loves being a woman because of the opportunity to be a positive role model and break down barriers for females around the world.

When Addesi asked them what their least favourite thing about being a woman is, the responses were similar across the board — the challenge to live up to societal expectations.

“As individuals, the dreams we have, our accomplishments, our thoughts and everything that makes us unique — that defines us.”