With the provincial championship won, the champagne popped and history made, the locker room in Ottawa was a scene that brought downtown Toronto and Ryerson into the nation’s capital.

What they just achieved had never been done in Ryerson history. Last Saturday, the Ryerson Rams men’s basketball team won its second straight provincial championship. With that win, the team moves on to this week’s nationals as the No. 1 seed. “What they did today was beautiful,” coach Roy Rana said, following the team’s win against the Carleton Ravens.

But now the focus shifts to the national championship tournament, which begins Thursday evening at the Scotiabank Centre in Halifax. Ryerson will be playing at 5 p.m. in the quarter-finals against the number eight ranked Saint Mary’s.

The Rams have finished in third place at nationals for two straight years. They’re looking to snap this streak of bronze in Halifax at The Final 8 tournament.

The culmination of Canadian university basketball is being hosted by the Dalhousie Tigers this week. It’s the first time it’s being held in Nova Scotia’s capital since 1987.

The Rams hope they’ll end that tournament duplicating the celebration that took place after the OUA final. 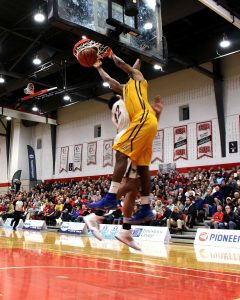 After that win, the team, aware of what they just accomplished, took to Instagram live in celebration singing Drake’s infamous 2015 record, but with a timely twist. “We going back-to-back. OUA Champs, yeah we back-to-back,” the team screamed in unison.

Adika Peter-McNeilly was gleaming in the locker room — and with reason. He walked his fans play-by-play through his monstrous dunk for the Rams in the Wilson Cup finals, giving his team a 70-66 lead with four minutes 10 seconds remaining. The Rams never looked back, winning for the first time at the Raven’s Nest in 17 years.

Peter-McNeilly dropped a smooth 29 points, shooting 50 per cent from the field with 12 rebounds in a dominant performance for the guard playing in his final season as a Ram. He’ll be pivotal for nationals, where Ryerson holds the number one seed going into the tournament.

He remembers the national championships last year, where Ryerson lost in the semifinals against Calgary. “That was a bitter taste in my mouth, losing that semifinal game,” he says. It’s still in the back of his mind he says, fuelling him to this day. “Those are daily reminders how much I want it. I just thought about the year before and how I don’t want to feel like that again. I want to be a winner.” 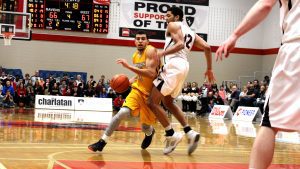 Ammanuel Diressa blows by the Carleton defender in the fourth quarter. Ryerson went onto win the game and win the provincial championship. (Andrea Vacl/Ryersonian Staff)

Ryerson president Mohamed Lachemi admits that he was hooked watching until the final buzzer. He says that he was in touch with coach Rana after both games this past weekend.

Last year, Lachemi was doused with a Gatorade bucket full of ice water after the provincial championship victory at Ryerson’s Mattamy Athletic Centre (MAC) beside Peter-McNeilly.

His message to Rana was that he’s proud of the team. “Last year, we also achieved something that is very unique in the history of our teams, back-to-back wins. I’m extremely happy, proud of them.”

OUA Finals MVP, Ammanuel Diressa, summed up the goal moving into nationals very simply. “We want to make history for the program.”

“We now have some unfinished business,” said Peter-McNeilly. “Knowing that it’s time to win a national championship.”