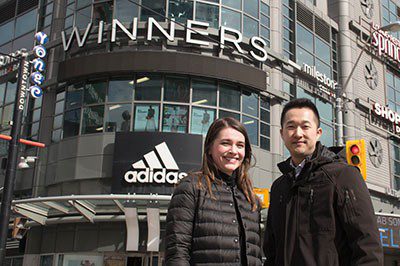 Ksenia Sergueeva, a graduate student in the master program of science in management, with Seung Hwan (Mark) Lee, an associate professor at the Ted Rogers School of Retail Management. (Courtesy Ryerson University)

Ever wonder what is so relaxing about chewing gum? New research from the Ted Rogers School of Retail Management shows that chewing gum may lead to more time browsing and thinking about what to buy while shopping.

In an interview, Ryerson professor and co-author of the study Seung Hwan (Mark) Lee says that the motive behind the study was exploring what would help consumers think or browse more in a retail environment.

Ksenia Sergueeva, a graduate student in the master program of science in management, is the other co-author of the study. “Retailers have been trying to influence consumer behaviour for years now, through music, different scents or colours,” she says in a news release. “They have also experimented with in-store sampling to see if that persuades people to spend more time in a store, giving them a chance to familiarize themselves with different products.”

Lee says, neurologically, chewing is associated with increased blood flow, which leads to a reduction in stress and an increase in concentration, arousal and mood. While the association of this activity with chewing was known from previous research, Lee says he wanted to figure out the specific impact of chewing in a retail setting.

Five studies informed the research. The first four compared the behaviour of 308 students from a U.S. university. Some of them chewed gum, and some did not.  Both groups were given a variety of tasks to complete, including imagining that they were shopping at an online retailer for a book and spending $100 on Amazon.com to buy gifts for three of their friends/family members.

In all of these studies, researchers concluded that those chewing gum spent more time thinking about their purchases and browsing.

In the final study, researchers studied 56 consumers in a grocery store. Half chewed gum and half did not. Based on the effect of chewing, researchers anticipated that people chewing gum would see a difference between their predicted behaviour and actual behaviour during the course of their grocery shopping experience.

According to Lee, however, increased thinking and longer browsing time doesn’t necessarily lead to more money spent in store.

Lee says the results are a useful tool for retailers to subtly influence consumer behaviour.

How to ace your exams