The City of Toronto’s water department has blacklisted Ryerson from using its water trailers after what it called “highly unprofessional and disorganized” conduct during the Ryerson Students’ Union’s (RSU) Week of Welcome.

Toronto Water informed the RSU and the Continuing Education Students’ Association of Ryerson (CESAR) in a Sept. 18 email, that its HTO To Go water trailers would “no longer attend events at Ryerson University” after RSU staff moved one without the city’s permission. 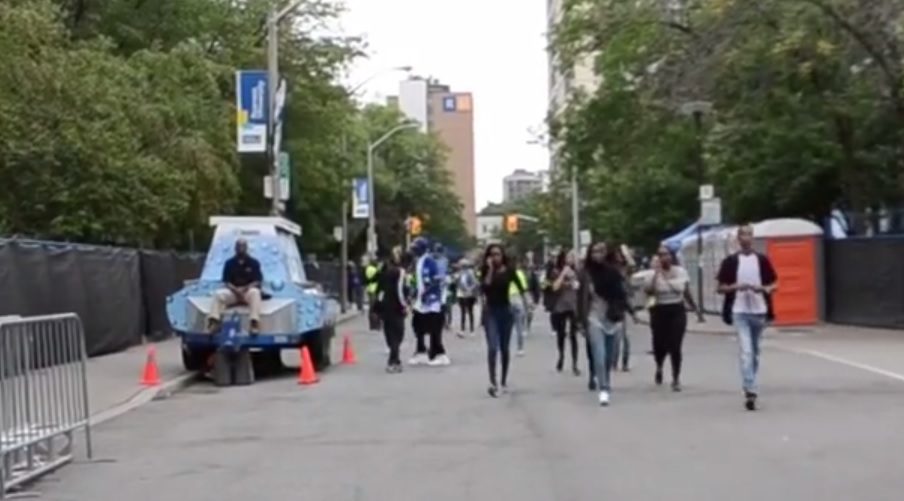 Someone was seen sitting on a parked water truck after it was moved, in this screen grab from an exclusive Ryersonian video (Kascha Cassaday/Ryersonian Staff).

The email claimed that the RSU’s actions on the morning of Sept. 11 “endangered public safety” and “potentially contaminated” the truck’s water supply.

But RSU president Andrea Bartlett said her staff was acting to protect public safety, especially in light of the large crowds expected for Drake’s performance that night.

“We had to move the truck because (Toronto) police told us it needed to be cleared out,” she told The Ryersonian. “We called HTO truck to let them know. They refused to allow us, but it had to be moved to accommodate guests to the front of the stage.”

The water trailer, on site for an RSU campaign promoting tap water as a safe alternative to plastic bottles, was parked on Gould Street at the corner of Victoria Street on Friday morning. RSU vice-president operations Obaid Ullah said police and security agents told him the trailer’s location in front of the stage was dangerous, so Ullah instructed his staff to call the city. After city authorities declined to come move it, event organizers unhooked the trailer from its water source and moved it to a location about 300 metres east, across from Balzac’s cafe.

Toronto Water’s customer support supervisor, Lisa Botticella, wrote in the Sept. 18 email that the move endangered the city’s property and compromised the safety of the trailer’s drinking water. She claimed that by parking the trailer in an “unstable” location and “haphazardly” stacking materials, RSU staff posed a threat to pedestrians. She called the incident an “unacceptable risk and hazard.”

Botticella also blasted the union for its “poor planning,” calling it “highly unprofessional and disorganized to make a last minute request for something that has already been decided on.”

Bartlett said she takes the contamination issue “very seriously,” but that the RSU had “no other options.” She said she was informed of “some damage” to the trailer, including scratches, but called the city’s charges “unfair,” given the risk of leaving the trailer in the midst of a bustling crowd.

The ban has caused problems for CESAR’s own frosh festivities, which followed the RSU’s Week of Welcome. CESAR president Denise Hammond told The Ryersonian that the city refused to provide a water trailer for an event her union planned to hold on Sept. 22, despite the fact that CESAR played no role in organizing the Parade and Concert.

“We asked for it on specific days, to talk about our commitment to a bottled-water free campus,” she said.

Hammond said CESAR was forced to “drastically alter” the event because of the water trailer ban. She said the incident has tarnished the reputation of both students’ unions, as well as the university as a whole.

“CESAR is being painted with the same brush as the RSU,” she said.

The truck’s unauthorized relocation wasn’t the only incident that angered city water officials. Toronto Water press representative Lyne Kyle told The Ryersonian that city staff had to clear numerous obstacles, including potted plants and furniture, to make way for the trailer when it first arrived. The workers were not properly equipped to move the obstacles, according to Kyle, “posing a health and safety risk.”

According to Hammond’s account of a phone conversation between her staff and city officials, there were also concerns that concertgoers had vomited in the truck’s water basin. Kyle said that she has not heard of this problem, nor was she aware of any attempts to share it with anyone at Ryerson University. Ullah said that it would be impossible for vomit to enter the basin, as his staff secured it to eliminate any chance of contamination.

Kyle said that Ryerson would remain under the ban until the city receives “documentation that outlines how these issues could have been prevented, as well as measures … to ensure this does not happen again.” She told The Ryersonian that, as of Friday afternoon, the city had not yet received a suitable response.

Bartlett said that the RSU contacted the city to inform them that CESAR is separate from the RSU, as is the university itself. She said that she sent the required documentation to the city on Friday, and is “hoping to hear back soon.”