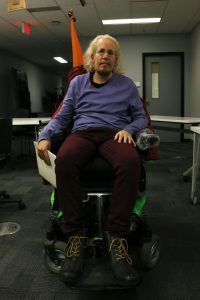 The arts are often thought of as a purveyor of social progress and safe haven for those suffering from marginalization. But what happens when your identity is too complex for even the arts community? Chris Ablett is a 40-year-old transgendered male artist living in downtown Toronto with his husband, Erik. He also deals with chronic pain and drives a power wheelchair.

“[It’s] one too many barriers for people to take me seriously,” says Ablett on Toronto’s art community, adding that he is not eligible for grants because of his status. “Nothing is offered to us…I know where I’m not welcome.”

Last year, Ablett applied for the Deaf and Disability Arts: Materials for Visual Artists grant through the Ontario Arts Council, which offers $500 to the selected individual. However, after calling the council twice to seek support with his application, Ablett was offered little help. This left him feeling outcasted from the community, and “a bit uncomfortable, when the grant was for people with disabilities.” He also expressed frustrations with the focus on commercialization in Toronto’s art community. He said that he was often turned away or unwelcome at art galleries because of his unwillingness to participate in monetizing artists’ work.

Ablett receives financial assistance from the Ontario Disability Support Program (ODSP).  “As a person with multiple disabilities, that’s not feasible for me,” said Ablett about the pressure to continuously supply all his own materials and art space. “I wish the Ontario Arts Council was more open to feedback, but it’s not just them. I had problems with art galleries too, even just with wheelchair accessibility and also because of my sexuality and with people being mean and belligerent to me.”

But funding and discriminatory barriers haven’t stopped Ablett from pursuing art. His body of work includes an annual pornographic calendar that addresses the issues of oppression and violence against queer and disabled people. “We have to be creative. It’s creativity that can drive us to progress and not cycle the same issues,” he says.

Even within the disabled community, Ablett says he is often faced with misunderstandings of his sexual identity, adding that “it’s hard for people to understand [his husband and him] are not brothers.” In a workshop titled, “Mapping Safe Crip Spaces,” which Ablett attended, he discussed his concerns about the need for diversification in the media and arts. Eliza Chandler, who hosted the event in Ryerson University’s Transmedia Zone Tuesday evening, said, “We so easily assume we all have access…It’s not a one type fits all…It’s not about creating the bare minimum.” Chandler added that some grants, like the one Ablett applied for, favour those who don’t receive ODSP. She said that the grants count as income and factor into the recipient’s ODSP cheques, meaning that Ablett would have only gotten a fraction of the $500, if any at all. “It seems like the only artists who can be involved in art shows and art communities are people not on ODSP,” says Ablett.

The workshop also brought in artist, journalist and Ryerson graduate Maayan Ziv to speak about her experiences living with muscular dystrophy as someone who works with multiple forms of media. Ziv graduated from both Ryerson’s Radio and Television Arts program and Master of Digital Media program. She used her storytelling abilities to create various pieces of media, including a CBC Radio show called “Shifting Spaces,” to bring attention to accessibility across physical and online platforms. Ziv says it’s about “creating awareness through action” because she was tired of waiting for other people to help her. She added, “I don’t want to spend my whole life researching disability…I want to go do things.” 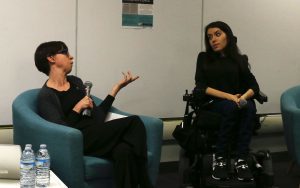 Ablett is also a big believer in not taking the backseat when it comes to others understanding his disability and how it interacts with his sexuality. He attended the workshop to make connections and talk to people who may or may not understand his identity. “I want other people to know I exist,” said Ablett. He added that many people are often too focused on his physical disability that they fail to realize the extent to which an individual can possess an intersectional identity.

Ziv and Chandler both agree that the notion of disability must move beyond the mere concept of physical barriers. They said that disabilities are diverse in nature, but most people only recognize the visible ones. Like Ablett, Ziv wants everyone, especially the arts community, to humanize people living with disabilities. “I should not be congratulated for going down the street, it’s not my big day. It’s just me living,” said Ziv.

A large part of Ablett’s art is about “addressing the reality of who [he] is” and learning about others. He said he prefers interactive workshops, like “Mapping Safe Crip Spaces,” because they allow him to be himself while making human connections that aren’t online. Moving forward, Ablett urges for more inclusion of safe spaces in the arts community and the awareness of all marginalized people. “I want to use my voice to validate other people’s struggles and just the bullshit that they might deal with…I’m white and I have that privilege and I want other marginalized people without a voice to know that I see them too.”

The risks and realities of journalists in Mexico