While most Ryerson students returned to the classroom this week, several students and faculty from the collaborative nursing program between Ryerson, George Brown and Centennial College have had their classes halted as a result of the Ontario college faculty strike.

After failing to reach an agreement between the Ontario Public Service Employees Union (OPSEU) and the College Employer Council (CEC) by the 12:01 a.m deadline Monday, about 12,000 faculty at Ontario’s 24 colleges went on strike in order to advocate for increased job security for part-time workers and greater academic freedom, among other issues. 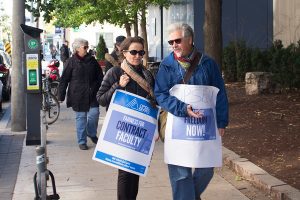 Around 12,000 Ontario college instructors have walked off the job. The strike affects some Ryerson students in the collaborative nursing program. (Photo by Aidan Macnab)

Students in the collaborative nursing program spend the first two years of their study at whichever of the three campuses they’re accepted to, while the final two years are completed at Ryerson.

For students whose home site is Ryerson, and for all Ryerson faculty and staff involved in the program, all classes and placements will continue as planned and according to their schedules. Those whose home site is George Brown College or Centennial College have had their classes cancelled.

Andrew Borkowski, a contract lecturer at both George Brown and Ryerson, feels the fight for job security is imperative to the overall quality of education provided to students.

He joined the picket lines outside the Sally Horsefall building Monday where he said, “part time contractors are not as easily accessible as full time, they do not have their own offices and often spend more time travelling to classes than in the classroom.”

Sonia Del Missier, chair of the college employer council, said the strike is completely unnecessary. “The final offer was more than reasonable given what the union is asking for is unaffordable and would cost the system an additional $250 million annually”she said.

Tom Tomassi, a professor at George Brown, said that OPSEU reduced its original 16 demands to three basic and fundamental requests. OPSEU is asking for a 50/50 ratio for full-time faculty to contract staff, a bigger voice in academic freedom when it comes to academic decision-making and increased job security for part-time faculty.

Tomassi said the union’s final offer was rejected because it was 10 times worse than the previous offer and didn’t address any of the issues. The CEC is tasked with negotiating a reasonable offer so teachers can return to their classrooms. Teachers will not be returning unless council can propose a solution that will reduce the number of part-time faculty.

Beth Stockton, a full-time contract professor at George Brown, left her classroom behind to picket at Ryerson on Monday. She feels that as unionized workers, teachers should support those in their circle who are directly affected. Although she is fortunate to be contract full-time, she said, “work overflow often falls onto the shoulders of full-time faculty.”

“Part-time contractors are not as easily accessible as full-time. They do not have their own offices and often spend more time travelling to classes than in the classroom,” Borkowski said.

Contract faculty at Ryerson are represented by CUPE 3904. Some of those Ryerson CUPE members teach at the George Brown and Centennial campuses as part of the faculty of community service.

Last week, Ryerson made arrangements to move classes taught by these Ryerson employees to Ryerson’s campus in anticipation of the strike. Ryerson employees are required to continue attending and teaching classes, however the union has voiced support for the striking OPSEU staff and encouraged any staff members to join the picket lines if they wish.

Former image arts student builds a life out of lego