The “Tiananmen Square +25 Exhibit” is on display at the Credit Union Lounge in the Podium Building. (Emanuela Orsini/Ryersonian Staff)

An exhibit commemorating the 25th anniversary of the Tiananmen Square massacre currently on display at Ryerson is a nod to both China’s past and present.

The current pro-democracy protests in Hong Kong echo the demonstrations that took an ugly turn in Beijing in 1989.

Organized by the Toronto Association for Democracy in China (TADC), the Tiananmen Square +25 Exhibit is now on display at the Credit Union lounge until Oct. 10, and is part of Ryerson’s 4th annual Social Justice Week. The exhibit displays panels of photographs that document the massacre and were taken from the archives of various media outlets from around the world.

Each panel of photos is accompanied by text written by Jan Wong, a former reporter for the Globe and Mail. It is translated into Chinese by Liane Lee, who belonged to the Hong Kong Federation of Students that was visiting the square at the time. Eyewitnesses to the tragedy, Wong and Lee describe the series of pictures, recounting chronologically the various demonstrations starting from April 1989 to the aftermath of the night of June 4.

It was on that night that student-led demonstrations for democracy and freedom in Tiananmen Square turned deadly. The Chinese government sent in the military with tanks to suppress the protests. The government’s swift and ruthless crackdown led to the killing of hundreds or perhaps thousands of civilians — the exact number of deaths is still uncertain.

Over the past few weeks, what began as a student boycott in Hong Kong has turned into a larger movement of citizens advocating for free elections. These recent demands bear a resemblance to the views of those advocating for freedom in 1989.

Speaking about the Hong Kong protests, TADC chair Cheuk Kwan says, “At first the citizens were striking only on campuses, but it has now evolved into a city-wide protest, with a lot of the major intersections being occupied by protesters.

“We hope that’s where the similarities (to the events of Tiananmen Square) end because we are very aware that China is going to stand firm and there might be bloodshed because China doesn’t want to lose face.”

Kwan says that he hopes the exhibit will spread awareness of the events unfolding in China. He also says that getting students involved in the commemoration has always been important to him. According to Kwan, it is poignant for students to continually fight for social justice.

“What these students were calling for is freedom of expression and political reform in Tiananmen Square,” says Kwan. “In Hong Kong, it’s for pro-democracy and freedom. They’re all looking to fight for the same thing.”

Winnie Ng, the Ryerson CAW-Sam Gindin Chair in Social Justice and Democracy, expressed her solidarity with the Hong Kong protesters during her inaugural speech for Social Justice Week. She came to Canada in 1968 as a foreign student from Hong Kong.

“Part of this exhibit is saying that for history not to repeat itself we need to remember. (The) photo exhibit is part of the remembrance,” says Ng.

The Tiananmen Square +25 Exihibit is one of five art exhibits on display until Oct. 10 at various locations on campus. 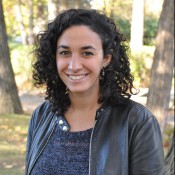 Emanuela Orsini was the Broadcast Managing Editor of the Ryersonian. She loves languages, travel and food.

Emanuela completed her Masters of Journalism at Ryerson University in 2015.

Emanuela Orsini was the Broadcast Managing Editor of the Ryersonian. She loves languages, travel and food. Emanuela completed her Masters of Journalism at Ryerson University in 2015.

10 Nuit Blanche installations you can still check out