Confessions of a crazy cat lady 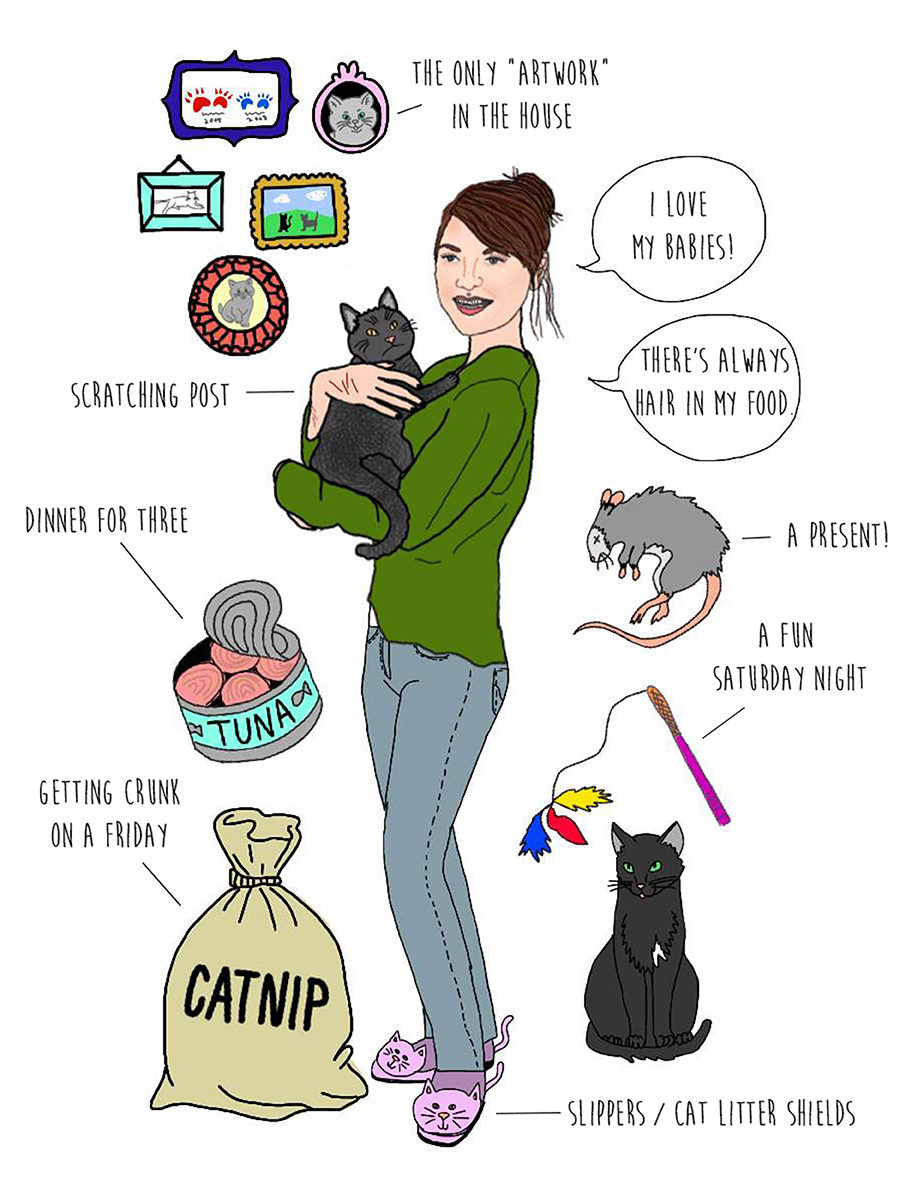 My name is Kara and I’m a cataholic.

It happened quickly and suddenly and before I knew it, I went from being a person who likes animals to a person who seriously considered buying a chihuahua-sized leash for my cats. I went from saying a simple “hello” to my cats to now having full-fledged conversations about my day with them.

Yes, I know what each of their meows mean. And yes, I know which one is meowing by sound alone. We are a family.

I live with my two furry, freeloading roommates in a one-bedroom apartment. My couches are perpetually covered in cat hair, kitty litter always seems to wind up in my bed and gone are the days when I peed alone. But it’s all worth it.

I will fight a person if they say anything bad about my babies. My old roommates can attest to this.

I found my oldest, Bear, in a pet shop when I first moved to Toronto in 2011. I hadn’t even lived here a month before I took her home in a cardboard box.

A few years later, I thought she would like some company, so along came Rocky, a rescue from the humane society. The little guy was found in a construction site, abandoned by his momma and nearly frozen to death — the thought almost makes me tear up.

I’ve always grown up with animals. I had a dog when I was younger and cats throughout the years. But it’s different when it’s a family pet. There’s less responsibility and ultimately less bonding. Not to mention, all my childhood pets were outdoor animals and roamed freely on our large property in British Columbia.

I never realized how animals can have such different personalities until Rocky and Bear were living together under my roof.

Bear is shorthaired with a sense of nobility and prestige. She sits perfectly still, sleeps in a perfect ball and daintily eats her food. If Queen Elizabeth II were a cat, she’d be my cat, Bear.

Then there’s my fluffball, Rocky ­­– he’s less like royalty and more like a court jester. He likes to snuggle in the morning, play fetch in the afternoon and chat the whole day away. He’s also desperate for attention, so if I don’t come home, he riots.

One morning, after a night out, I came back to find Rocky had pooped directly in front of his litter box, vomited on the couch, smashed a glass and ripped open the bag of cat food — even though his bowl was full. And yet, they’re still lower maintenance than dogs.

It’s not to say that I don’t love dogs, I do. But as a young student with a busy schedule and the potential to move all over the country, cats are a much more viable option. They’re independent but they still give you a great amount of love and company.

It’s not uncommon for Rocky to lay on half of my laptop keyboard as I’m working on school work. Or Bear to headbutt me for attention as I’m watching TV.

“Netflix and cats” is a lot more common (and more enjoyable) than “Netflix and chill.” Case in point: I am a crazy cat lady. And one cat shy of being single forever.

Sometimes I even think about getting a third cat, but I’m pretty sure that would be the point of no return. At least with two cats I can pretend they needed a friend, but with three … I probably just needed a friend.

But it’s true, the benefits of owning pets are undeniable. Therapy animals are trained to help people with disabilities (mental or physical). My babies aren’t professionally trained but the affection they give me is heartwarming, particularly on a stressful day.

Studies also show that the frequency of a cat’s purr is soothing to humans. It calms nerves, lowers blood pressure and can even help heal bones. Not to mention, cat owners have a 40 per cent lower risk of a heart attack.

In ancient Egypt, cats were worshipped and even bestowed the honour of mummification after death. The penalties for killing or injuring a cat were severe.

So, cats have pretty much ruled the world forever. Today, they especially rule the Internet.

Cats have become an Internet phenomenon. It’s nearly impossible to scroll through your Facebook feed without encountering at least one cat photo, cat meme or cat cartoon. YouTube has hour-long compilations of funny cat videos (I’ve probably watched them all). I started calling Snapchat “Snapcat” because I realized I only ever send pictures or videos of my cats. And it seems to be the majority of what I receive. The hashtag I use most often on Instagram is #catsofinstagram.

We don’t often get the opportunity to parade our beloved pets around like dog owners in the dog park. This might be one of the reasons why there is such a strong cat-loving community online.

Unlike dog owners, cat owners don’t have the luxury of taking our pets for a walk (I’ll be honest, I’ve considered it several times, but I really need to tuck that idea away and never think about it again, for fear someone might actually think I’m a real crazy cat lady as opposed to an endearing crazy cat lady).

Another theory suggests that cats are more interesting to watch than dogs. Dogs are animated, they acknowledge the camera and they’re eager to please. Cats, on the other hand, almost always have a nonchalant attitude — they couldn’t care less. It provides a sense of voyeurism and there’s humour in the fact that they’re unaware.

I’ve caught my cats with their tongues sticking out a couple times. They have no idea how stupid they look and it makes me giggle like a schoolgirl every time.

That’s another thing — cats are inherently cute. Baby-like features like large eyes trigger human affection. And even if they’re not cute, they’re cute for not being cute.

Take Grumpy Cat for example, with her scowl and constant sour expression.

Her photo was first uploaded to Reddit in 2012, and since then she’s become an Internet celebrity. She was featured on the cover of the Wall Street Journal, a replica for Madame Tussauds San Francisco was made last year and she inspired $1 million worth of Grumpy Cat products.

What dog can put that on their resume? Ain’t no Air Bud out there getting Internet famous.

So, yes I am definitely a crazy cat lady. I mean, seriously, I just wrote an article about how great I think cats are. I’m now shaking my head realizing that nobody asked for this.

But hey, if you’ve read this far, then you might be a crazy cat person too.

In so many ways, this artical is very true. Bathroom alone , ha! No more. My cat sits on my lap purring away. Cute artical !