Confessions of a former mean girl 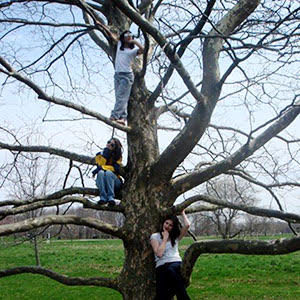 When I think back to Grade 7, most things are a haze. I had just started at a new school and I was well into my awkward stage. It was more than 10 years ago and my memories have since blurred into a combination of desks, colour-coded notes and the new uniforms that I had to wear; but I remember one thing clearly. That year, I became a mean girl.

We’re not talking the typical Regina George-style bully either. I was my very own brand of villain.

In my tween years, I was not popular crew material. My hair was pulled tight, my front teeth jutted out like the bow of a canoe, bridled back by multicoloured braces and my eyebrows resembled two fuzzy caterpillars inching their way back together.  It was not my best look.

My new school had uniforms, but it was still easy to separate the cool kids from the rest. I was convinced that if I could become friends with the girls who seemed to effortlessly glide through middle school, everything would be better. I would get prettier, smarter, happier, and even the food would taste better. I just needed to figure out how to get there.

Ironically, I figured it out in drama class. The teacher was doing her introductions and I interrupted with a smart-ass comment mocking something she said. The class burst into giggles and minutes later, the girls with the perfectly straightened hair asked me to be in their project group. By the final bell, I was in the car with my new besties, headed to one of their houses for a sleepover. I was in. That was when I figured it out; being mean could make me popular.

I knew I would never top the social hierarchy but I was intent on climbing as high as possible, and that meant making sure that there were people below me. This was not your typical schoolyard bullying. Girlworld was all about leaving marks that couldn’t be seen. At first I just went along with the popular kids’ protocol of selectively ignoring certain people, giggling when others went by, and spreading more gossip than a tabloid.

As a twiggy tween, it was easy for me to pick on people who were bigger than me. One day I happened to be around when one of the less popular, slightly larger students stepped onto the scale after gym class. By the end of the day, the entire school knew her weight.

On another occasion, I used  beach-day photos from a class trip  to publicize which bikini-clad classmates had the biggest fat rolls.

It wasn’t always about weight either. One girl in our grade had holes in her shoes, which inspired my crew to name her “hobo.” We later stole her duct-taped footwear and hid them behind the lockers, leaving her shoeless for the rest of the school day.

The “jokes” kept rolling in and as long as the right people were laughing, I considered my performance a success.

In order to get a clearer picture of what 12-year-old me was like, I hit the Interwebs hard. I sent messages out to friends, family and teachers (many of whom I hadn’t talked to since the age of Ja Rule) requesting stories to help piece together what really went down in those middle school halls.

“I noticed you change from moment to moment,” said one of my former classmates. “Running into you in the halls alone vs. seeing you interact with the ‘in’ girls in the big group, it was sort of night and day.”

I went to school with her for three years before I treated her as an equal.

On the day-to-day, my mean girl act mostly consisted of trying to keep up appearances.

“I remember nasty comments about the typical things – body size, clothes, not shaving legs/armpits/whatever, sexual orientation, choosing not to drink/have sex/whatever, and so on,” said another former classmate. “I remember the special type of subtle social bullying that girls are so good at – like blocking people out of conversations with body language, stopping talking when certain people walk by, looks of disgust, only spending time with certain ‘socially approved’ people.”

Getting in was only the beginning. Staying in was a full-time endeavour. Since I was hovering between popularity and social Siberia, I received the same mockery, judgment and subtle bullying that I was dishing out. The higher I climbed on the social ladder, the more unstable my footing became. Some days I was in and I would go home happy. Other days, I cried myself to sleep.

After two years of going up and down the social ladder, I was exhausted. My private school classes were small to begin with and I had made my social circle even smaller. Between the popular girls and whoever was the flavour of the week, I was only talking to about an eighth of my grade – and by high school, that just wasn’t enough.

In Mean Girls, Lindsay Lohan has the revelation that, “calling somebody else fat won’t make you any skinnier. Calling someone stupid doesn’t make you any smarter.” Lindsay and I may not have much in common, but that epiphany is something we share.  It seems so simple now but I realized that making fun of people who were less popular than me wasn’t actually making me more popular, and more importantly, it wasn’t making me any happier.

It was time for another change.

I had become a mean girl in middle school, so why couldn’t I become a decent human being in high school? Rather than trying to stay within the rungs of the social ladder, I hopped off all together and started seeing everyone on the same level. What I found were the classmates and soon-to-be close friends that I had overlooked just because I perceived them to be lower on the social hierarchy.

Some of the girls that then became my closest friends were people I had been in school with for years, but had never spoken to. Those are the people that I am still friends with today.

Though I recognized the error of my middle school ways, my mean girl past will always be a part of me.

“I remember once in Grade 12, you told me, ‘I used to be mean, but now I’m working on not being mean any more,’” wrote the classmate who remembered my nasty comments. “Hearing you recognize that you were mean let me fully understand that you were mean to me because you were mean, not because I deserved it.”

Reading messages like this reminds me that though I was a mean girl, I also found the means to be better.