Ryerson co-op student, Tuho Labonno, has had two jobs: one at an information-technology firm and the other at an insurance firm.

Labonno said that more than 60 per cent of workers at the middle-management level at her workplace are women. However, only four per cent held a top executive position.

According to a survey done by Catalyst, a Canadian research non-profit that works to advance women in leadership, 47 per cent of the Canadian labour force was comprised of women in 2016, compared to 37 per cent in 1976.

However, despite the increasing proportion, the survey states that women’s progress in reaching senior management positions is stalled, with only 37 per cent of positions held by women.

“I don’t want to call it learned helplessness but…I’m just used to it,” said Labonno. “(When) someone says, ‘Oh, these are the statistics,’ I’m just like, ‘Yeah, I knew that. Not a big deal.’” 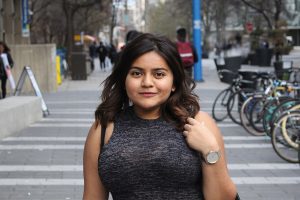 According to the study, men were two to three times more likely to be in a senior management position than women.

“The higher up you go, the less you see women, period,” said Gerald Hunt, a human resources professor at Ryerson. He explained that it is likely to vary depending on location and type of industry sector.

“(The) IT sector, for example, are not too bad (at hiring) visible minorities, but are terrible on women,” he said.

Labonno described a conversation she had with the chief information officer (CIO) of the insurance firm she worked at on the topic of gender diversity.

“He said, ‘Oh we absolutely know what’s going on,’” she said, adding that he did express a desire to change it.

“I asked him how can we change it … and he said, ‘Tuho, if there’s a will there’s a way. Just work hard and you’ll achieve it,’” she said.

This contrasted with another conversation she had with a female executive at the same firm.

“She said, ‘Still, the realities for a woman is very different from a man. It’s always a battle, always a grey area,’” said Labonno.

“Maybe it’s because a lot of the people in the management roles are very homogenous in terms of their ethnic grouping, which is something I’m sure we all do,” said Margaret Yap, a human resources professor at Ryerson.

Visible minorities encounter the same experiences as women, with only a few making it to senior management roles in organizations.

“I wouldn’t say that this is for typical types of corporations,” said Jeffrey Reitz, a University of Toronto sociology professor.

He said that the disadvantage stems from negative stereotyping of visible minorities in current culture and that this stereotyping becomes “more intense as the status of the job arises.”

Along with Ryerson professor Rupa Banerjee, Reitz co-authored a study which found job candidates with Asian-sounding names are less likely to be called for an interview even if they have a better education than their Anglo-Canadian counterparts. As a result, Ottawa is now piloting a “name-blind recruitment project” in which names are removed from job applications to avoid unconscious bias.

The practice completely changed the demographic of the Toronto Symphony Orchestra when it was first implemented in 1980. Although it used to be made up almost entirely of white men in the 1970s, the project drastically changed the makeup to almost half female and much more diverse.

“We were quite pleased as this was one of our recommendations,” said Reitz. “The concern now is to see the details and how they’re going to do this.”

“People who are concerned that changing the procedure, I think, are worried about what it might show. I hope that concern doesn’t carry the day.”