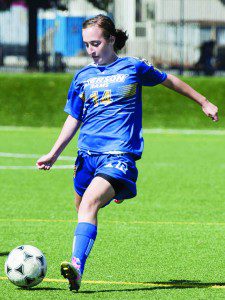 Shannon Cosgrove enjoyed a lifelong love affair with soccer. But after 17 years on the field, the fourth-year business student and former Rams midfielder has now found a home on the sidelines.

Cosgrove started playing when she was three, but last summer, she suffered a knee injury during training that kept her on the bench this season.

“I was running track when I felt a weird pop in my knees,” she said. “Turns out my kneecap had shifted.”

Doctors diagnosed Cosgrove with patellofemoral syndrome, or pain in her knee, the result of a shifting kneecap.

Losing her spot on the team because of her injury was a harrowing experience for Cosgrove, who says she had to choose between the game she loves and her health. Since then, she has blossomed in her new role as the team’s manager.

She says choosing to stay on the sidelines was one of the hardest decisions she has ever had to make.

“An athlete never wants to step back from the game they love,” said Cosgrove, in a webcast with The Ryersonian.
Cosgrove said it was Coach Kevin Souter who helped her make the choice.

“He talked me through it and said, ‘you know your health is your number 1 priority. Being able to walk when you’re 40, playing with your kids,’ that was his number 1 concern,” she says.

Even though Cosgrove’s role has changed, midfielder Erika Huculak says she is closer to the team than ever.

“Shannon’s always been sane-minded and normal, so having her on the coaching staff, she’s now more of a mom to us – but in a good way,” said Huculak. “She’s always looking out for us. We’ve gotten closer that way.”

Having been with the team for three years, Cosgrove says their time together is about more than soccer.

“We’re not just a family. We’re a Ram-ily. I couldn’t imagine my fourth year without them,” said Cosgrove. “The girls were really supportive, it’s the best thing I could’ve done.”
As manager, Cosgrove attends every game as well as doing her best to be at every practice.

Huculak said Cosgrove always has everyone’s interest at heart and is never selfish.

She also said it was tough for the team to see her suffer the injury, but having her around in a managerial role makes it seem like she never left.

“She has the best organizational skills and she is the perfect link between the head coach and the players because she knows how a player would want to be talked to,” said Huculak. “She’s there for support when any of us has any problems – on a personal level as well. And she can relate that back to the coaching staff in a professional way.”

Still, the first few games were pretty difficult for Cosgrove to sit on the sidelines, she says.

“It was hard to watch them on the field. I remember thinking, ‘I can do that too,’ but I know that my health has to come first, so I’m happy with my decision.”

Although she feels she made the right choice, there is still some uncertainty about her injury.

“What’s frustrating is that I still don’t know what’s actually wrong with my knees or why that happened,” she said. “To this day, doctors still don’t have a grasp on exactly what the issue is. What they suspect however, are early signs of arthritis.”

Her family, unsurprisingly, was also happy with her decision to put her health before soccer.

“My mom was the one encouraging me in second year to quit, for my health,” Cosgrove says. “She used to see how much pain I was in. ‘You’re going to regret it when you’re older,’ she would tell me. I told her you can’t quit something you love. You just can’t.”

And Cosgrove, who says soccer is still a huge part of her life, never has.