With Halloween approaching, Ryerson student groups and course unions are preparing to deal with costumes that offend, rather than scare.

The issue of culturally insensitive or offensive costumes comes up every year at Halloween. While Ryerson doesn’t have an official policy on what students are allowed to wear to holiday-related events, some student groups and course unions choose to enforce their own rules.

A Nightmare on Peter Street is an annual Halloween party hosted by the graphic communications management, creative industries and RTA course unions. This year, they posted a statement to the event’s Facebook page, warning students that offensive costumes would not be welcome.

“…We are very aware that Halloween has had issues with cultural appropriation in the past. We are striving to make this event as inclusive – and keep the atmosphere as welcoming – for everyone as possible,” the statement said.

“We are aware of the recurring issue with cultural appropriation and Halloween costumes, especially in universities and colleges. As result, we wanted to get ahead of the issue,” said Samantha Chung, the GCM Course Union’s president.

The morning after the party, Chung said that “the event went smoothly and was a huge success. Our efforts to keep the environment as inclusive, welcoming, and safe for everyone adhered to our intended plans. There were no issues with inappropriate or cultural appropriating costumes.” 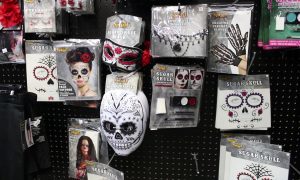 Another popular Halloween event at Ryerson is RU Student Life’s annual #RUScared Halloween costume contest. The contest hands out prizes for costumes in several categories, and because submissions are done through social media, the organizers have less control over what people wear and send in.

Tesni Ellis, who works for Student Affairs Special Projects for RU Student Life, said that they have not had any issues with offensive costumes in recent years. “In terms of regulation, if we saw something that didn’t meet our standards as a community at Ryerson, then we would take that as an opportunity to educate the student(s) on why their costumes were inappropriate and likely wouldn’t include their photos in the contest gallery.”

OmiSoore Dryden, a visiting professor in the Faculty of Community Services who specializes in gender, race, and racism, believes that while social media has exposed problematic sides of society, it has also aided the discussion.

“Mainstream media has often ignored the experiences of traditionally marginalized folks. Social media has allowed us to get our voices out there, and this is a more balanced conversation than has ever occurred,” she said.

A key point to keep in mind, Dryden pointed out, is that Halloween doesn’t exist in a vacuum. Racism, sexism and homophobia are also reflected in people’s costume choices.  “Education requires guidance, direction and at times, regulation,” she explained.

“Just because people do not believe they are intentionally doing harm, does not mean that harm hasn’t occurred. People still need to take responsibility for their actions – and this includes the costumes they chose.”