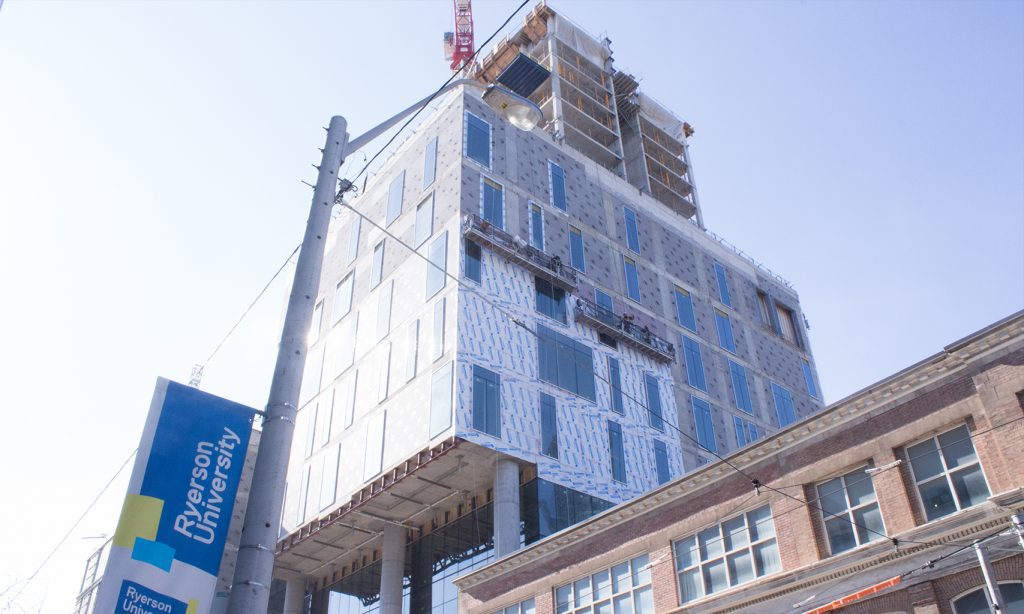 The Daphne Cockwell Health Sciences Complex (DCHSC) will open in the fall of 2018 as planned, but its residences won’t be ready to accommodate the first full group of students until the summer of 2019.

“The residence tower has been delayed due to weather and approval delays and will be finished December 2018,” Ryerson public affairs said via email.

Some rooms will be available as early as January, as well as for summer residence and conference housing. Students will begin moving in for the 2019-2020 school year in late August.

The residence will accommodate 332 students in 100 units across 18 floors, according to the Ryerson website.

DCHSC has 33 floors, including four that are underground, covering a total 332,604 square feet of floor space. Basement levels two through four include 155 parking spots, while the lower level one has space for 184 bicycles.

Four schools out of Ryerson’s Faculty of Community Services will hold classes in DCHSC: nursing, occupational health and safety, nutrition and midwifery. Some students enrolled in the collaborative nursing program between George Brown College and Ryerson will also have classes in the building.

According to public affairs, other features of the building include:

The building also has elements that make it more sustainable, such as a green roof on the eighth floor for farming and a water collection system that uses “grey water” from showers and sinks to flush toilets, which reduces water use, “by millions of litres per year,” it said in the email.

The DCHSC, which was first announced in the fall of 2013, began construction in late 2015.

The estimated cost of the building is $80 million, of which the Ontario government provided a $56.4-million grant, while Ryerson covered the rest, the email states.

“Perhaps the most exciting feature of this building is the multifunctionality of this hub,” public affairs wrote in the email.