In the future, people will let their right to privacy slide. Computers, in our homes, cars and bodies can be easily hacked and exploited. Big data and algorithms can be used to determine who is a terrorist and automatically target them with with missile-firing drones. Governments and security agencies can look into your home with impunity, through computers, televisions and iPhones.

If you’ve been following the news lately, you probably know that this future has already arrived.

Canadian-born author Cory Doctorow worries about the future, but at least he’s doing something to make it a better one.

The internationally renowned technology activist, author and editor at Boingboing — a zine-turned-blog that covers technology, sci-fi, and left-wing politics— encouraged students to take charge of their online privacy during a talk at Ryerson on March 10, hosted by Ryerson’s Faculty of Communication and Design.

Here are five takeaways from Doctorow’s talk, from his thoughts on Facebook to his hopes for the future.

When you think of a computer, the first image you have in your head is probably of that box and screen sitting on your desk at work, or the laptop you used to binge-watch Netflix until 2 a.m., or maybe even the computer in your pocket that also happens to make phone calls.

But Doctorow says these computers might be more involved in our lives than we think.

“Your car is a computer that you drive down the DVP in at about 120 kilometres an hour,” says Doctorow.

Protecting your privacy is about more than turning off your computer or chucking your phone out the window. Phones now double up as computers, and computers are now installed in cars. Everyone needs to care about the regulation of information technology, says Doctorow, because computers are incorporated in every corner of our lives.

“The regulation of information technology is the foundational question on which all the other questions turn,” said Doctorow. “It’s not that its destiny is more important than environmental catastrophe or fights about gender equality or fights about racial and other forms of equality. It’s just that all of those fights are going to be won and lost on the internet.”

If you think Facebook’s targeted ads are creepy, Doctorow wants you to know that Facebook knows more about you than you think.

“Facebook now knows every single salient fact of your life, including things that are unbelievably compromising,” he says. “If you were asked how much you would charge someone to know these facts, you would ask for some unbelievable sum or say, I’m sorry that’s not for sale, and yet they know all these things about you.”

He admits that renouncing Facebook today requires some sacrifices. Chances are you’ll miss out on a few parties. But, “as the (concept) of Mark Zuckerberg as a creep kind of spreads,” says Doctorow, “that normative question of I don’t use Facebook — not because I’m some kind of weird information vegan, but because Facebook is poison — will become more socially acceptable.”

If you’re not creeped out yet, consider the issue of mass surveillance. It’s way more pervasive than you think, says Doctorow. The reason it’s so easy to spy on you, he says, is because it’s so cheap, and surveillance is cheap because we’ve adopted societal norms which undervalue privacy. People don’t bother using encryption technology which would make it much hard for others to peer into their lives.

If people prioritize privacy, a future is possible where technology isn’t an instrument of coercion and surveillance, but rather acts as “a nervous system of the 21st century that’s rooted in privacy and respect for human rights” is possible, says Doctorow.

You may think you have nothing to hide, so why care about privacy?

Doctorow has a couple responses to that argument.

“We sometimes conflate privacy with secrecy. There’s a lot of things we do that are private that aren’t a secret,” he says. “I know what your parents did to make you, but most of us choose to do that behind closed doors, not because we’re ashamed of it but because it’s just nobody else’s business”

He also says that guarding your own privacy will protect those around you.

“The more marginalized you are in society, the more compromising things there are about your life,” explains Doctorow. “You have an affirmative duty to the people that you love, who don’t have that privilege, to exercise privacy, because otherwise the only people who exercise privacy are people who do have something to hide.”

Doctorow says he doesn’t call himself a pessimist or an optimist, but says that he is hopeful.

“Hope is why you try to solve the parts of the problem that you know how to solve,” says Doctorow. Even if things turn sour, he jokes, and we end up with Skynet and Soylent Green factories, “at least you can go to your deathbed knowing that you didn’t give up.” 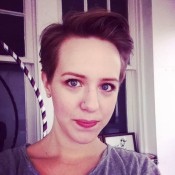