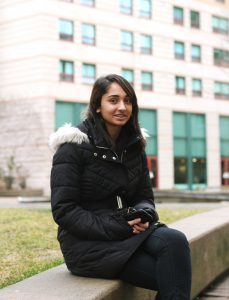 Maybe it’s because I’m graduating soon, but I’ve been thinking a lot lately about the dreaded d-word: diversity.

Why is it dreaded? Hard to say, really, but as a South Asian female in the media industry, I have a theory. Granted, my experiences are limited to my 21 years, so I’m by no means an expert and I’m the first to admit that. But there is some merit in reflecting on issues that are near and dear to you, even if it is just a small exercise in self-reflection that will be taking place as I round out my undergrad career.

Year after year, I’ve sat in lectures, meetings, panel discussions – heck, even on the subway – and heard people preach about diversity. But I’ve begun to think more critically about who is preaching this and their possible motivation. And this is where another dreaded word comes in: quotas.

Quotas are disheartening, mainly because they are often set by people who are in positions of authority – in my experience, white males. Quotas seem to enforce this problematic idea of diversity for the sake of diversity, which is not what we should be trying to get at.

There should be genuine efforts on the parts of high-ranking editors, public officials and employers to recognize the reason behind why diversity is important. It’s not rocket science; the diversity of experiences in a newsroom for instance will likely mean there are diverse interests and a greater number of topics to be covered. And isn’t that what the media is supposed to do? Isn’t that what one of the most common criticisms about news media is? The lack of coverage on topics that don’t fit the public domain? Of course, that’s a discussion for a different day, but it doesn’t mean it’s not a conversation not worth having.

If merely filling a quota and placing a checkmark next to a box is the driving motivator behind why a 21-year-old South Asian female like myself is hired, there is something wrong. And something needs to be fixed, reconsidered, looked at again – choose whichever phrase you like. But until people recognize that I am not a phrase, a number or means to their end of filling a quota, true diversity cannot be achieved.

Don’t get me wrong – I’m not advocating for an “I see no race” mantra. It’s quite the opposite, actually. Race is extremely important in today’s world. Speak to your friends and try describing a person they don’t know without mentioning their race or ethnicity – it’s nearly impossible. In a world where police reports identify a suspect as a “21-year-old South Asian female,” it’s clear the standard boilerplate model for identification follows this age, ethnicity, gender structure.

That’s why, when reading a peer’s piece on diversity in journalism, I was a bit thrown off when she stated, “I couldn’t understand how the most relevant identifier…was their ethnicity.” The degree of relevance is, much like many other things in news media, up for debate since there is no hard and fast rule for organizations to follow.

But I’d caution against saying something is relevant in the world today, and that it should or should not be. As journalists we are practical – we want to reflect what is going on in the world as it is, but our motivation behind doing so can be read into as advocacy work for a certain stance on an issue – that is, how things should be. We go from being descriptive to prescriptive.

Having worked closely with the author of that piece over the past year, I can say I’ve grown to genuinely respect and appreciate her stance on diversity, ethnicity and race issues. While I question some of her points, my overall argument remains quite the same: as a minority and first-generation immigrant living in Canada, my identity as an Indian female will always be in the back of my mind.

So, you’ve got two females, both in their senior year at Ryerson. Both have different opinions but the same overall argument. And that’s the point – two diverse females, and already you’ve got two diverse opinions with an interesting conversation. That’s what newsrooms need today, more than ever.

Sam the Record Man signs have a new home