Divest Ryerson: no more fracks to give 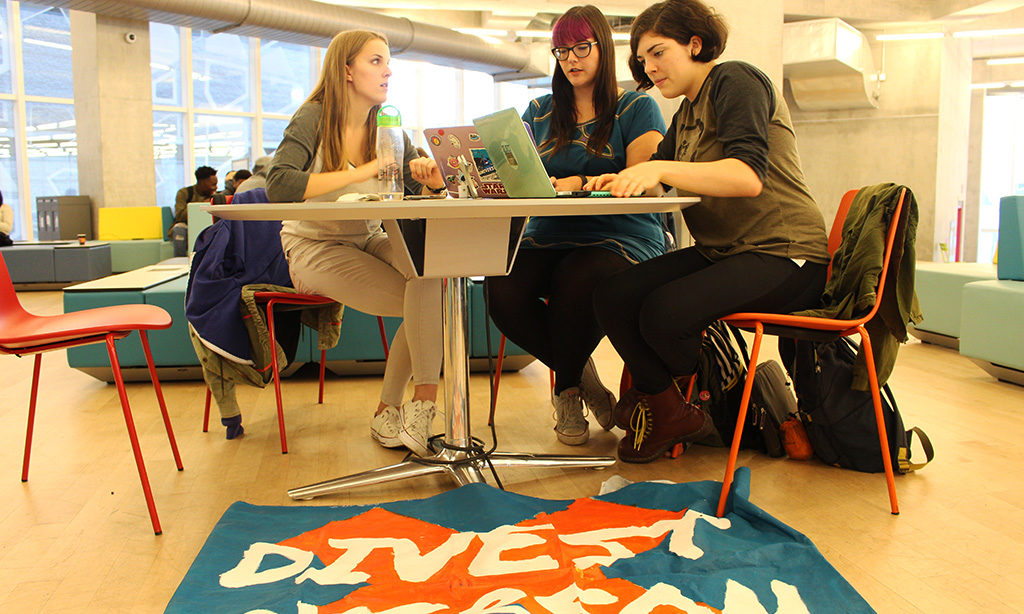 Before the protest at Parliament Hill, not much was being said about Divest Ryerson.

The arrests of two core members, Ben Donato-Woodger and Emma Beattie, put Ryerson on the map in the fossil fuel divestment movement. While protesting against the Kinder Morgan Trans Canada pipeline expansion project, they were among 99 people arrested for climbing over a barricade. In the end, they were let off with a warning. However, Donato-Woodger said the action brought about more than 6,000 views onto their Facebook page.

Beattie said that it was definitely a good way to start conversations, especially with people she didn’t even know were interested in the movement.

The group’s ultimate goal is to get Ryerson to stop investing — or to divest — from the fossil fuel industry.

As of the end of September 2016, Ryerson had $4.5 million invested in the fossil fuel industry. With an endowment fund valued at roughly $125 million, that amounts to just under four per cent of the school’s total investments. These funds are pooled together with other universities and institutions and are managed by a third-party investment firm called Fiera Capital.

“So the pool itself has a statement in investment policies and procedures, so when you enter the pool, you agree to the guidelines around that pool,” explained David Pennycook, vice-chairman and executive vice-president of Fiera Capital’s institutional markets.

“Are you a bad polluter, or do you fall under the guidelines of what is acceptable in that industry,” Pennycook explained.

But, Donato-Woodger argues that these considerations aren’t enough.

“You’re still choosing between companies that are not in line with the climate science. 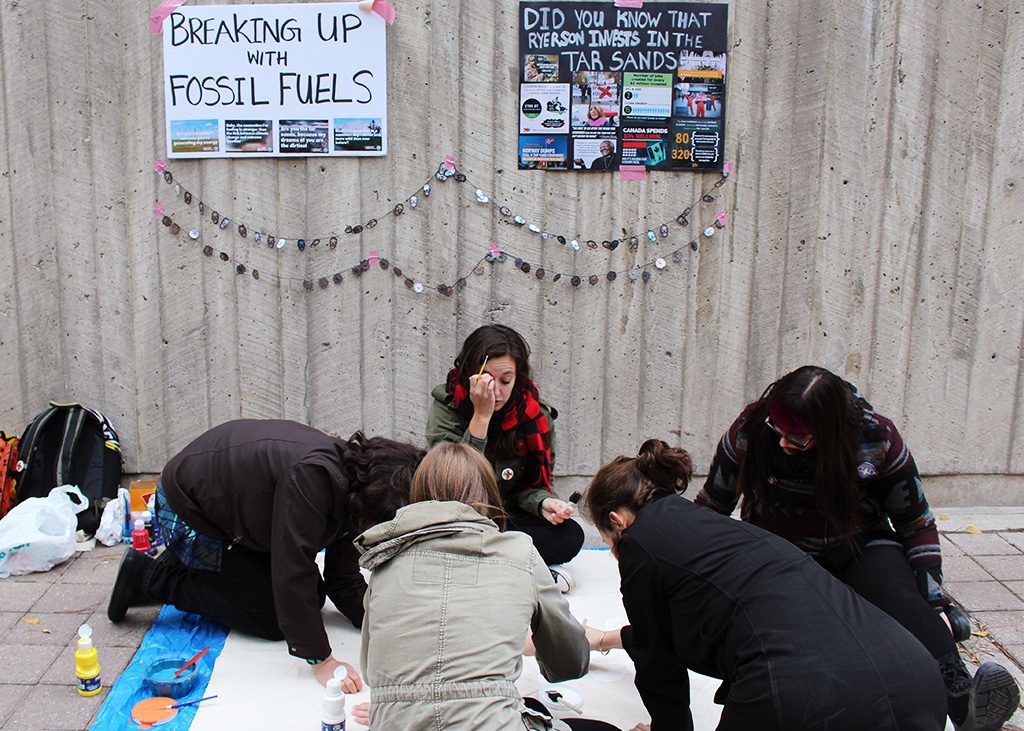 Members of the group banner painting to spread awareness on campus. (Catherine Machado)

His group calls for divestment are not the first of their kind. Actually, they are far from it. Across the nation, students have been calling for their universities to divest from the fossil-fuel industries. Donato-Woodger became involved in the movement in 2013 while studying at the University of Toronto. He led the divestment campaign there to what was considered a near-success.

“I came to divestment as I came to understand in my now decade of being in the climate movement that it’s not just that people don’t understand, it’s that the fossil fuel industry has too much power,” said Donato-Woodger.

The energy sector in Canada is worth just under $400 billion.

“I’m not labouring under the delusion that the fossil fuel industry will fall if all universities divest,” said Beattie.

Donato-Woodger explains that what they are looking to do here is take away the fossil fuel industry’s social licence. Beattie adds that although divestment action is largely a symbolic act, it is still extremely powerful.

“The divestment movement is a social phenomenon,” according to Wayne Wachell, CEO of the fossil free investing firm Genus Capital.

He said as more people do this it creates more awareness and puts more pressure on other universities to divest. This ultimately stigmatizes the energy companies to change their behaviour.

Wachell said there are two reasons why people divest.

The first reason is that they are concerned about climate change affecting their brand.

“You better walk the walk, if your actual values are focused on sustainability your portfolio investments must be aligned with that,” said Wachell.

The second reason is the financial risk. He said that fossil fuel investments are at risk of becoming stranded assets, or  unstable investments, if Canada is serious about adhering to the calls to action outlined in the Paris agreement. What Wachell is referring to here is the new international law that calls on countries to keep the global temperature from rising no more than 2 degrees Celsius per year. This means reducing greenhouse gas emissions.

“If that is the case, that will leave half the fossil fuel reserves in the ground,” he said.

“The oil price is a roller-coaster that (Ryerson) should get off as soon as possible,” said Donato-Woodger.

He looked back at U of T’s management of its campaign as an example of what not to put up with at Ryerson.

“We’re looking for transparency and accountability, two things that U of T doesn’t have,” said Donato-Woodger.

During U of T’s campaign, there was an advisory committee put in place to consider the group’s call for divestment. The committee was told that it was going to get copies of the minutes from their meetings, but they never came through. They had actually recommended in their report that the university adopt a targeted strategy to begin divesting from fossil fuels. However, he said that during the final decision the president announced that he made three committees that no one knew about that gave them the ultimate no. He said that for these reasons and more, he is afraid of a committee and warned against the time delays in repeating the research. 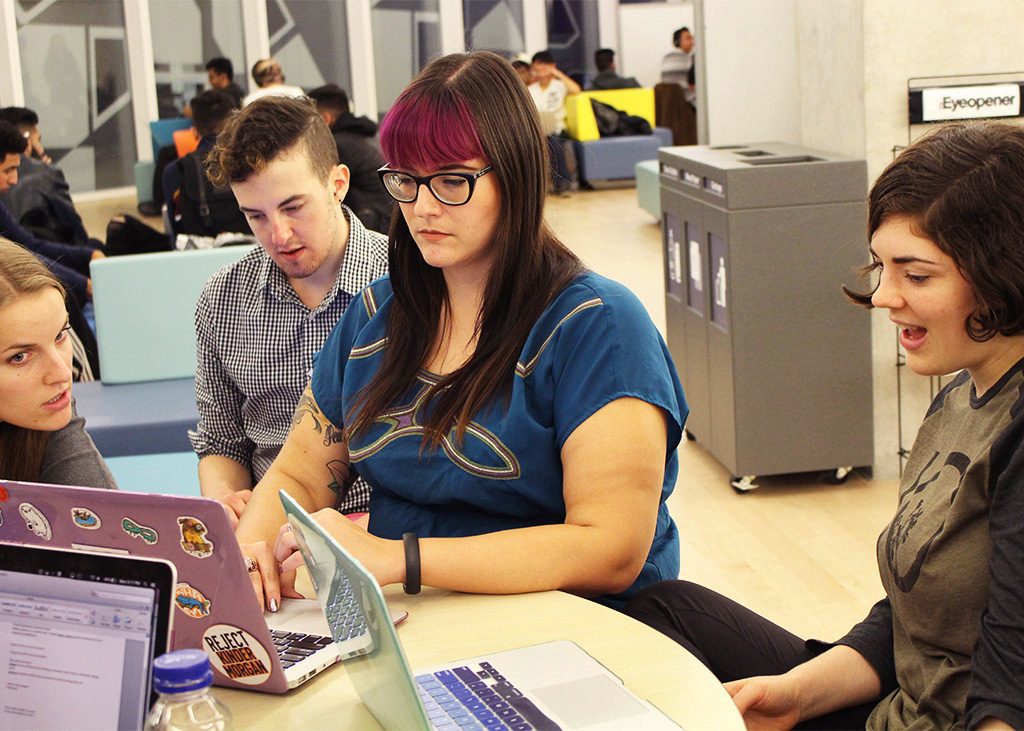 Organizer Emma Beattie goes over an e-mail to the president’s assistant. (Catherine Machado)

“I think that we’ve actually had enough committees from different universities on fossil fuel divestment and Ryerson doesn’t need to repeat it,” said Donato-Woodger.

He said he would strongly discourage Ryerson from putting forth a policy that would stifle this debate. He has faith Ryerson will prove a more progressive school.

“I think that fossil fuel divestment is a way that Ryerson can live up to that reputation,” said Donato-Woodger.

President Mohamed Lachemi said that he knows these issues around divestment are an important topic right now but, “it’s not necessarily done as a result of a protest or people that are making noise.” He said it requires thinking about what are the best ways to invest Ryerson’s funds. Lachemi said that he is sure that with time universities will pay “extra attention” to the way that they invest money in the country. But for now, he is open to having the conversation.

Divest Ryerson will be taking the president up on that offer in due time.

“We have been in contact with the president’s office and we are setting up a meeting to talk,” said Beattie.

She said that they will present their petition of more than 1,000 signatures and begin the conversation on how the divestment process at Ryerson would look.

“Ryerson hasn’t divested from anything, so there’s no precedent,” said Beattie.

In Donato-Woodger’s opinion, Ryerson is more progressive than any other university in Canada.

“Ryerson should keep it up and remain in the lead by becoming the first university in Canada to formally support fossil fuel divestment,” he said.