There’s a new way for students to explore Toronto and get from the Sally Horsfall Eaton Centre to a Ted Rogers School of Management class on time: Dropbike.

“Dropbike gives them a way of taking biking as a means of transportation to get to all the different things they do in a hyper-convenience.”

After putting down a $49 damage deposit, which can be retrieved at anytime, Ryerson community members can rent the bright orange bikes starting at $1 an hour. New users also get three rides free when they sign up. 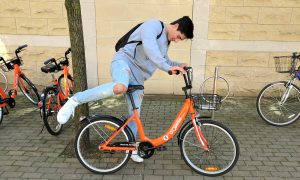 Dropbike will be available to rent across from Pitman Hall and at the Student Campus Centre.
(Photo by Shantia Cross)

Orange dots on the app’s map indicate how many bikes can be found at designated Dropbike racks and parking areas, known as Havens, at any given time.

The two Havens at Ryerson are located at Pitman Hall and the Student Campus Centre.

City councillor for Toronto Centre-Rosedale Kristyn Wong-Tam, who has helped invest over $1.5 million into Bike Share Toronto’s bikes and docking stations in Ward 27, said students are driven by both economics and convenience.

“In many congested, downtown cities where traffic vehicle or volume is heavy, cycling is clearly the faster and better way, and of course, it’s much more economical,” said Wong-Tam. “There are some obvious benefits from that vantage point for Ryerson students.”

Dropbike is unlocked when a user opens the app and scans the bike’s QR code to receive the lock combination.

“During the period of time you rent the bike it’s completely yours,” said Meacher. “You can bring a bike to Peru if you wanted.”

“Riding across most of Toronto can be done in 30 minutes,” said Foppiano. He gets each 30-minute ride free with his current bike share membership.

“Of course I want a start-up with bikes to succeed,” said Foppiano, “but I’m skeptical.”

The bike enthusiast said he thinks Dropbike is competing with a cheaper product that has more stations—Bike Share Toronto  has four stations on the Ryerson campus—and a higher quality bike.

While the Ward 27 councillor said she doesn’t think Ryerson’s Burlington and Scarborough commuters will use Dropbike to get to and from school, she said the bikes could work well for errands in the downtown core.

“If it’s a dollar an hour then that’s even cheaper than the TTC,” said Wong-Tam.

Dropbike first launched in the city at the University of Toronto campus in June. All bike posts and racks are Havens on their campus.

Today there are nearly 1,000 users in Toronto, according to Meacher.

Dropbike may add more Ryerson Havens in the future depending on ridership numbers in the Ryerson area.

For now, Meacher said Dropbike is happy with the two on-campus locations.