Could Doug Ford be the next former mayoral candidate to teach at Ryerson? Ford said he would love to teach at Ryerson one day in a guest lecture to mechanical and industrial engineering students on Thursday. The former Toronto councillor even sent out a call for resumes from the dozens of students in attendance at the lecture about good business practices.

Ford talked about Lean Six Sigma business practices, a method of improving team performance. According to Lean Six Sigma Canada, the business philosophy “combines the two most important improvement trends of our time: reducing the variation of the process and making work better as well as making work faster and more efficient.”

He also spoke about building strong relationships and customer service excellence as president of his family business, Deco Labels.

“The worst thing you can do as a manager is stop listening to your team,” Ford said.

He also touched on improving efficiencies in Toronto as a city hall councillor. Ford and his brother, former mayor Rob Ford, saved the city $11.9 million by privatizing garbage pickup west of Yonge Street in 2011.

He told students he hopes Mayor John Tory will continue to save city-hall spending by outsourcing garbage collection across Toronto.

“I hope the present mayor has the backbone to do it,” said Ford.

When asked if he plans to follow in Olivia Chow’s footsteps and seek a teaching position at Ryerson, Ford said that he hopes to teach at Ryerson when he has more time in the future.

“I was so pumped for today. I love speaking to young people,” he said.

Ford told the class to class to send him their resumes and that he would send them out to his old City Hall colleagues and business partners. However, he made no guarantee that this would lead to a job or internship.

“I learned a lot about Doug himself and how his application was used in the city of Toronto. He’s very good at holding the room,” said Ryan James, a fourth-year mechanical engineering student.

Student Ivan Hang thought Ford’s excellent speaking and leadership skills would help him succeed as an instructor at Ryerson.

“Engineering classes are sometimes boring. A lot of people skip because they fall asleep,” said Hang. “In terms of sheer relevance he’d be able to project and convey as a teacher.” 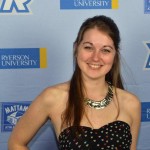 I’m a child of divorce — and happy about it