Coun. Doug Ford speaks to The Ryersonian during a trip to campus. Ford made his mayoral debate debut on Tuesday. (Ryersonian)

Speaking in front of a room full of Ford Nation supporters Tuesday night, Coun. Doug Ford reintroduced his brother’s platform as his own during his first appearance at a mayoral debate.

Doug Ford hadn’t participated in any debates since he registered to run Sept. 12, when he took the place of Mayor Rob Ford, who was forced to withdraw after the discovery of a malignant abdominal tumour.

At the debate at a west-end high school, Ford tried to link himself to his brother, frequently using the term “we” when discussing Rob Ford’s work as mayor.

“We went in there and we cleaned up house,” Ford said. He then made a reference to the expensive New Year’s Eve parties councillors used to have, saying, “We stopped the gravy train.”

Ford, who comes from a wealthy background, accused mayoral candidate John Tory of being too far removed from low-income families to be able to understand their situation.

“You know John, you’ve had a pretty easy ride,” he said. “I know you’re used to having everything handed to you on a silver platter.”

“How many standing committees are there, John?” Ford asked, also questioning the last time Tory was even at city hall.

“I think there are five,” Tory answered incorrectly as the crowd laughed and applauded Ford. There are seven standing committees.

Ford also had to deal with comments about the family’s shady past.

“I saw our mayor on the front page,” mayoral candidate Olivia Chow said disapprovingly, when answering a question about how she would market Toronto for tourism. She went on to criticize the mayor for not representing the city well and was met with boos and jeers from the crowd.

Like the mayor, Doug Ford was also asked if he would attend Pride — an event that his brother has notoriously missed every year — but he evaded the question, saying only he believes in equality.

Still, Ford appeared to have pleased a room full of Ford Nation supporters by sticking to his brother’s discourse.

“Stop the gravy train,” Ford said in his closing statement. “We’re fighting for the everyday average person. We’re just like you.”

“I’m here for two simple reasons,” he said to the rowdy crowd. “I love this city and I love the people in it.”

A recent poll has put Ford in second place, behind Tory.

Our live blog of the event can be found here. 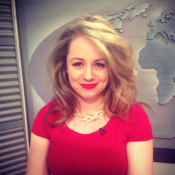