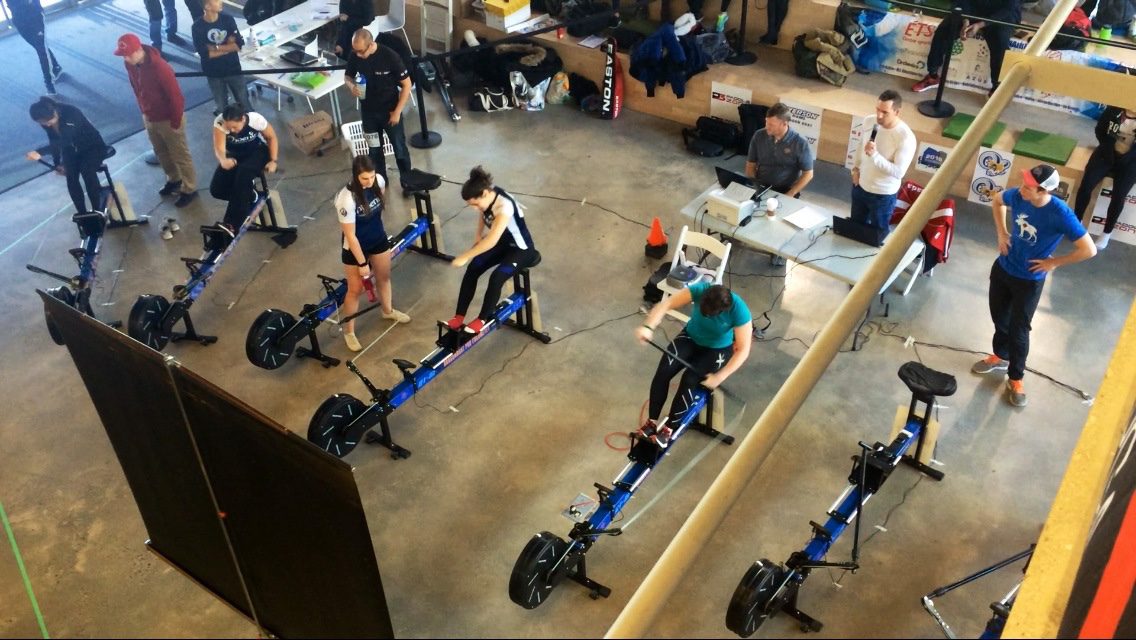 Ryerson’s dragon boat club won 15 medals when it hosted the fourth annual Ontario University Indoor Championships on Saturday at the Student Learning Centre (SLC). Those winners are listed below.

Ryerson hosted the event two years ago at the Mattamy Athletic Centre, but this year P3 Paddle Zone asked them if they could have it in the SLC, hoping to introduce the sport to more students. In all, 12 university teams and individuals took part in the all-day tournament.

What initially started off as a competition of almost 15 racers has grown to become the biggest off-season event leading up to training and tournaments in the spring. This year, 120 racers registered for the event to participate in 33 races where they were divided to compete against other students to test their agility, speed and performance.

Nick Fan has been a member of the dragon boat team since 2003 and paddled for four years before becoming the club supervisor. He says the sport itself has really grown since he first started and the club now has close to 100 members.

“We run one of the largest student clubs on campus and we are interesting in the sense that this is not only a sport — it’s a club for people to get together, meet people and have a chance to find something fun to do,” said Fan.

He says that Ryerson’s team brought 46 paddlers to the competition, allowing students and alumni to test their skills while other team members assisted in coordinating the event.

Any team member or individual interested in joining the event was able to register with no dragon boat experience necessary.

“We definitely go by the ‘anybody and everybody’ concept,” said team member, Kim Angelo Santos.

Although paddlers were in a competitive environment, the purpose of the event was to help prepare teams to compete against other universities later this year.

Paddlers raced individually against eight competitors on a rowing machine called a KayakPro D1 Ergometer, which measures the fastest rowing times. The racers were able to see how they compared to their competitors by viewing the race live on a large projection screen.

“Indoor pool practice gives us simulation of the water but there’s really no dynamic feedback,” said Fan. “In the past, these machines weren’t really used a lot but over the years, the sport really picked up and these machines are a big part of regular boat training now.”

First-year fashion student Akshita Tandon initially joined the team to stay athletic during the school year but this paddling experience has become much more than that.

“I know when I go to races, I’ll be paddling with a team but by competing alone today, I’m in a different mind set and I want to be able to use this experience to hold up my part when we are under pressure in a tournament,” said Tandon.

Each machine created a virtual experience for racers to see their placement throughout the races and the results immediately showed the ranking of each participant.

Rowers have to wait until late May for the water season to begin, but Santos sees the event as a great mid-point before the full team experience.

“We can all gather as a team because these are pretty much the same people we are going to see at the regattas as opposed to training by ourselves and not seeing each other,” he said.