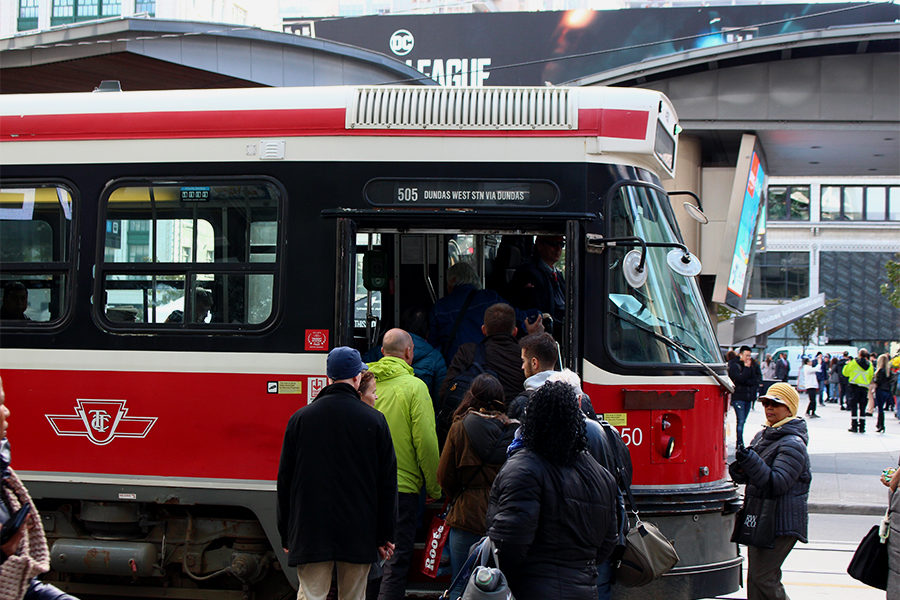 People boarding the 505 westbound streetcar at Dundas and Yonge. Photo by Jenny Zhen.

There are changes coming to streetcar routes near Ryerson’s campus.

The 505 Dundas and 506 Carlton streetcar routes will be changing to buses starting Feb. 18. According to the Toronto Transit Commission (TTC), the replacement will be in effect until at least 2019.

The replacement will allow the legacy cars “that remain reliable and roadworthy, to be available for service on routes, like King Street, where demand is critical,” said the TTC in their monthly CEO’s report.

Kira Murray, a fourth-year interior design student at Ryerson, takes the 506 Carlton route to get to campus and wasn’t aware of the upcoming switch. She’s concerned about the switch after having bad experiences with the 511 Bathurst streetcars being changed over to buses last September.

“It’s annoying, I hate it,” said Murray. “It doesn’t come often enough and it’s always crowded, which the streetcar was anyways, but I feel like (buses) just made it worse.”

Hayley Waldman, a representative of the TTC, says that the TTC acknowledges that buses hold less passengers than a streetcar would.

“We will need to add more buses to replace streetcars in the peak periods in order to meet ridership,” said Waldman.

“I didn’t know they were being changed to buses, but no, I’m not worried,” said Tannis. “Sometimes buses are faster.”

When it comes to her commute to Ryerson, Murray said she won’t put up with delays on the bus.

“I’ll probably not use the TTC as often, I’ll probably just walk,” said Murray. “They always say that they have more buses but they don’t come at a normal amount of time. There will be three in a row and then none for 10 minutes and then there’s a huge lineup of people waiting.”

Does RU care about their whale-being?